The shop is an area found on all League of Legends Fields of Justice where champions can purchase items to augment their capabilities on the battlefield. Each team's fountain has their own dedicated shop situated nearby that is exclusive for their use.

A player can access the shop either by clicking it directly with the mouse cursor, by clicking on their

gold or by pressing the associated hotkey (which defaults to P). A champion must be in proximity of the shop for the summoner to obtain items. On Summoner's Rift, this range does not originate from the shop and only encompasses the fountain instead.

The shop has three main sections - the Highlighted Item, the Inventory, and Item Sets. 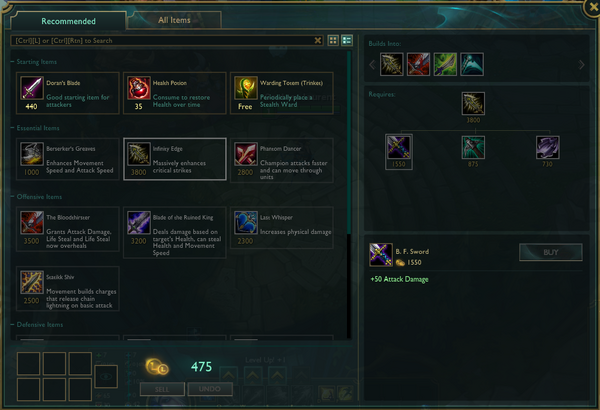 The shop window, as it appears for

The Highlighted Item occupies the right of the screen and displays the currently selected item and any relevant information about it, such as the prerequisite items that are needed to buy it, which items it is a prerequisite of, and the item's attributes, including its champion statistics, named item effects and its

gold cost. Its selection will be preserved between shopping sessions, so it can be used to 'bookmark' an item for later purchase if a summoner does not currently have the needed

The Buy button is also located here, although double- and right-clicking on an item can and often are used as shortcuts.

If the viewed item is a trinket, boot enchantment or an unenchanted jungle item, then the other items that it can be exchanged with will also be shown here.

gold of the player. It also contains the Sell and Undo buttons. Items can only be sold by selecting an item in this inventory, NOT anywhere else in the shop screen - it must be one of these seven icons. As of patch V8.1, closing the item shop within 0.25 seconds of selling an item cancels the sale.

Homeguard enchantment.  - the icon will be greyed out and unusable if these conditions are not met.

An Item Set is a collection of items in the shop. By default, only two sets exist, the Recommended items and All Items, but players can create their own custom item sets in the client to use in game. The view can be toggled between the more detailed list mode (the displayed mode in the page image) or a more condensed grid mode using the pair of button in the top right.

The search bar is an important feature of the Item Set section as it allows rapid parsing of items for quicker and more fluid purchasing. It will recognise not only the names of items, but also their descriptions, any statistics that can be offered, and common nicknames for certain items (for example, typing in 'bt' will result in

The Bloodthirster; typing 'tons of damage' will result in

Upon first being opened, the shop will, by default, display the Recommended tab for the champion the player is using. These are items put forth by Riot as the most useful purchases for their choice of champion over the course of a game. This can be exceptionally useful for newer players who are inexperienced with a champion and can use the recommended items as an indicator of how they are usually played.

The Recommended tab is organized as follows:

All items tab in the shopping screen

As a player gains experience, however, they will likely no longer require the Recommended tab to suggest purchases for them and will instead prefer experimentation of their own. The All Items tab exists for this purpose and lists both all available items and multiple filters that can be applied to parse them.

Items which are not available on the map the current game is taking place on will not appear in the shop. However, not all items shown in the shop, are available to be bought. Champions without the

Smite spell cannot buy jungling items. There are also items that can only be bought by a group of champions, like

The All Items tab is organized as follows:

The only statistics that are not directly covered by the filters are armor penetration and magic penetration, although these are still recognised by the search feature.

Custom Item Sets are usually used by the most experienced players who have a dedicated set of items that they wish to have rapid access to for a given champion. These can be edited in the summoner profile page in the PvP.net client.

Custom sets can have as many categories, items per category and combinations of items as the player wishes. They can also be set up to be usable by all or specific champions and on all or specific Fields of Justice. Custom Item Sets can be accessed using a drop-down arrow that appears next to the Recommended tab when one or more is available.

League of Legends have had numerous different shopkeepers during its history. Most were primarily used for Summoner's Rift while the remaining ones for ARAM, Twisted Treeline, and other game modes.

The Temple of Lily and Lotus uses Little Legend skins as the shopkeep, and part of Summoner's Rift shop model as the background.