"The Eye is blind to fear, to hate, to love - to all things that would sway equilibrium." -

Among the secretive, Ionian warriors known as the Kinkou, Shen serves as their leader, the Eye of Twilight. He longs to remain free from the confusion of emotion, prejudice, and ego, and walks the unseen path of dispassionate judgment between the spirit realm and the physical world. Tasked with enforcing the equilibrium between them, Shen wields blades of steel and arcane energy against any who would threaten it.

Leader of a secret clan of mystic warriors, Shen serves as the Eye of Twilight, entrusted to enforce equilibrium in the world. Longing to remain free from the confusion of emotion, prejudice, or ego, Shen continually struggles, spirit blade in hand, to walk the unseen path of dispassionate judgment.

An enigma to the shadowy realm of the spirits, as well as the mortal territories of man, Shen belongs to neither. Within him exists an uneasy fusion of human soul and arcane power. He is seen by both sides as someone to be feared. He is immovable. He is constant. He answers to nothing but his purpose.

Although his birth within the most revered of Ionian clans marked him as destined to serve, it was his iron will that made Shen the chosen leader of a shadowed order. Wielding his spirit blade – the symbol of his duty, as well his connection to the spirit realm - Shen roams both worlds, unerringly drawn to any place where one side threatens to overwhelm the other.

There are countless legends recounting Shen’s battles across the realms. From his innumerable clashes with the Seven Demon Clan throughout Ionia’s physical and ethereal planes to Shen’s brutal scourging of the loathsome skin devourers from the Black Steppes of the Freljord, the truth is lost among the tales told in his wake.

One of the most fanciful stories recounted by Ionians is of the day Shen suddenly appeared in the central court of Noxus. Standing in the very heart of his enemy’s stronghold, onlookers watched in rapt horror as he appeared to fight a terrible battle against a threat they could not see. To the crowd, Shen seemed to flash in and out of existence, wounds blossoming all over his body from nowhere. Unknown to the Noxians, he singlehandedly defended their entire empire from an incursion by the spirit world.

Though Shen walks a lonely path on both this plane and beyond, he does not always walk alone. Other members of his hidden sect - the mortal

Though he has allies, Shen is solely entrusted with his father’s blade and the responsibility it carries. The Eye of Twilight is forbidden from allowing passion to sway his judgment. While he still unswervingly executes his duty, Shen struggles to contain his anger over the murder of his father at the hands of

Zed, a man he once considered his brother.

With the fate of the world of men, as well as the spirit realm, resting on his shoulders, Shen struggles to maintain the balance between his human emotions and his spiritual focus. How long can one man balance two worlds on the edge of a blade? 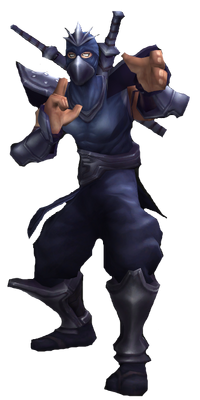 Eye of Twilight sees not the despair of its victims, only the elegance of equilibrium."

There exists an ancient order originating in the Ionian Isles dedicated to the preservation of balance. Order, chaos, light, darkness - all things must exist in perfect harmony, for such is the way of the universe. This order is known as the Kinkou and it employs a triumvirate of shadow warriors to uphold its causes in the world. Shen is one of these shadow warriors, entrusted with the sacred duty of Watching the Stars - exercising judgment untainted by prejudice.

Born to a clan whose members have decorated the ranks of the Kinkou for generations, Shen was trained his entire life to become the Eye of Twilight, and thereupon to dispassionately determine what must be done in the interests of equilibrium. As his final trial to ascend to this position, he was made to attend the Takanu, a ceremony in which his father was tortured before his eyes to test his resolve. Any reaction whatsoever would have resulted in his immediate disqualification, but he never averted his gaze and never blinked, not once. As the Eye of Twilight, Shen must make decisions which would buckle the wills of ordinary men, removing all emotion from the equation. He now works with his fellows

Kennen to enforce the balance of Valoran. This hallowed pursuit has unsurprisingly led the triumvirate to the Fields of Justice.

Ki Strike is an on-hit effect.

Vorpal Blade is a unit-targeted ability with debuff and on-attack effect components.

Feint is a self-targeted buff.

Shadow Dash is a direction-targeted dash.

Stand United is a unit-targeted blink with a buff component.

Retrieved from "https://leagueoflegends.fandom.com/wiki/Shen/History?oldid=2988468"
Community content is available under CC-BY-SA unless otherwise noted.