Gangplank joined the League of Legends, we have been weathering a virtually constant influx of nepotism complaints from organizations in a certain clandestine industry. The exact source of these complaints has been difficult to verify, however, due to their reclusive and mysterious natures. Luckily, our talented public relations department (with the help of a few favors from some friends in the CIA) has managed to pinpoint the exact source of this criticism, and we have decided that it is a demographic that we cannot afford to ignore. For those who haven't yet devised the identity of this group, I am, naturally, talking about: ninjas.

In an effort to keep ninja public opinion on our side, it is with great pleasure that I, on behalf of the Riot Games Design Team, am empowered to introduce:

Shen, the Eye of Twilight. For those of you who have been waiting with bated breath to sport your ninja pride, courage! Just don't let us catch you gaming in an outfit that looks anything like this. 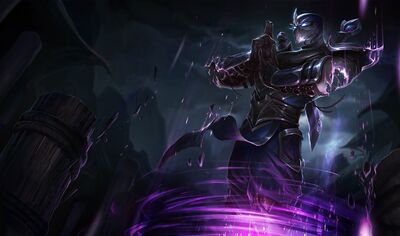 Shen's a bit of an odd duck. He's a ninja who likes to be punched in the face (spoilers: that's not changing) and while bits of his kit are super

generic abilities. He's been suffering from a pretty severe case of old-schoolitis, basically, making him a prime candidate for some champion update TLC. So we've given him some. Alongside brushing up the big guy's model so it's closer to his awesome splash, we've also spent a bunch of time updating some of his abilities. Now Shen's power manifests as a

ki blade he controls with his abilities, for example. Here's his new kit: [3]

After casting an ability, Shen gains a temporary shield. The shield has a relatively long cooldown which is significantly reduced if one of his abilities affects an allied or enemy champion.

spirit blade, empowering his next three basic attacks to deal damage based on a portion of his target's max health. If his

spirit blade collides with an enemy champion on its way to him, Shen deals increased damage and gains greatly increased attack speed. All enemies struck by the returning blade briefly suffer

reduced movement speed when moving away from Shen.

spirit blade creates a protective barrier that allows Shen and his nearby allies to dodge all basic attacks for a few seconds. The ability triggers when there are allied champions in the zone - if there are no allies are in the zone, it waits to start until one gets close enough.

Shen channels as he prepares to teleport to an allied champion anywhere on the map. As he channels, he grants his target a

shield, and once he arrives, he brings his

spirit blade with him.

R are pretty much identical. You'll still be able to pull off your last-second

ults to save a teammate from death, and still surprise your enemies with those fancy-pants

taunt absolutely nothing > spill drink over keyboard, if we're being real.

Then there are Shen's other abilities. We wanted to put into effect a pretty fundamental change to his combat patterns by giving Shen and his opponent more things to do and think about during each game. His old

Q had some neat interactions with other champions, but ultimately it was basically a point-and-click damage ability with some bells and whistles attached.

W - had aged even worse, and was basically a pretty bland shield (because practically no-one built AP on Shen) that just interfered with his otherwise precious energy pool. We quickly identified both abilities as prime candidates for the champion update team's efforts. Basically, we're fine with Shen engaging in extended one-on-one duels, but we want those fights to be a bunch more engaging and skill-based than they were.

So how're his new abilities different? Well, his new

Twilight Assault - completely changes how and when Shen wants to fight. He's purely melee now, obviously, so can't bully or last-hit from

range. Instead, he's all about positioning, maneuvering around his opponent so his

spirit blade through his enemy. His opponent wants that to not happen, obviously, resulting in the two tangoing around their lane for positional advantage. Shen can force the issue by

Shadow Dashing in, landing the taunt, then pulling the

spirit blade through. This gives him a pretty big boost to his damage, and opens up

Spirit's Refuge to parry his opponent's reply. His new

W has serious implications in teamfights, too, giving his entire team the means to dodge incoming basic attacks. Again, this all requires positional smarts, and the ability's cooldown means he'll only really get one shot with it per late-game fight. It's a strong ability, basically, but only when it's used properly. Finally, Shen's new

passive shield is a key part of the big man's repertoire, particularly come late game. Past level 16, his shield literally has no cooldown when he lands his abilities on other champions, meaning smart and dexterous Shen players get to morph into mighty unkillable supertanks.

This week, we sit down with Champion Designer Mark 'GMang' Sassenrath – join us as we chat with him about childhood game design, his work at Riot, and the upcoming 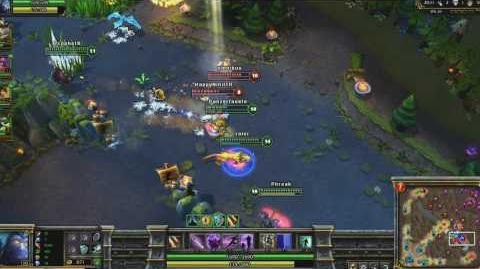 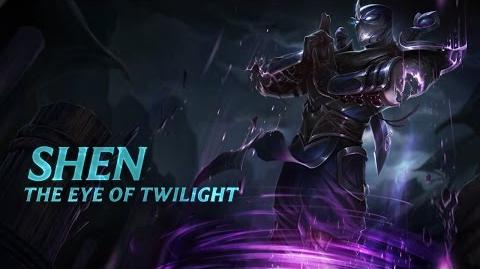 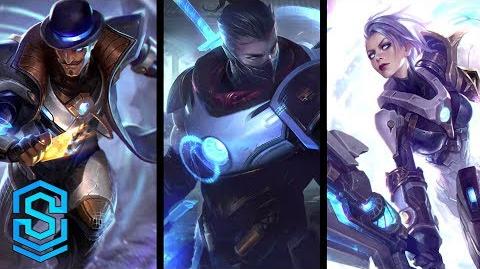 Retrieved from "https://leagueoflegends.fandom.com/wiki/Shen/Development?oldid=2926563"
Community content is available under CC-BY-SA unless otherwise noted.