The Serpentine River is a vast river network located in Ixtal Jungle of the Shuriman Continent. The river starts in the east of the Jungle, directly connecting with the The Mother of Life river of Shurima, and ends with a large river delta, slicing the entire Jungle to North and South. The denizens of the river delta have close ties with surrounding settlements as well as Bilgewater and the Serpent Isles. 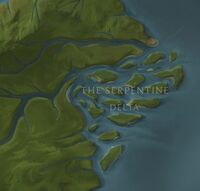 A group of nomadic river folk live on the river, drifting from town to town.

Twisted Fate was banished from this group after he ran from a group of people he had swindled, causing them to retaliate against his fellow river folk instead.[1]

Wharf Rats a terrifying blend of shark and rat commonly found on the docks of Bilgewater. These creatures are larger than dogs and are known to prey upon drunks and lone fishermen on moonless nights. They often travel in packs, and are easily capable of biting a man's leg off.