Serpent Isles, or Blue Flame Isles, is an island archipelago off the southeastern coast of the Valoran mainland. Notably, it contains 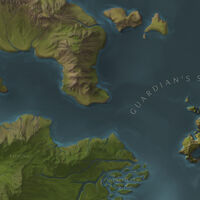 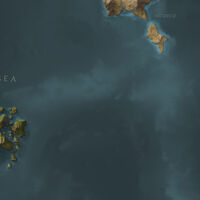 The culture of Serpent Isles is deeply tied to Bilgewater, the island's nation. Bilgewater, over the years, has become an important stop for trade ships traveling near the Serpent Isles. While this increased the nation's wealth and influence on

Valoran, the trade routes also brought piracy, and the island's inhabitants found themselves caught in a frenzy of pillaging. Things have relatively settled down since those days. Many inhabitants now strive to unite under Bilgewater in order to make themselves into a strong and independent society.

While much of Valoran knows the archipelago as the Blue Flame Isles, to the indigenous people of Buhru they have only ever been the Serpent Isles. Buhru's ancient culture is highly respected, reflected, and sometimes imitated in the daily life of Bilgewater—including traditional medicine, and monster hunting techniques.

More recently, the Isles have been under assault from the Shadow Isles, that attacks in the form of "Black Mist" and probably in undead armies. The threat has been successfully fought off by the combined efforts of a Leviathan,

Nautilus  and its own residents, however,

Hecarim  has successfully raided the island at least 2 times, leaving no survivors on the attacked towns.

Other locations part of these archipelago are, Bilgewater, and Isle of Buhru.

The Bilgewater Union (commonly referred to as Bilgewater) is an island nation of the Serpent Isles, which are located in the southeastern coast of Valoran. Over time becoming a vital stop for trade ships traveling near the Serpent Isles. While this increased the nation's wealth and influence over Valoran, it has also made the nation a major refuge for piracy, and the island itself a tempting target for pirate raids. Rum is the nation's major export, which is made in the various pubs and taverns down Fleet Street. Before sailing into the port, onlookers can see the image of a white skull on the large rock behind the city.

On the isle of Buhru, one of the isles of the Bilgewater island chain,[1] battle isn't considered a test of strength but of will.[2] These Isles are the location from which the Religion of Nagakabouros and its

Wildlife diversity is fairly low around Bilgewater; you're most likely to see wharf rats, seagulls, and

Dredge Dredgers are goblin-like creatures that live around the Serpent Isles and the Guardian's Sea. The are sentient and sapient beings able to wear humanoid clothing, use tools, and express themselves. It is unclear if they have one eye or two, since members of their race often wear squids as hats. They have yellow skin and share some visual similarities with Yordles.

Originating from the conquered lands of Noxus, this citrus fruit is the primary source of vitamin C for Bilgewater pirates that prevents scurvy.

Powder Monkeys are simian creatures that originate from a Monkey Idol currently located on the Serpent Isles. The are small of stature with fur that has a gunpowder color and glowing yellow eyes. They often live gather around people or areas where there is a heavy use of gunpowder, hence their names. They are mischievous, but can prove useful in enhancing gunpowder related weapons with unknown magical powers.

Sea Horses are large equine creatures that live around the Serpent Isles. Contrary to their name, they are mostly land based creatures, being used as a mode of transportation by some Bilgewater residence. Their key features are their fin manes, long tails, as well as their scaled-like skin.

In Bilgewater one can come across many astounding creatures brought from the dark and mysterious Guardian's Sea, such as dragon-sharks, sea serpents, giant squid, four-eyed hammerhead sharks, and kraken.

There are also more mundane creatures inhabiting the sea, coastlines and docks such as octopi, hammerhead sharks, devilfish, clams, and ordinary fish.

Fish Folk are sentient and sapient fish people that live around the Serpent Isles. They key physical features resemble that of a cat fish as well as the Demon of Addiction,

Giant Crabs are native to the seas around Bilgewater. One of their key characteristics is their rough outer shell with many spikes as well as their large oval eyes. Domesticated giant crabs are used by Bilgewater merchants to carry heavy goods on their backs.

Scuttler Crabs or Rift Scuttlers live in the fresh waters of Valoran and can be found near the docks of Bilgewater (and in-game, in Summoner's Rift). They are small green-shelled crustaceans with three pairs of legs and one pair of front claws. They sometimes bury themselves into the muck of a river bed to avoid predators and usually flee from danger in any way possible. If corrupted by The Void, a Rift Scuttler turns into a

Shellshockers are turtle-like creatures that live in the shallow waters of the Guardian's Sea. They display some form of sentients and sapience, being able to stand up right and have poseable hands with which they use for rudimentary tools and organic cannons that shoot out magically infused bubbles.