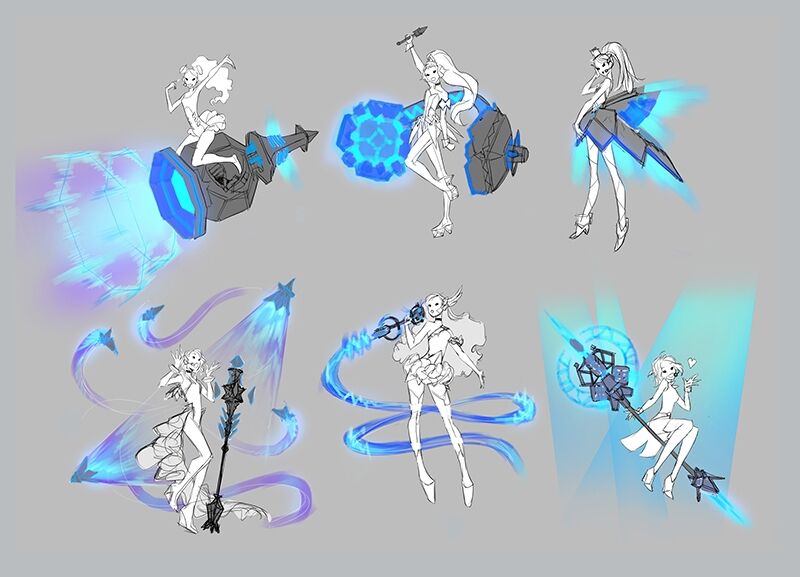 That about covers everything we wanted to talk about today. Sorry we weren’t able to find the new jungler—what a weird experience that was. I'll make sure to keep my wits about me for the roadmap later this year, where we’ll talk about two of the other new champs in development. Tune in next time to hear about a sensational mage and an ultra-heavy tank support, which will round out our goal for releasing one new champ per role each year. 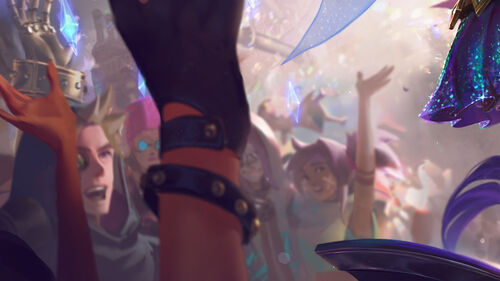 I don’t know about all of you, but I have become a fan of so many champions over the years. Have any of you become so charmed by a champion, that you hang posters on your walls, play their theme on repeat, and lock them in every game you possibly can?

Regardless of your current level of fandom, when Piltover and Zaun’s new rising star finally hits the promenade, she might convert you into an instant mega-fan. I hope you’re all ready to crowd around her and cheer along! 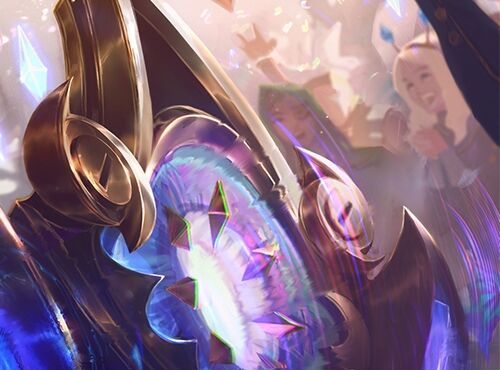 Seraphine’s a one-of-a-kind champ. She’s got social media accounts, takes selfies with her cat, and is collaborating with global pop group K/DA. Except... that’s not the Seraphine we’re here to talk about.

The Seraphine we all watched go from bedroom artist to international pop sensation isn’t exactly the same one you’ll see on the Rift. She’s not “the K/DA” champion—that’s her real-world persona. Seraphine’s a Piltovan pop star who wants to connect with everyone around her. She’s sensitive, tenacious, and supportive. And she wants you to be her biggest fan.

But that doesn’t explain how we got to this Seraphine. How did she become a Runeterran singing sensation? Who is she really? And how in the world do we have a pop star in League?

The term “pop star” probably brings up images of huge cultural icons with backup dancers, lights, and packed stadiums. So how does that fit in Runeterra, a world where people use swords, shields, and the occasional semi-internal-magazine handgun?

“There’s a pretty wide variety of technology available in Runeterra, so we had a few options to explore for Seraphine,” says narrative writer Rayla “Jellbug” Heide. “But the first pitch in my head was that she was a singer from Piltover and Zaun. Zaun in particular is a somber place with dark characters, and we hadn’t really had a chance to explore the creative and positive elements of that region, which I thought could be really exciting.”

Piltover and Zaun are the hub of technological advancement in Runeterra. We’ve met the inventors, scientists, and... mad scientists of these twin cities. But what about the artists? The musicians? We know who fuels Piltover and Zaun’s inquisitive minds, but who nourishes their spirits? 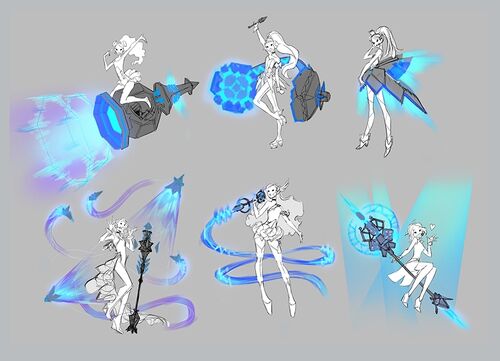 “It was logical that Seraphine come from Piltover and Zaun because the level of technology makes them feel semi-related to the real world,” says concept artist Anna “Newmilky” Nikonova. “Pop stars feel more like a modern phenomenon to me. I kept thinking of her taking a selfie and it was really hard to imagine how she’d fit into Runeterra organically. I needed to make sure it felt like Seraphine—and her music—was born in Piltover and Zaun; that it evolved there, and she became their pop star. So I needed to understand the type of technology she’d be able to use to make sure it didn’t feel too real-world.”

Hextech has been a staple in Piltover and Zaun for a while. It powers the heart of the region’s inventions (and ol’ scissor legs’

Camille's heart), and it enables some level of modernity. It’s how Seraphine uses her mic, how she performs for the masses. It’s also how the team ensured she had a unique silhouette. 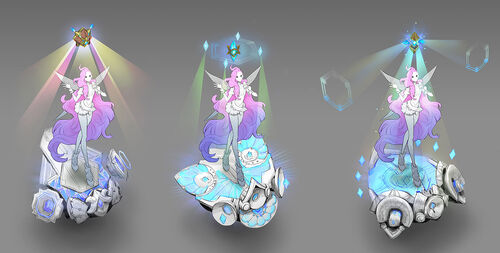 “At first Seraphine just flew around with her mic and some visual effects. But we encountered a problem we run into a lot, which is making sure new champs look as physically different as possible from other champs,” Newmilky explains. “Then we came up with the idea of the platform, which was really cool. The animators could make her dance and do fun cast animations because she doesn’t have to keep her feet on the ground.”

Venue: Check. Stage prep: Check. Technology: Check. Now it was time to add some lyrics to her story.

“I really wanted Seraphine to be deeply empathetic,” shares Jellbug. “From the beginning, we were trying to figure out a way for her to be unique in the League roster and also as a performer. Pop stars tend to be larger-than-life and unapproachable. But we didn’t want that for Seraphine. So we decided to amplify her empathy and make it so she could feel other people’s emotions in the form of music.”

Not only can Seraphine hear the emotions of the people around her, she can hear them from another source as well. 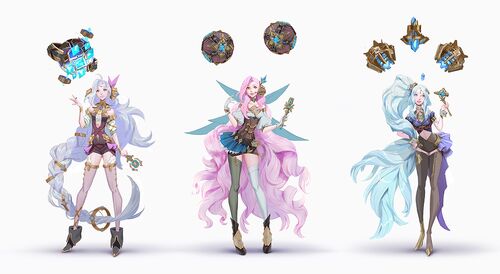 “Most Piltovans are unaware, but hextech relies on crystals that have brackern souls (read:

Skarner's family) within them,” says narrative writer Daniel “Istogaiden” Couts. “There are some heavy implications to this, but Seraphine's the first person who can hear the brackern in these crystals. Song is important to the brackern, and that song continues from their crystals. She connects with one in particular, losing herself in its song and, in the process, learning to handle her power.”

Seraphine spent her life surrounded by a constant barrage of songs from both the citizens of Piltover and Zaun, and from the souls trapped around her. She may not be able to save them, but that doesn’t mean she doesn’t care for them—or for her fellow citizens.

She wants to connect with others and elevate them so deeply, so she learns to do it the only way she knows how: music. She takes the deluge of song—both tormented and joyous—and turns it into something meaningful, something beautiful, something that makes sense to her, and gives it back to everyone around her. 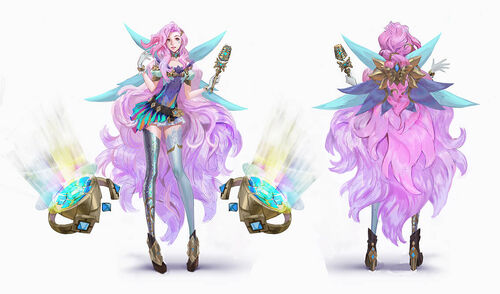 “There’s a magical moment when you’re in a crowd at a concert and you lock eyes with the singer... It feels so rapturous, like they’re singing just to you. It’s something I thought about a lot because Serapine literally does that,” says Istogaiden. “She can hear your soul’s song and sing it back to you in a way that other artists can’t. It’s something really beautiful.”

All of this talk about emotions and music is good in theory, but let’s not forget that League’s a game. She may be bringing people together in Runeterra, but how can the power of music unite your Challenjour teammates on the Rift?

“I was working on Seraphine at a time where I thought everyone hated each other when they played League,” recalls senior games designer Jeevun “Jag” Sidhu. “It seemed like people resented that League was a team game. I’d see posts on social media from players who hated having to play with their teammates. I really wanted Seraphine’s design to almost try to tackle that problem. I really wanted players who played Seraphine, or played with Seraphine, to remember that team games are fun and that everyone likes playing with friends.” 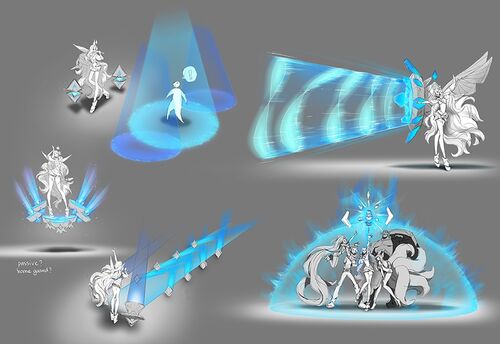 Seraphine’s kit encourages players to group up around Seraphine and play together. Her passive modifies her basic spells, providing increased damage, unique buffs, and the occasional heal. And it only gets better as more people join her entourage.

“I wanted Seraphine’s abilities to feel like a way she could share the stage, and her W, Surround Sound, does that perfectly. It’s an AoE movement speed buff and shield, but when paired with her passive it changes entirely,” Jag explains. “If Seraphine already has a shield on her, then she heals herself and her allies... and they’ll heal themselves and each other. So that means the more people you have in the spell, the more benefit everyone gets.”

But that’s not the only way Seraphine encourages her teammates. Her ultimate, Encore, gives her the chance to hype up her allies and grants her a moment to be performative. 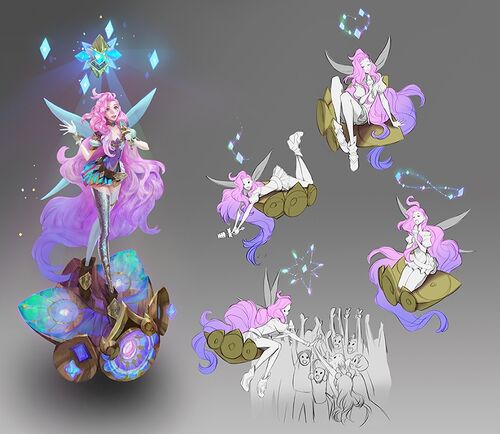 Orianna ult—and since Seraphine is a pop star, hers needed to be even more of a big moment,” says Jag. “She takes this big breath, sings out a really loud high note, and shoots out an AoE charm. Enemies take damage and walk towards her, but the cool thing about this spell is that it extends any time it hits a champion—even allies.”

Lee Sin dash, only to realize their team can’t catch up. But that won’t be the case with Seraphine on your team. She lives for the moment when she takes center stage, hits her high note, and sends her ult through that “too deep” teammate to land the perfect five-person charm. It’s the ultimate moment of cooperation and teamwork. It’s Seraphine’s perfect show. 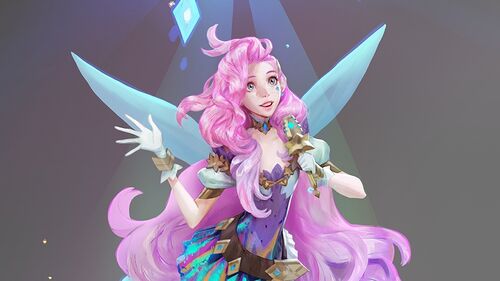 With her supportive gameplay locked, all that was left was to give this pop star some tunes.

“I previously worked on the

True Damage Ekko skin, so I was pretty familiar with musical champions, but that didn’t mean Seraphine was any less challenging,” shares sound designer Jayvon “Riot Jirsan” Rymer. “Because she’s a singer, I wanted the music element to come from her voice. The Riot Voices team, which handles VO recording, got me some vocal riffs and melodies from Seraphine’s voice actor to use in her sound effects.”

Riot Jirsan went full producer on Seraphine's raw vocal clips, using a variety of plugins to edit the recordings into the base building blocks of her sound effects. Then, to give players even more incentive to group around Seraphine, Riot Jirsan created a music system so players know when they’re in range to get maximum benefits. 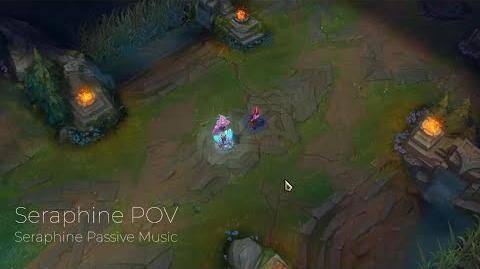 Seraphine sings to the soul, and she only wants one thing (and it’s adorable):

“Seraphine just wants everyone to know that she loves them,” Newmilky smiles.

“Weird,” Istogaiden adds. “I was thinking that, too.” 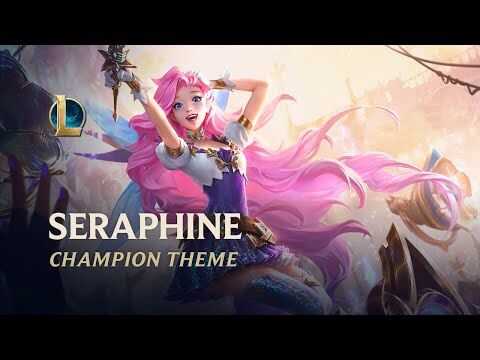 KDA ALL OUT Seraphine Indie - All The Things She Said

KDA ALL OUT Seraphine Indie - POPSTARS

KDA ALL OUT Seraphine Indie - Made me this way 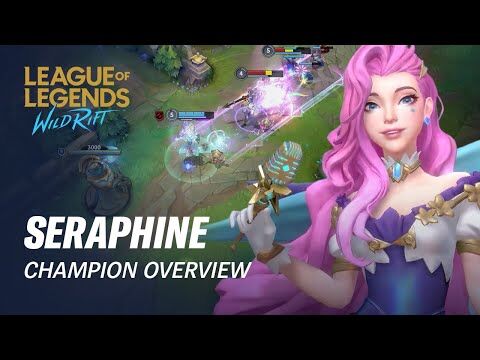 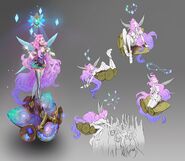 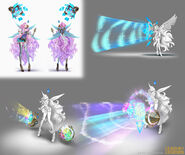 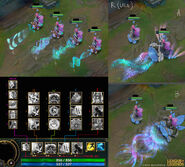 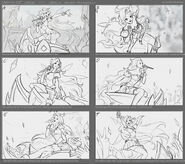 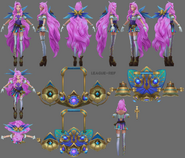 K/DA ALL OUT Seraphine Model 7

K/DA ALL OUT Seraphine Model 8

K/DA ALL OUT Seraphine Model 9 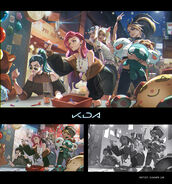 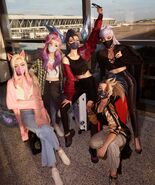 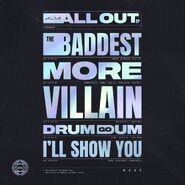 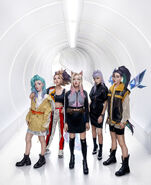 K/DA ALL OUT Seraphine Indie Twitter Promotional Art
Due to the large amount of promotional art posted on her twitter page,

K/DA ALL OUT Seraphine Indie specific promotional art is separated to its own gallery.

K/DA ALL OUT Seraphine Indie

K/DA ALL OUT Seraphine Superstar

K/DA ALL OUT (Legends of Runeterra)
Add a photo to this gallery
Main article: Ward skins

K/DA
Add a photo to this gallery
Main article: Emotes

Selfies (Legends of Runeterra)
Add a photo to this gallery

Retrieved from "https://leagueoflegends.fandom.com/wiki/Seraphine/Development?oldid=3279787"
Community content is available under CC-BY-SA unless otherwise noted.