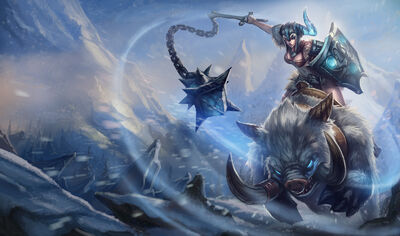 As some of our more discerning lore-hounds may have anticipated,

Sejuani, the Winter's Wrath, is

charging in as our next upcoming champion. We wanted to take a moment to talk to you about her gameplay, and what you can expect to see.

Hailing from the Freljord, Sejuani combines raw, physical might with the chilling ice of her homeland. After slowing enemies with her

Frost passive on auto-attacks, she can activate her

Permafrost ability to drastically increase the slow and inflict damage. This allows her to continuously disrupt enemy movements and create a threatening presence - a necessity of any primary tank.

Frost, while the latter flings a giant ice shard from her flail, stunning anything it hits by encasing it in ice. Enemies near that target get stunned for a shorter duration. This makes accurate skillshots important, as Sejuani needs move into the right position to maximize the stun duration on her intended target. If used correctly, this ability can change the outcome of a teamfight. If used on a sub-optimal target, however, it will be partially wasted on a tank or lower-value target.

This being our first mounted champion, we're happy to release not only an epic barbarian woman on a giant boar, but also a tank who can use continuous soft disruption with bursts of big,

Frost to enemies. Sejuani stops upon colliding with an enemy champion.

Sejuani summons an arctic storm around her which deals magic damage to nearby enemies every second. Damage is increased against enemies affected by

Frost on nearby enemies to Permafrost, dealing magic damage and increasing the movement speed

stunning the first enemy champion hit. Nearby enemies are

stunned for a shorter duration. All targets take magic damage and are affected by 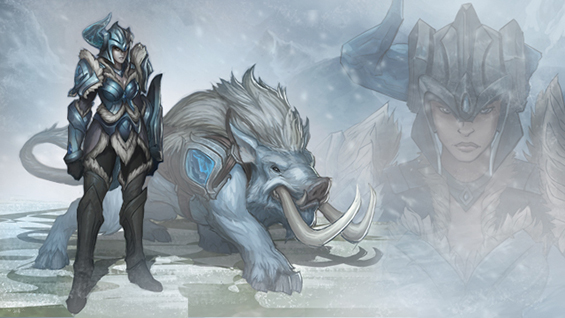 Sejuani girds herself for battle, eagerly anticipating the inevitable conflict brewing in the Freljord. There are a number of changes coming for Sejuani, including a visual upgrade, new gameplay mechanics, and a deeper exploration of her lore.

Bristle, this visual rework clearly conveys the core of our concept for the champion. She's powerful, capable of conquering the Freljord, and leading the

If we were going to make Sejuani look imposing, we needed make sure her fierce steed, Bristle, could keep up. Here we added bulk and power to his model, and updated the animation on

Arctic Assault to show him tossing scattered foes into the air.

Karma relaunches, those of you who already unlocked Sejuani will get a free skin based on

In order to deliver on the promise of a powerful barbarian, we've added enhanced utility to her skills, allowing her to go head-on as a massive, tanky initiator. With a powerful armor-generating

slow to go along with a tweaked version of

Glacial Prison, the Winter's Wrath is now even angrier.

movement-slowing effects on Sejuani. If Sejuani already has Frost Armor, its duration increases.

knocking enemies into the air and dealing magic damage. The charge ends after

knocking an enemy champion into the air.

Flail of the Northern Winds

Sejuani's next basic attack deals bonus magic damage to the target and enemies near it. She then begins to swing her flail, dealing magic damage to nearby enemies over time. If this ability is

Sejuani throws a frost-forged bola in a line. If the bola hits an enemy champion, it shatters,

stunning the target and nearby enemies. If the bola reaches its maximum range, it shatters and

Sejuani's still a riding CC machine out of the jungle. In the early game,

Flail of the Northern Winds. The combination of

Arctic Assault from the brush can quickly lock down an enemy for a kill. Once she has a point in

Flail of the Northern Winds, then using a combination of her other abilities to escape enemy ganks. Her full arsenal of crowd-control makes chasing or being chased a frightening prospect for the opposing team. Her

passive armor allows her to wade into the front line of skirmishes, secure in the knowledge that her teammates can pick targets off at leisure.

One of the most imposing initiators in League of Legends, Sejuani can use

Glacial Prison to force a fight near an objective, or hunt down retreating foes with

Arctic Assault. As a strong source of magic damage, Sejuani makes a great tank to complement an AD heavy lineup. Her

charge can break up a channeled ultimate or wreak havoc on the enemy team's positioning. All the while she'll absorb huge damage and protect the squishier members of her team by forcing opponents to engage on her with her impressive crowd-control.

Sejuani's becoming a true barbarian warleader. Once the Winter's Wrath charges into battle,

frosty strikes from her warband leave enemies vulnerable to

Fury of the North

knocking up enemies in her path. The charge stops on the first enemy champion or large monster hit.

Sejuani swings her mace in front of her, then lashes out in a line. Both swings deal damage and apply

freezes the first champion hit based on distance traveled. Long-range bolas leave behind an ice storm that

slows enemies, erupting after a brief delay to damage and massively

slow enemies except the original target.

Retrieved from "https://leagueoflegends.fandom.com/wiki/Sejuani/Development?oldid=3063763"
Community content is available under CC-BY-SA unless otherwise noted.