The Season One Championship was a competitive event to bring Season One of League of Legends to a close. It was an event hosted in at Dreamhack in Jönköping, Sweden.

You’ve patiently waited for this day since we first announced Season One during the summer of 2010.

Throughout the course of Season One our community has grown tremendously, and there have been many new additions to the game: draft mode, ranked games, ladders, Co-op vs. AI, and 18 new champions released to date.

We’ve also seen our competitive scene explode with the selection of League of Legends in hallowed eSports tournaments such the World Cyber Games, the Electronic Sports League Major Series, and the Intel Extreme Master Season 5 Finals. In addition to these selections, we’ve launched the Season One Circuit which have certified nearly 50 professional tournaments, supported dozens of community run tournaments, witnessed weekly cups featuring over 2000 competitors, and watched weekend tournament streams that have supported nearly 150,000 unique viewers.

It’s time to put Season One to rest… but not before we determine the best League of Legends team in the world and award over $100,000 in cash prizes! To do this, we’ll conclude the Season One Circuit on Monday, May 2nd and shortly afterwards determine the top teams from each region. After that we’ll fly the top eight teams from around the globe to Dreamhack Summer in Jönköping, Sweden, where they will compete over the course of 3 days – from June 18th to June 20th – until only one team remains. The Season One Championship will mark the official end to Season One and will be followed by an off season.

Participants: 8 of the top League of Legends teams from around the world. (3 European, 3 North American, 2 South East Asia teams)

For our summoners that haven’t heard of Dreamhack, it is the world’s largest digital festival and holds the official record as the world’s largest LAN party in the Guinness Book of Records. DreamHack Summer is a four-day, 24/7, all-ages event for gamers, but with activities for everyone. DreamHack is also a recognized eSports destination, with an extensive schedule of tournaments for gamers of all skill levels – from casual to professional – and noteworthy cash prizes for winners.

We also want to make sure that we bring every moment of the tournament directly to our players and fans. We’re going to make sure that the live stream viewing experience is amazing for every exhilarating match. Over 140,000 viewers streamed the Intel Extreme Masters exhibition matches, and we can’t wait to see how many people tune in for the Championship! So spread the word!

Season 1 will conclude with a $100,000 Grand Finals featuring the best teams from all over the world. Teams will qualify for the grand finals by competing in a circuit of local, online, and global events. At the end of each event, top placing teams will not only be rewarded with cash and prizes, but will also earn ranking points that establish them as the best in their region. Many summoners will thrive, but only one team will earn the title of Season 1 Champion. The Grand Finals are scheduled from June 18 to June 21, 2011 at Dreamhack in Jönköping, Sweden.[2]

The season one regional qualifiers for Dreamhack took place on the weekend of May 27–28, 2011. The 8 top placed teams in each of the North America and Europe divisions competed for a total of 3 seats in each division at the tournament. Combined with 2 seats from Asia this deiced the 8 teams to compete at Dreamhack. Details of the Regional Qualifiers tournament can be found here. The Friday after, On July 3 the season 1 finalists where announced. The qualifier stream had a total of 300,000 unique viewers with a peak of 69,000 people watching at one time.

Teams qualified to compete at Dreamhack 2011:

Path to the Grand Finals

The qualifying matches decided who went to semi-finals. First ranked of a group goes directly, while 2nd and 3rd placed had to dispute a relegation match. The 4th ranked team of a group was eliminated. Ties were broken by using the number of kills combined from every match.

Those who claimed victory in the relegation round are given in a spot in the upper bracket of the semi-finals to compete in a best of three to move on to the world finals.

Those defeated in the relegation round face off to claim the number 5 spot while those defeated in semi-final matches are sent to the lower bracket for a second chance to grab a place in the grand finals to face the winning team of the upper bracket.

The winners of these two matches in a best of three progress to the grand finals to rise victorious in League of Legends Season One Championship.

After many battles the two teams that were still standing were Fnatic and Against All Authority. Managing to not fall once in the upper bracket, Fnatic appeared very strong. And appearing for a rematch, Against All Authority came back to face Fnatic again after losing to them in the Upper Bracket Final Match by defeating TSM 2-0 in the lower bracket final. Yet, as both teams proved very strong in the tournament, Fnatic emerged victorious with a 2-1 score and became the Season One Champions. 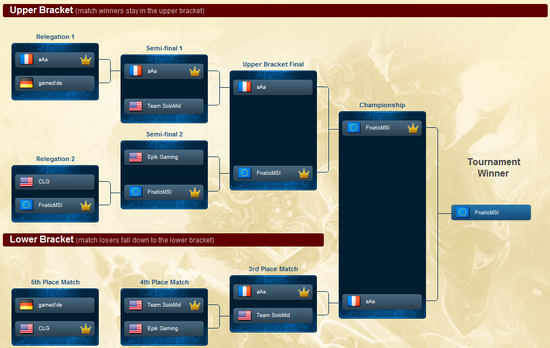 Aggregated champion statistics from the championship:

End of Season One Championship

This competition marks the closing of a historic chapter in League of Legends; the end of our very first Season of competition! We here at Riot Games feel privileged to be able to share this event with so many talented gamers who helped make League of Legends such a phenomenal success over the course of the past years. We look forward to seeing even more of you as we head into the beginning of Pre-Season Two!

We would like to thank everyone who took the time to tune in and share this momentous occasion with us and send our congratulations to Team FnaticMSI and all the teams that shared in the $100,000 prize purse! Thanks for making the Season One Championship such a great success, and thank all of you for playing League of Legends!

Retrieved from "https://leagueoflegends.fandom.com/wiki/Season_One_Championship?oldid=2961352"
Community content is available under CC-BY-SA unless otherwise noted.