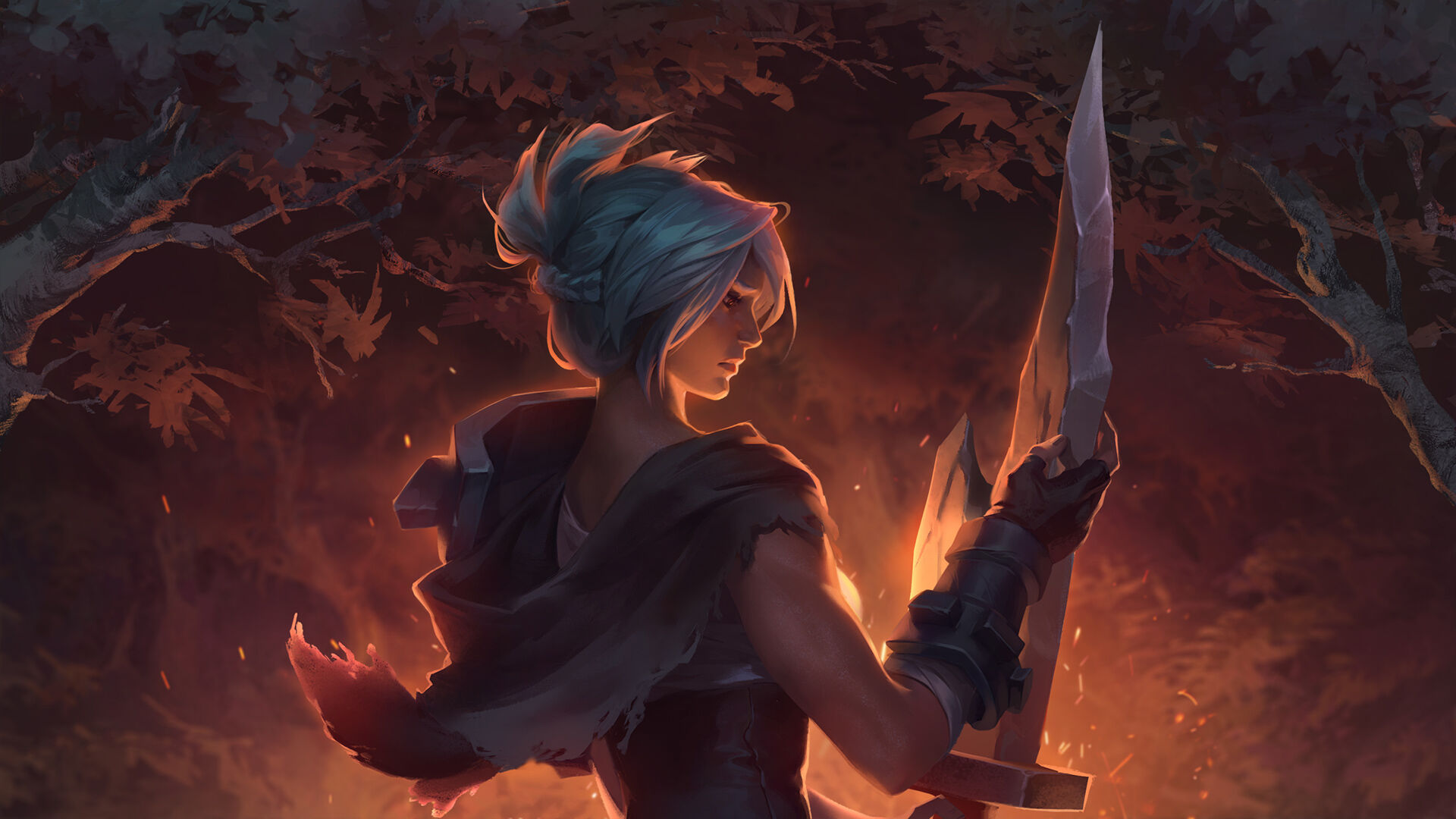 “How came you to Ionia, friend?”

“How came you to

Muramaat tried to keep her voice light. She had never felt uncomfortable sharing a campfire with other travelers along the road to the markets before. This, however, marked her first time sitting across the flames from a

Noxian, one with an enormous

weapon sheathed across her back.

How many Ionian lives has that blade claimed? she wondered.

The white-haired woman glanced at her “father” before swallowing a mouthful of charred peppers and rice, then cast her eyes down at her plate. “I was born in

Noxus,” she said, her accent thick but her tonality nearly flawless. “I have not been back since the war, and I do not plan to return.”

The Noxian’s father, Asa Konte, smiled and placed his hand on her shoulder. “This is her home now,” he said with finality.

Muramaat had invited Asa to make camp with her before she had spotted the Noxian asleep in the back of his cart. He had introduced her as his daughter, Riven, in this same tone, with his chin jutting forward in preemptive defense. Muramaat hadn’t pushed back against the strange old man’s declaration then, but that didn’t mean his “daughter” was beyond scrutiny.

“You have not answered my question,” Muramaat pressed, the chimes of her mender’s necklace clinking together as she poured herself a cup of tea. “What brought you to our shores, Riven?”

Riven tightly gripped her plate, tension rippling through her shoulders. “I fought in the war.”

A simple statement, laden with sorrow. Curious, to hear regret from a Noxian.

“Why did you stay?” Muramaat asked. “Why would anyone stay in a place where they and their people have caused so much pain, so much destruction?”

The plate had broken in half in Riven’s white-knuckled grip, her charred peppers and rice falling to the ground. With a gasp, she dropped the plate shards before bowing ruefully. “My deepest apologies,” she mumbled as she rose. “I will pay for this plate, and then we will leave you to your evening. I didn’t mean to intrude—”

But Muramaat wasn’t listening. Instead, she cradled the broken plate in her hands and held the shards to her ear, humming softly. Slowly, she adjusted her pitch, calling to the spirit within the clay.

The back of her skull tingled when she hit the right tone, as the spirit reverberated with her hum. Holding the note, Muramaat lifted her necklace and flicked its chimes until she found the one that joined her and the spirit in song.

She stared at the chime in the firelight—each one had been inscribed with a symbol that identified how to mend a resonant spirit. This symbol was for smoke, a single line with a curve that became more pronounced toward the end. Muramaat lifted the shards above the fire to bathe them in the smoke. It took only moments before they knitted back together, with only a few coal-colored seams and ridges to show that the plate had ever been broken.

“I’m a mender,” she said as she held the pottery out to a wide-eyed Riven. “No need to replace anything.”

Riven took the plate and examined it. “How does it work?” she asked, running a finger down a thick black seam.

“Everything has a spirit, and every spirit wants to be whole. I ask them what they need to mend, and give it to them.”

“Scars are a sign of healing. That plate will never be seamless again, but it is whole. And it is strong. I’d even say it is more beautiful like this.”

Riven considered the plate in silence.

“I am still here,” she said after a moment, “because I have caused so much pain and so much destruction. I stay to atone.”

Muramaat nodded somberly. Clearly Riven’s scars, though invisible, ran deep. Perhaps this Noxian was different from the others.

But then Muramaat’s eyes fell to the hilt of Riven’s massive weapon. A tool for cutting, not mending.

How different can she really be?

Muramaat woke bleary-eyed to a loud thump against the side of her caravan. Bandits. Riven had insisted on keeping watch through the night, Muramaat remembered as she grabbed her heaviest kettle. But the mender was experienced in dealing with robbers and could always hold her own in a fight.

When she opened her door, however, she saw that Riven would not need her help after all.

One of the intruders lay crumpled at the foot of the caravan. By the fire stood Riven, surrounded by three hulking bandits. She held the enormous hilt, and Muramaat was surprised to see only a broken blade attached to the end. Yet the weapon was still formidable. It seemed to pulse in Riven’s hands as she waited for the others to advance.

Muramaat’s stomach turned to see that blade, not relishing the sight of a Noxian spilling more Ionian blood... but still she watched.

The bandits rushed at Riven, yelling incoherently, but she took a single step forward and repulsed them with a burst of energy from her blade. They dropped their weapons, then scrambled to find them in the dark. Riven could have cut them all down, Muramaat realized, but she didn’t. Instead, she raised her sword, which began to glow an eerie green. The magic from the weapon blasted outward and repelled one of the bandits as soon as it touched him. He fell to the ground in a catatonic daze.

By this point, the others were on their feet, weapons in hand. Riven brought her arm back, and glowing pieces of metal raced toward the Noxian from the cart. The shards formed around the blade, making it look almost whole—though there were still gaps between the pieces. The bandits rushed her again.

Or so they tried. Riven whipped the blade in front of her and blew them back against the caravan with a sudden gust of wind, knocking them all unconscious.

Muramaat stepped gingerly over the defeated bandits. “What will you do with them?” she asked Riven, who had barely broken a sweat.

Riven shrugged, letting the shards of her sword drop to the ground. “I’ll just tie them to a tree until morning.”

Muramaat stared at the remnant of the blade. It didn’t seem as threatening anymore, now that she had seen how Riven wielded it. “Could I see your weapon?”

Riven frowned and took a step back. “Why?”

“What are you doing?” Riven asked in alarm, just as Muramaat found the right pitch—

—a pair of eyes, searching—

Muramaat didn’t realize she had fallen until she felt Riven shake her. “Are you all right?”

“Someone,” Muramaat whispered, her throat dry, “is searching for this blade. For you.”

Riven blanched, but her eyes revealed nothing of her thoughts. “What did you do, Muramaat?” she asked in a low whisper.

“I was wrong to question you. I wanted to offer my apologies by mending your sword.”

“No.” The intensity of the word took Muramaat by surprise. “If you truly want to thank me, you will never fix this blade.” Riven chuckled, a bitter sound. “The one thing I would want you to fix, you can’t. But... thank you. For the offer.”

She sighed, exhausted, and collected up the shards of her sword.

“You should go back to sleep if you want to get to the marketplace early tomorrow.”

Muramaat nodded and slowly made her way to her caravan. When she looked back, Riven was at the fire, sitting and watching the night.

Not for the first time, Muramaat wished she knew how to mend people.

Lore and Events
Retrieved from "https://leagueoflegends.fandom.com/wiki/Seams_and_Scars?oldid=3151033"
Community content is available under CC-BY-SA unless otherwise noted.