Unique – Trinket: Consume a charge to place a visible

Effigy at the target location, which reveals the surrounding area. The effigy visually appears exactly as

Fiddlesticks does to enemies while idle. Enemy

champions that approach an effigy while having

sight of it will activate it, causing the effigy to fake a random action, after which the effigy will deal 1 damage to itself (115 − 30 (based on level) seconds recharge time; 2 charges; 625 range).

Limited to 1 Trinket item. Only available to

Scarecrow Effigy is a basic trinket item in

League of Legends for 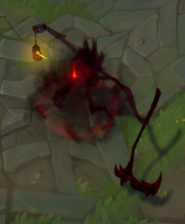 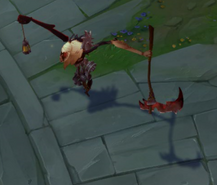