slows affected units by 30% for 1 second.

Rylai's Crystal Scepter is a legendary item in 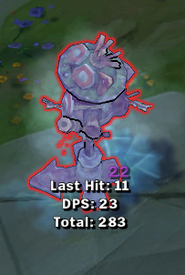