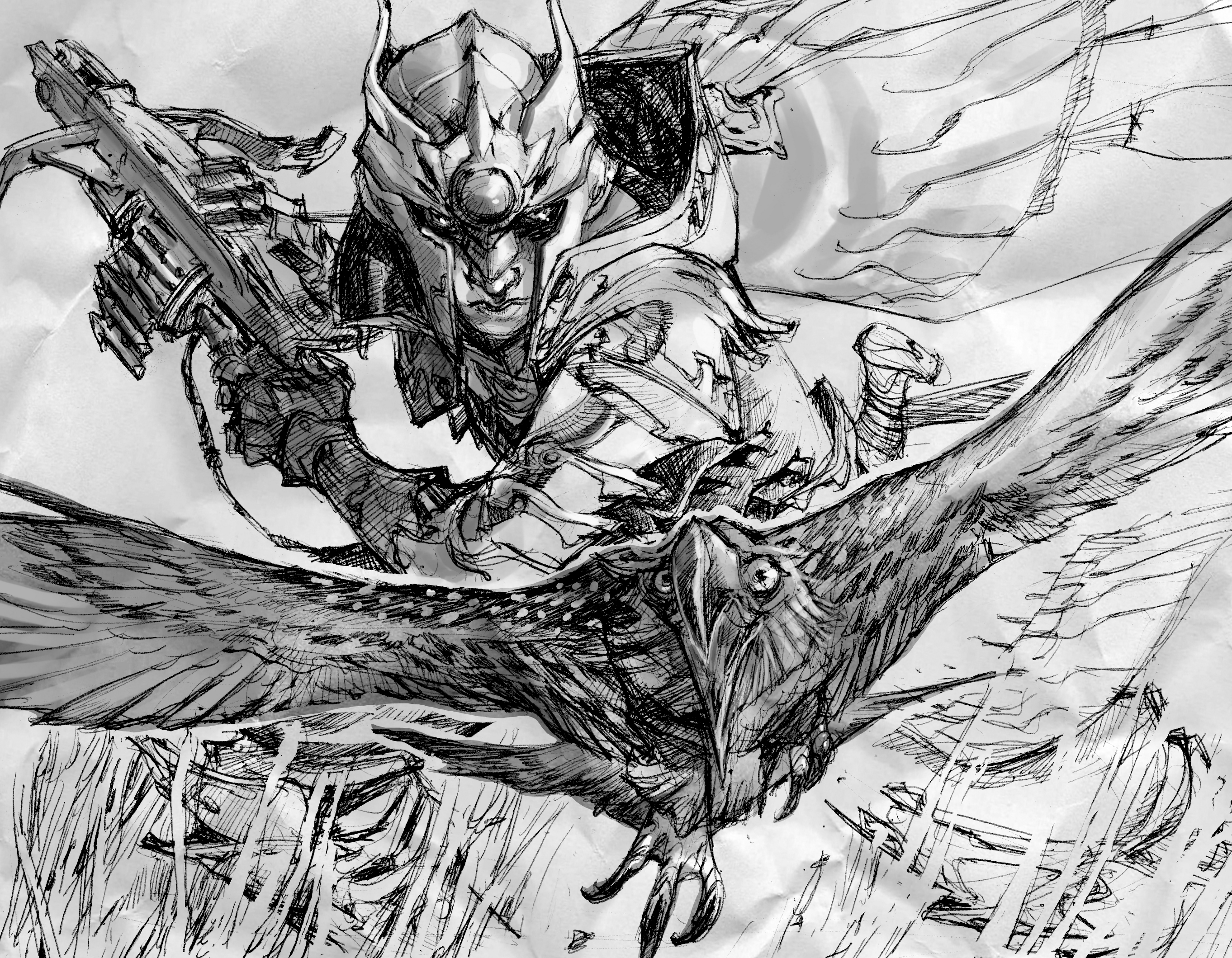 The Demacian wilds are no place for thieving Noxians, but that's who Quinn just found.

Quinn waited for the Noxians to light a fire in the forest clearing and drink two wineskins. Drunk soldiers were easy to predict. She wanted them drunk enough to be stupid, but not reckless. Mistakes got you killed in the wilderness, and these men had just made two big ones. Lighting a fire told her they were overconfident, the wine that they were sure no one was in pursuit.

Rule One: Always assume someone's after you.

She eased herself through the mud on her belly, using her elbows to pull herself toward a hollowed out, rotten log at the edge of the clearing. The rain had turned the forest into a quagmire, and she'd spend the next few hours picking bugs and worms from her clothes.

Careful not to look directly at the campfire and lose her night sight, she counted five men - one less than she expected. Where was the sixth man? Quinn started to ease herself upright, but froze as the hair stood up on the back of her neck, a warning from above.

A shape moved from behind a tree in the darkness. A warrior. Armored in boiled black leather. Moving with skill. The man paused, scanning the darkness, his hand never leaving the wire-wound hilt of his sword.

Had he seen her? She didn't think so.

"Hey, Vurdin", called one of the men seated around the fire. "Better hurry if you want any of this wine. Olmedo's drinking it all!"

The man cursed, and Quinn smiled at his obvious frustration.

"Quiet", he hissed. "I think they heard you back in bloody Noxus."

"Ach, there's no one out here, Vurdin. The Demacians are probably too busy buckling on their armor and giving it a polish to bother with coming after us. Come on, take a drink!"

The man sighed and turned back to the fire with a weary shrug. Quinn let out a slow breath. That one had some talent, but he too believed they were alone in the wilderness.

Rule Four: Don't let stupid people drag you down to their level.

Quinn smiled and glanced up, seeing the smudge of night-blue darkness of her eagle companion against the rainclouds.

Valor dipped his wings, and Quinn nodded, their wordless communication refined over many years together. She circled her right fist, then raised three fingers, knowing Valor could see her perfectly and would understand.

Rule Five: When it's time to act, do it decisively.

Quinn knew they should just take these men out quietly and without fuss, but the affront of Noxians this deep in Demacia was galling. She wanted these men to know exactly who had caught them and that Demacia was not some primitive tribal culture to be crushed by Noxian ambition. The decision made, she pushed herself to her feet and strode into the campsite as if her being there was the most natural thing in the world. She stood at the edge of the firelight, her hood raised and her oiled stormcloak drawn tightly around her.

"Give me what you stole and no one has to die tonight", said Quinn, nodding toward a leather satchel stitched with the winged sword symbol of Demacia.

The Noxians scrambled upright, blinking as they scanned the edge of the forest. They fumbled to draw their swords and Quinn almost laughed at their surprised ineptitude. The one who'd almost walked right over her hid his shock well, but relaxed as he realized she was alone.

"You're a long way from home, girl", he said, raising his sword.

He frowned, put on the back foot by her using his name. Quinn saw his mind working as he tried to figure out how much more she knew. She kept her cloak pulled tight as the men spread out, surrounding her.

"Give me the satchel", said Quinn, a note of boredom in her voice.

It was the last thing he said.

Quinn swept her cloak back over her shoulder and lifted her left arm. A black shafted

bolt from her repeater crossbow buried itself in Vurdin's eye, and he fell without a sound. A second bolt tore into the chest of the man to his left. The remaining four came at her in a rush.

A screeching cry split the night as Valor swept down like a lightning bolt from a clear sky. His wings boomed as he spread them wide and swung around in a scything arc. Hooked

claws tore the face from one Noxian, and the eagle's slashing beak clove the skull of the soldier next to him. The third Noxian managed to raise his weapon, but Valor sank his claws into his shoulders and bore him to the ground. The eagle's beak slashed down and the man's struggles ceased instantly.

The last Noxian turned and sprinted for the trees.

Rule Six: If you have to fight, kill quickly.

Quinn knelt and loosed a pair of bolts from her crossbow. They hammered into the Noxian's back and burst from his chest. He managed to reach the edge of the trees before pitching forward and lying still. Quinn remained motionless, listening to the sounds of the wilderness, making sure there were no other enemies nearby. The only sounds she heard were those she'd expect to hear in a forest at night.

She stood, and Valor flew over to her, the satchel of military dispatches the Noxians had stolen held in his claws. He dropped it and she caught it with her free hand, looping it over her shoulder in one smooth motion. Valor perched on her arm, his body rippling with the thrill of the hunt. His claws and beak were red with blood. The eagle's head cocked to the side, and his gold-flecked eyes glittered with amusement. She grinned, her bond with the bird so strong she already understood his thoughts.

"I was wondering that too", said Quinn. "How did these Noxians get this far into Demacia?"

The eagle gave a shrill screech, and she nodded in agreement.

Rule Seven: Trust you can rely on your partner.

Lore and Events
Retrieved from "https://leagueoflegends.fandom.com/wiki/Rules_of_Survival?oldid=3088691"
Community content is available under CC-BY-SA unless otherwise noted.