League of Legends Wiki
Register
Don't have an account?
Sign In
Advertisement
in: Lore of Ixtal, Lore of Piltover, Lore of Shurima,
and 6 more 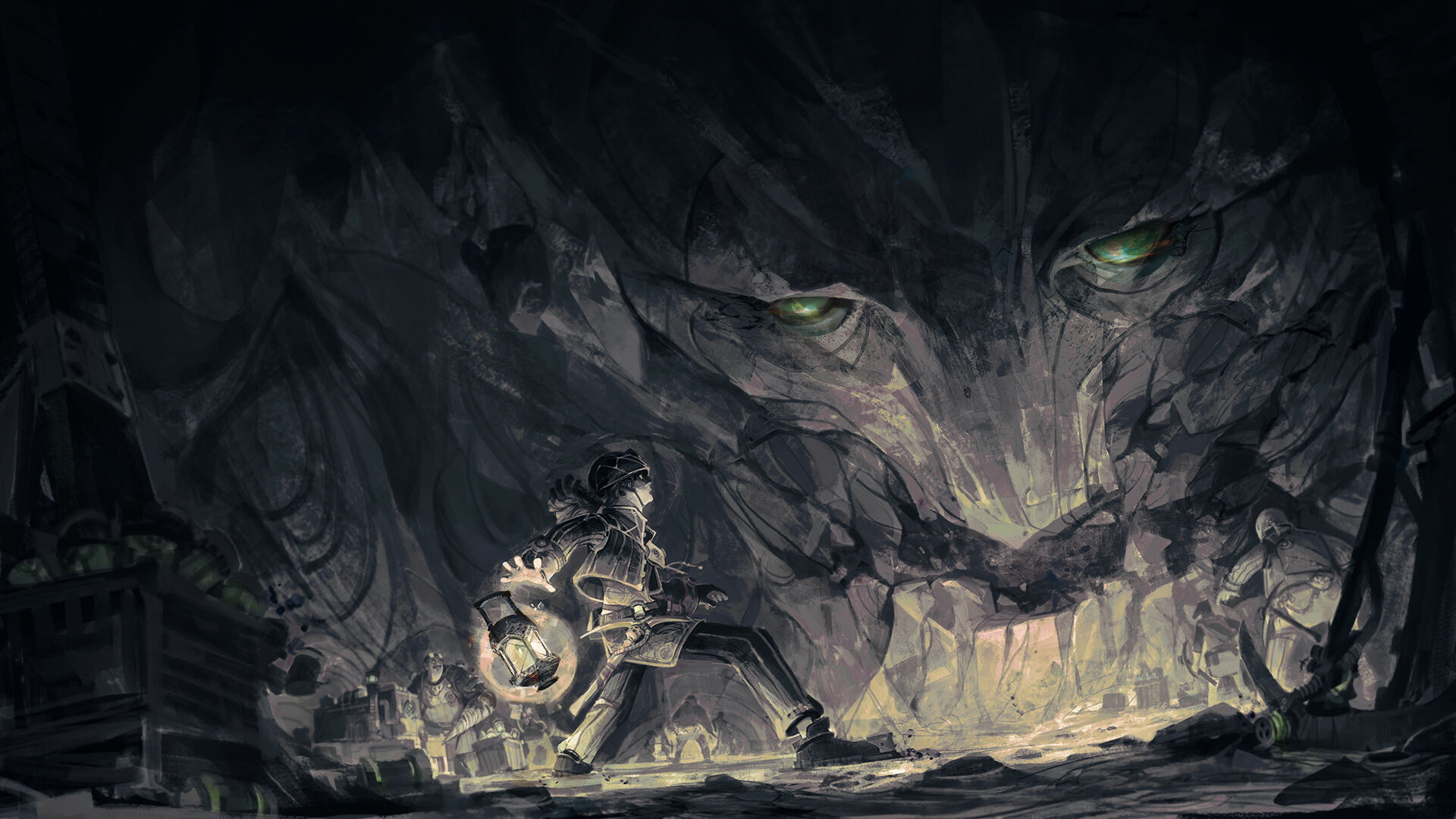 Dust hung in veils as Shoorai followed the mechanical-limbed form of Tunnel-Chief Hewlett deeper into the mine shaft. She breathed via a used esophilter, and tried not to imagine how many Zaunite miners had sucked air through it over the years. Sputtering chem-flares strung from timber roof beams dribbled glowing droplets onto their pitted iron helmets as they passed underneath.

We heard you were a good assayer, Shoorai translated. But we were sorely mistaken.

Seven years since she’d come to

Zaun, but the miner’s strange argot still took her a moment to parse.

“Say ta Ore-seer we no need

Piltie assay,” continued Hewlett. “She not savvy wit Zaunrock liken we is. They as done sunk us inna first teem!”

“I assure you, Chief Hewlett, I have delved mines everywhere from

Zaun,” said Shoorai. “I know this rock as well as you.”

“So you sayin’,” grunted Hewlett, as they entered the gallery chamber at the end of the shaft, “but rock here not be liken you say.”

Dust-smeared miners sat next to chem-drills, pneuma-picks, and crates of hexplosives. Every one of them ought to be attacking the rock in search of the hexite seam she’d promised Baron Grime was here. To see them idle railed against her work ethic.

Hewlett lifted a chem-lamp to illuminate the rock at the end of the chamber. At first, Shoorai wasn’t sure what she was seeing. Zaunite strata was most often crushed sedimentary limestone, interspersed with pockets of metamorphic rock wrought by intense, and not-so-long-ago, heat and pressure.

This was something else entirely…

Shoorai snatched the lamp and walked the length of the gallery. She pulled off her glove and ran her fingertips over the wall. Pitted and warm to the touch, with a curious umber hue—like something she’d expect to find in her native Shurima.

“This makes no sense,” she said. “This wasn’t here yesterday.”

“I try telling ya,” replied Hewlett. “We drill on the yester, jus’ liken you say. Come back on’a first bell and seen this.”

“Whatever this is, the Baron isn’t paying you to sit around doing nothing. Blast through it.”

Hewlett grinned. “So we fix’n to lay out ’splosives, yah?”

The voice boomed from all around them—a shockwave in the air, each word sounding as though it had been formed by grinding tectonic plates.

The miners took to their heels, but Shoorai flattened herself against the side wall of the chamber and pulled her helmet tightly down on her head. The voice sounded like it belonged to something titanic. Cracks spread across the ceiling of the gallery.

She looked up in time to see the pitted rock wall… move.

It shifted, grinding as it reshaped itself. Shoorai watched in amazement as it formed two deep craters that looked like closed eyes, and a projecting crag that could be a nose. Dust poured from a curved and jagged chasm that looked horribly like a vast mouth.

The face filled the wall before her, fully thirty feet across and twice that high.

Azir's bones! If this is its head, how big is the rest of its body?

wandering weaver girl perform wonders on the road to Kenethet. Shoorai met the gaze of the colossal face, its eyes a liquid yellow gem-like material.

Quartz, she thought. Not natural to this region.

“THIS ROCK IS INFESTED,” said the voice, and Shoorai pressed her hands against her ears at its deafening volume. “CREATURES MOVE WITHIN IT. BEAUTIFUL IN THEIR OWN WAY, BUT CHAOTIC. YOU SHOULD NOT BREAK THIS ROCK, IT WILL END BADLY FOR YOU.”

The eyes blinked, and pebbles fell from their rocky lids.

“Um, are… are you the mountain spirit or something?” she asked.

The brow of the face creased with a groaning rumble.

“NO. AT LEAST, I DON’T THINK SO. I THINK I WAS PART OF ONE, ONCE. SO MUCH CHAOS IN THIS WORLD, MAKES IT HARD TO REMEMBER EVERYTHING.”

“AH, WHAT INDEED?” it said, and the mine shaft flexed as the face sighed mournfully. “A SHARD OF A GREATER WHOLE. A SERVANT OF ORDER SEEKING PURPOSE. CALL ME…

Loose shale cascaded from cracks in the walls of the tunnel, and the timber supports groaned as they were subjected to stresses they were never built to endure. Shoorai didn’t like the look of the split lines on the seam above her head. They were ambitious, eager to race onwards.

“Could you stop moving? I think you’re going to collapse the cave.”

“You said the rock was… infested?” asked Shoorai. “With what?”

“THINGS THAT SHOULD NOT BE. CREATURES THAT LIVE ONLY TO CONSUME.”

Shoorai felt her heart race. Growing up in the shadow of lost Icathia, she knew of creatures that matched such a description.

“I know them,” she said. “But they only dwell in the deserts of the southern continent.”

“ONCE, PERHAPS, BUT NOW THEY THREAD THE CRUST OF THE WORLD LIKE THE ROOTS OF A POISONED TREE.”

Shoorai looked uneasily at the ground.

The rock face chuckled, and more shards of stone fell from the roof.

“NOT TO WORRY, I HAVE THEM TRAPPED WITHIN MY BODY. I WILL CRUSH THESE ONES, BUT MORE WILL COME. SO BE WARY OF DELVING TOO DEEP…”

The glow of the creature’s eyes faded as its heavy lids closed and the tunnel began to shake.

“YOU SHOULD GO NOW,” said the rock face.

Hewlett appeared behind Shoorai and took hold of her with his chem-powered arm.

“We gotsta skedaddle, assay,” he said. “We linger, cave be crushin’ us.”

Shoorai nodded, backing away from the gallery. “I’ll tell Baron Grime this seam was played out.”

Hewlett grinned. “Maybe you assay on’a square after all.”