Runeterra Prime
Rokrund is a coastal settlement of the Rokrund Plains in southern Noxus. The closest settlement is neighboring Qualthala. 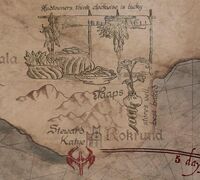 Rokrund is currently governed by steward Katye. Its primary export is the naap, a type of twisting root vegetable.

Naaps are a type of edible plant native to the areas around Rokrund. Its roots, having a similar appearance to onions and carrots, are used for baking.