Rob Blackblade, the Adventurer is a cancelled champion.

According to Colt 'Ezreal' Hallam, Rob Blackblade was pulled because he didn't fit with the game's artistic theme and the design team didn't get any inspiration from him. No aspect of Rob was deemed worthy of keeping, so he was scrapped and his place in the development cycle was filled by the Champion that eventually became

The presented information is extracted from Closed Beta 1 (25-Mar-2009), where an earlier iteration of Rob's design still exists in the game files (kit unchanged). There are minor wording adjustments for this presentation.

Active: Rob throws a knife at the target, dealing damage. This ability can

critically strike for 3x damage based on

Active: Rob strikes a vital blow on the target hero, dealing 125 damage. If Rob is

Active: All of Rob's attacks are

critical hits for the next few seconds. 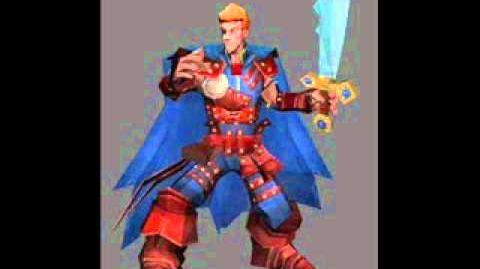