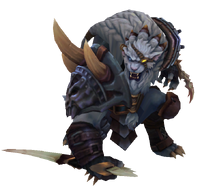 On every wall of his den, the trophy hunter Rengar mounts the heads, horns, claws, and fangs of the most lethal creatures in Valoran. Though his collection is extensive, he remains unsatisfied, tirelessly seeking greater game. He takes time with every kill, studying his prey, learning, and preparing himself for the next encounter with the one

monster he never managed to defeat.

Rengar never knew his real parents, but was raised by a human who was revered as a legendary hunter. He was an ideal pupil, intently absorbing the lessons of his father, and improving them with his uncanny feral instincts. Before his mane had fully grown, Rengar set off on his own and claimed a wide territory for himself. Along its perimeter, he mounted the skulls of his slain prey - a warning to would-be aggressors. He thought undisputed reign of a region would fulfill him, but instead, he grew restless. No beasts in his domain proved challenging prey, and without formidable adversaries to push his limits, Rengar's spirit waned. He feared that no worthwhile game remained, that he would never again feel the

Thrill of the Hunt.

Just when things seemed their bleakest, he encountered the monster. It was a disturbing, alien thing, distinctly out of place in his world. It bore huge scything

claws and devoured any animal that strayed across its path. Overzealous at the prospect of a challenge, Rengar

ambushed the monster in haste. It far outclassed anything he'd hunted before. Their fight was savage, and each suffered crippling wounds. Rengar lost an eye, but the most grievous blow was to his pride. He had never before failed to make the kill. Worse yet, the severity of his injuries forced him to retreat. Over the following days, he hovered on the threshold between life and death. He was wracked with pain, but beneath it, he felt a glimmer of joy. The hunt was on. If such powerful beings existed in the world, he would find them, and stack their heads high.

The monster, however, was a kill he wanted to savor. On his den's largest wall, he reserves a space for the beast's

trophy he swears will one day be the centerpiece of his collection.

Unseen Predator is an on-hit effect with dash and self-targeted buff components.

(Empowered) Savagery is a direction-targeted area of effect with a dash component.

(Empowered) Savagery is an on-hit effect with a self-targeted buff component.

(Empowered) Battle Roar is a point-blank area of effect with a self-targeted buff component.

Thrill of the Hunt is a self-targeted buff.

Retrieved from "https://leagueoflegends.fandom.com/wiki/Rengar/History?oldid=2917790"
Community content is available under CC-BY-SA unless otherwise noted.