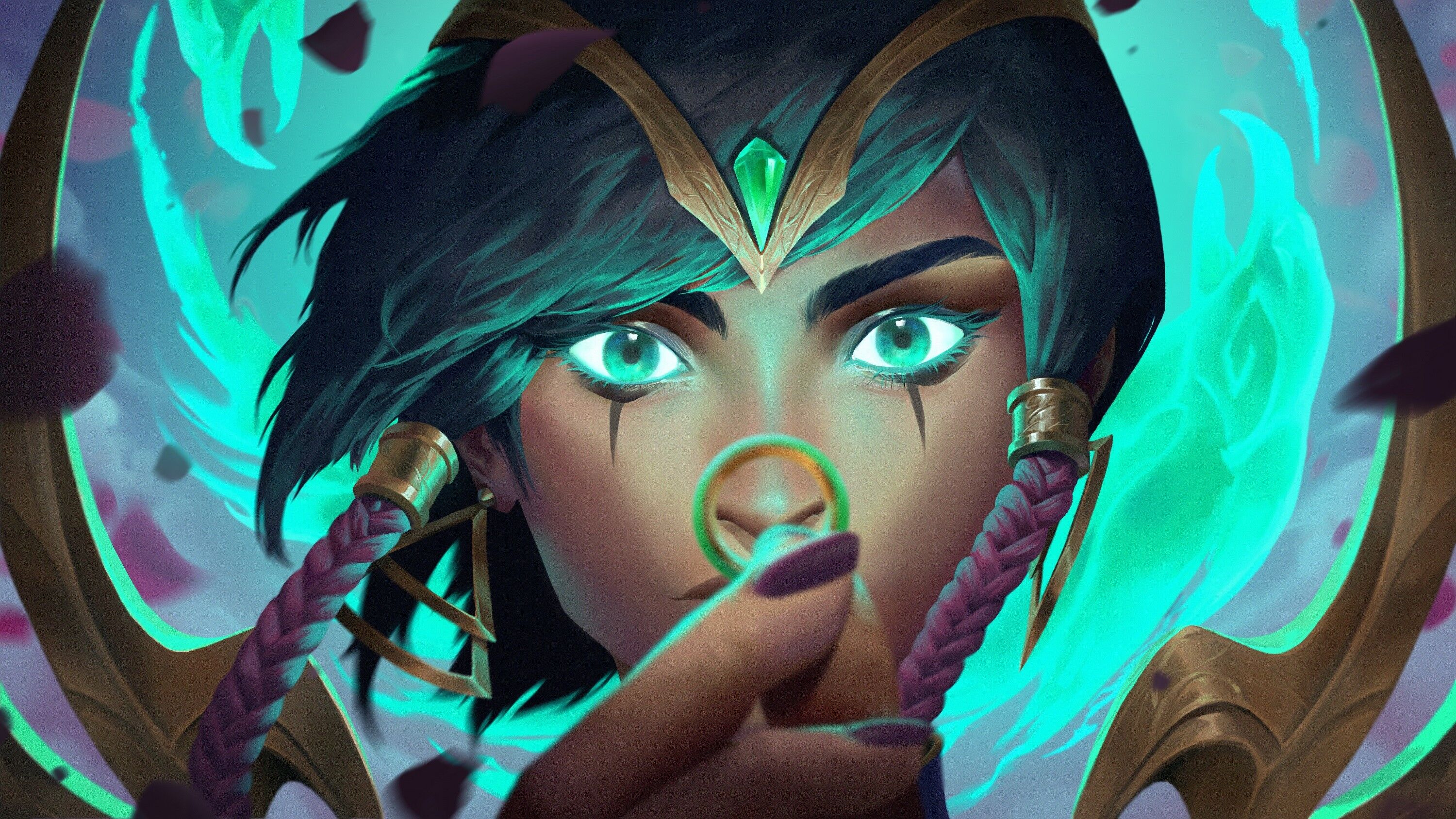 Watai twisted the jade ring on her finger anxiously as she stared up at the monastery carved into the mountainside. The Lasting Altar, home to

Karma. She hadn’t expected to find herself back here after all this time. The trip had been painful in many ways, not least because her knees had been giving her trouble. Taking a deep breath, she walked up the path, toward a small shrine that marked the entrance to Karma’s private meditation room.

Her knee buckled as she reached the entrance, and Watai fell hard onto the ground. This damned place. She learned to hate the Lasting Altar when she had visited with Jakgri some sixty years ago, after the monks had summoned him. The memories brought her as much pain as her fall. She struggled to stand.

“Are you all right?”

Watai looked up to see a tall and beautiful woman offering her hand. Although she didn’t know the woman’s face, she recognized the mantle she wore with its twin dragons of Ionia encircling her head like a halo. Karma.

“I’m fine,” Watai said brusquely. “I have an appointment to see you.”

“Welcome, wayfarer.” The woman smiled beatifically, her dark eyes sparkling, as she took Watai’s hand in her own. “Here, let me try…” Karma flexed her free hand and a pulsing green light surrounded her. Watai’s skin prickled—the glow felt cold against her skin. The woman pulled Watai to her feet. “How’s that?”

Gingerly, Watai tested her leg. The knee held. Yet seeing this new Karma wield this power broke her heart. “I can stand,” she said, her voice tight.

The other woman looked at Watai in concern. “Are you sure? You don’t seem—”

“My leg is fine, Enlightened One,” Watai snapped, pulling her hand back. “But your magic can’t heal every pain.”

She had expected the other woman to look confused or upset, but instead Karma looked… calm.

“You’re right,” Karma said, nodding placidly as she ushered Watai into the simple meditation room. “I can’t heal grief. If you lost someone in the war, there’s nothing I can do except apologize. I’ve spent years apologizing across the country, for the loss and the pain that followed my decision to support… to pursue the war against Noxus. But…” A pause, a deep breath. “I am not sorry that I—that Ionia—fought back.”

Watai and Karma stared at each other for a long beat. “Is there anything else I can help you with?” Karma asked, not unkindly.

Watai took a few moments to compose herself. “My loss was before the war.” She held up her hand. “Do you know this ring?”

Karma’s gaze turned to the jade ring and she gasped. “Yes. I gave it to… No. He? He gave it to someone.” She closed her eyes, covering them with her hands.

Watai knew from her time with Jakgri that Karma was concentrating hard, trying to access memories that weren’t fully her own. “It’s okay. Take your time.”

Sixty years ago, Jakgri had asked Watai, his betrothed, to accompany him on a trip to the Lasting Altar. Watai, who had never traveled outside their village, was excited to see more of the world. Maybe this was how their life together could be from this point on. And so Watai and Jakgri set out together on the two-month journey to the monastery.

You will love it here, Jakgri had exclaimed. His smile was burned into her mind. I know it’s far from our village, but we’ll have the woodweaver grow plenty of bedrooms in our house for your family when they visit. We’ll live together in the town just outside the monastery. Isn’t it wonderful?

But the life they had dreamed of together was not to be. Watai quickly discovered that she couldn’t be so far from her home and family and still be happy. But Jakgri’s path led him here—there was no way he could go back. He had a duty to fulfill. So she journeyed back to their village alone, still wearing his ring, never expecting to return. Never expecting to see her Karma again.

Finally, Karma’s hands fell to her side as her eyes flew open. Her irises glowed the same green that Jakgri’s had when he was speaking with the countless voices in his mind. His past lives, now hers. Karma blinked and her eyes faded to normal.

“Watai?” There was incredulity in her voice, the fear that she was wrong.

But she wasn’t. “Oh, bless the spirits,” Watai said, wiping tears away before they had a chance to fall. “I wasn’t sure if Jakgri was… himself, in you.”

“He is and he isn’t. His memories are mine, but…” She trailed off, suddenly timid.

That was fine. That was enough. Watai looked directly into Karma’s eyes, hoping Jakgri could see her through them. Watai wanted to unburden her heart before she died full of regret. “I’m sorry, Jakgri. I wish I could have stayed here with you, or that you could have returned home with me. I hope you were able to find another to love. I don’t like to think of you alone.”

She removed her ring and placed it in Karma’s palm, closing the woman’s long fingers around it.

“No.” Many voices spoke as one, Karma’s eyes alight with the souls of the past once more. “Jakgri loved you to the end of his days. His only regret in becoming Karma was that he could not share his life here with you. But he was never alone. He had the spirit of Ionia with him always.” She held the ring out to Watai. “He desires for you to keep his ring, if you still want it.”

Under Karma’s watchful gaze, Watai slipped the ring back on her finger. It felt right, for she had never loved another either. “I love you, Jakgri,” she whispered, shaken but elated. “I love you.”

A dark-eyed Karma looked back at Watai. “I’m sorry. It never lasts long.”

Watai nodded, her throat tight. “Thank you. For this.”

“I should be thanking you, Watai.”

“He hasn’t spoken to me,” she murmured. “Not since the attack. He… was disappointed, then went silent. Years without Jakgri’s voice, without the wisdom of the Karma who came before me.” She took Watai’s hands in her own with a sudden intensity. “Thank you, for bringing him back to me.”

Karma—or Darha, as she introduced herself—asked Watai to stay a few days longer at the Lasting Altar. Perhaps together they could begin to heal, as one of them said goodbye to Jakgri and one welcomed him back.

As she left the meditation room, Watai looked at the glint of moonlight on her ring, admiring its fidelity. Like her love for Jakgri, and his for her, it had stayed true, unscratched and unsullied, for over sixty years. Even when she died, when her bones were picked clean by the sky, this ring would remain, a token of the love they shared.

Through Karma, their love would outlast lifetimes.

Lore and Events
Retrieved from "https://leagueoflegends.fandom.com/wiki/Remember_Me?oldid=3151031"
Community content is available under CC-BY-SA unless otherwise noted.