Runeterra. Cards within a region tend to share mechanics such as certain keywords and tend to synergise well with each other, and combining cards from different regions can lead to unique synergies and playstyles, with their own strengths and weaknesses. Game Modes have specific restrictions on the number of regions that can be in a deck.

Runeterra is a world divided. Each region holds within it the secrets to unparalleled power and the champions equipped to carry you to victory. All that remains is a simple choice... Whose side will you chose? Will you brave the frozen wilderness and focus your gaze on the Freljord? Or will you pass through the Black Mist and face the spirits of the Shadow Isles?

Legends of Runeterra has cards that appeal to a variety of playstyles. When you activate a region, your growth will result in greater rewards within your chosen realm. Don't feel beholden to any one region, however. Your progress will be saved if you focus your attention elsewhere, allowing you to activate any region at any time.[1]

A deck can consist of cards from a certain number of regions, depending on the Deckbuilding rules being used. In the main gamemodes, decks can only contain up to 2 regions, with some mechanics even disincentivising this, such as

Allegiance - which provides a trade-off when building decks between the consistency of effects, or having access to the benefits other regions provide.

Rewards tab of the main menu, a player can choose one region to progress at a time, and will then gain more cards from the region when leveling up.

There are currently 9 regional card sets:

Targon e. The mechanics and cards of each region are based off the eponymous

Runeterra. Each has their own set of strengths and weaknesses.

Risk and Reward
Across the Guardian's Sea, nestled amongst the Blue Flame Isles,

Bilgewater Bay is as lawless as the denizens that call it home. Smugglers and cutthroats lay claim to these shores, making a name for themselves with sharp minds and sharper blades. The land is not the only perilous place, for danger lurks beneath the waves. Are you prepared to risk it all for the ultimate prize?

Stand Together
Justice. Honor. Duty. Proud Demacia sits on the northwestern edge of Runeterra. Once a safe haven from a brutal war,

Demacia is now caught between the shifting tides of time. Can this mighty kingdom evolve to further serve its people, or do they face obsoletion along the march of progress? Stand on the side of justice!

In the bitter cold of the frozen north known as the

Freljord, the wilderness is torn asunder from a savage, three-way civil war. Those who call this place home must find the fire within to persevere through harsh conditions and stand as paragons of fortitude and resilience. Can you weather the path to victory?

Balance: the cornerstone of the First Lands we know as

Ionia. Once, it existed aplenty, with the spiritual and physical worlds coexisting together in harmony...but such serenity is fleeting. Noxus, bent on imperial expansion, brought their insatiable hunger to Ionia's shores. Though the empire was driven out, there is an air of uncertainty hovering over the land. Are you willing to pay the price for peace?

Noxus sprawls across the continent in a struggle for complete dominance. However, within the region's borders beats a heart fueled by the blood, sweat, and tears of its dedicated citizens, allowing any who would try for power to step forth and seize victory...if they're able. Do you have what it takes?

Zaun may seem worlds apart, but an unusual harmony connects them beyond mere proximity. On the surface, Piltover is a prosperous city of industry. Standing as Valoran's cultural center, innovation and ingenuity are prized. However, amidst the cliffs beneath Piltover lies Zaun. Swathed in a smog-induced twilight, Zaun thrives in the shadow of its sister city. When the brilliant scientists above find society too constraining, they journey below, into the toxic air to conduct their experiments. Will you choose to stay on the surface or chance what lurks beneath?

Blessed Isles were once a thriving, fertile land...until the king of the Isles, beset by grief, sought to defy the natural order of the world, bringing ruination to the land. Now the

Shadow Isles, veiled by the sinister shroud known as the Black Mist, leech life from any creature who dares step foot on those cursed shores. Do you dare turn your gaze to the Shadow Isles?

Awaken Your Empire
The champions of Shurima don't simply survive the harsh conditions of the Shuriman desert; they thrive on it. Merciless mercenaries and ascended warriors alike grow strong with the blessings of the sands. Are you ready to summon your own inner strength?

The champions of Targon gaze toward the heavens for answers, and sometimes the heavens gaze back. By the glory of day or the strength of night, all may shoot for the stars. Are you ready to conquer the summit?[2] Main Mechanics: Beholding unit groups, Untargeted 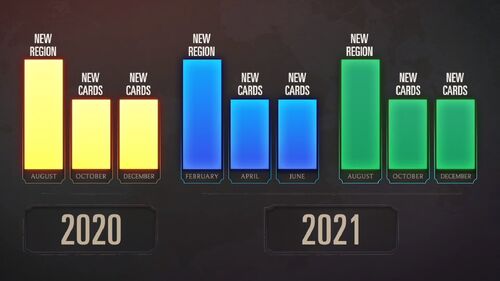 )
Add a photo to this gallery 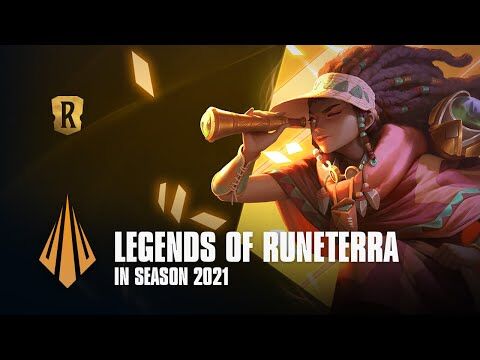 Legends of Runeterra
Retrieved from "https://leagueoflegends.fandom.com/wiki/Region_(Legends_of_Runeterra)?oldid=3264048"
Community content is available under CC-BY-SA unless otherwise noted.