channel for 8 seconds after a 0.5-second cast time. If the channel is not

channel for 4 seconds after a 0.5-second cast time. If the channel is not

Recall is an ability that all players have, regardless of the champion they are playing. It causes your champion to channel for a few seconds after a brief delay. If the channel is not interrupted, it causes the champion to appear at their team's fountain.

Possessing the following buffs will upgrade

The following table refers for interactions while the user is

channel for 4.5 seconds. If the channel is not

Dominion was released, Recall was remade to fit in to the game mode's fast-paced style, creating Enhanced Recall which had a much shorter cast time.

Improved Recall that reduced the channel time of Recall by 1 second and Enhanced Recall by 0.5 seconds.

Phasewalker that reduced Recall's channel time by 1 second and Enhanced Recall by 0.5 seconds.

The Recall function was originally tied to

Blue Pill, a purchasable alpha item that could be activated to return to base. The function was then made into an optional summoner spell, and eventually into a feature inherent in all champions.

Since the release of

Vi, with the exception of

Quinn, the Recall animations between the classic skin and the first released alternate skin of a champion differ from one another. For example,

Original Lucian folds his guns before him, while

Hired Gun Lucian produces a chair to sit in with drinks in hand; or

Original Neeko grows a tree and blend in with it, while

Winter Wonder Neeko produces an ice ring and perform on it.

Since 2018, most new skins are priced at

1350 or higher, new skins are almost guaranteed to have new recall animation. However,

Prestige skin can reuse the base skin animations.

Although Recall is disabled on the

Howling Abyss, attempting to do so by pressing the key bound to it will play the animation for the respective champion or skin. If player has a Little Legend, it also uses its recall animation if it has one.

Challenger rank of the league system were given special, golden particles for their Recall animation. These particles would only be visibly golden for the 'regular' Recall but not for

Empowered Recall nor the minimap representation of Recall. Additionally, this special Recall animation would play in all unranked queues and ranked queues, but only in the particular ranked queue they are Challenger in (be it Solo/Duo Queue or Flex Queue). 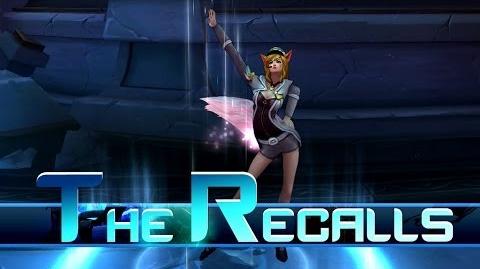 League of Legends - The Recalls (All Recall Animations June 2014 Update)