Wild Rift has a ranking system that matches players of a similar skill level to play with and against each other. It comprises ten tiers that each distinguish skill echelons, the higher tiers track standing similar to the League system.

Upon reaching player level 10, the player can monitor their league standings in the Ranked queue interface.

A season lasts for 3 months. At the end of the season, the rank results are tabulated and players will receive rewards based on their standing.

Each tier from Iron to Diamond is divided into four divisions, depicted by a roman numeral starting from IV (4 being the lowest) to I (1 being the highest).

Master tier and higher do not have divisions, they are instead exclusively reliant on VP count and the population of players within these rank tiers. 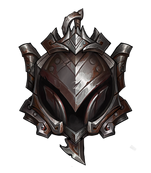 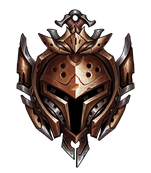 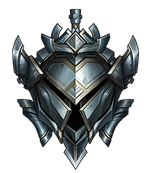 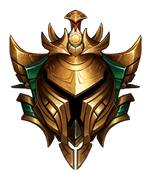 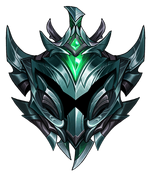 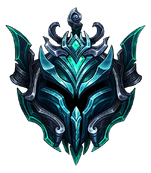 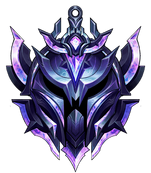 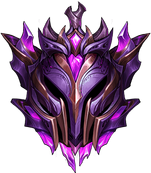 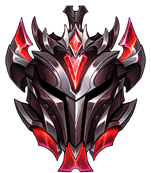 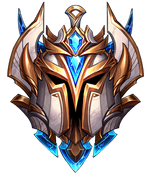 This information applies to all tiers that contain multiple divisions, except Diamond.

Division progression is distinguished by a

Mark (referred in-game as Diamond) that is earned and lost by winning and losing matches. Each tier has a specific number of marks, an overfill will advance the division, while a deficit will regress the division.

Fortitude is generated by playing matches, the amount is based on match victory and how many achievements are earned in a given match. Each tier has a specific Fortitude maximum, reaching the maximum will automatically consume the amount to grant 1 Hex Shield that prevents 1 Mark loss when it occurs. Fortitude will carry over in promotion and demotion.

Fortitude can be deducted as part of a match penalty (e.g. leaver), a mark will be deducted upon reaching -400 Fortitude.

Mark loss will eventually regress the rank to the next lower division, which can also result in tier demotion if applicable. Iron–Bronze tiers have no Mark loss.

Tier-loss Protection: With Tier-loss protection, Mark loss is prevented for 2 matches in the event that the loss would cause tier demotion.

Entry into a ranked ladder comprises a provisional period that determines the current rank on through the end of the period. During this time, there is a 2-Mark gain per win and no Mark loss. Promotion series is bypassed and the player's provisional rank is private.

The current provisional period is 10 matches, starting from Iron IV-1. Before reaching Iron I, mark gain is increased to 5.

This information applies to all tiers that do not use the Mark system (Diamond to Challenger).

Division progression is distinguished by Victory Points (VP) that are earned by winning ranked games and lost by losing ranked games. The VP amounts fluctuate based on a variety of factors, chiefly by the skill matchup. Within Master–Challenger, VP is shared and there is no VP limit. Routinely at 00:00 UTC, VP counts are tabulated and players will be sorted into the appropriate tier based on their percentile.

The VP system includes activity score that indicates play rate. Playing games adds towards the player's "banked games", up to a maximum of 7 games. 1 game is removed from the bank per day; if no game can be subtracted, the player loses 8 VP instead.

As the highest tier, Challenger rank can be viewed in a public leaderboard from the Ranked queue interface. The data is updated every 30 minutes.