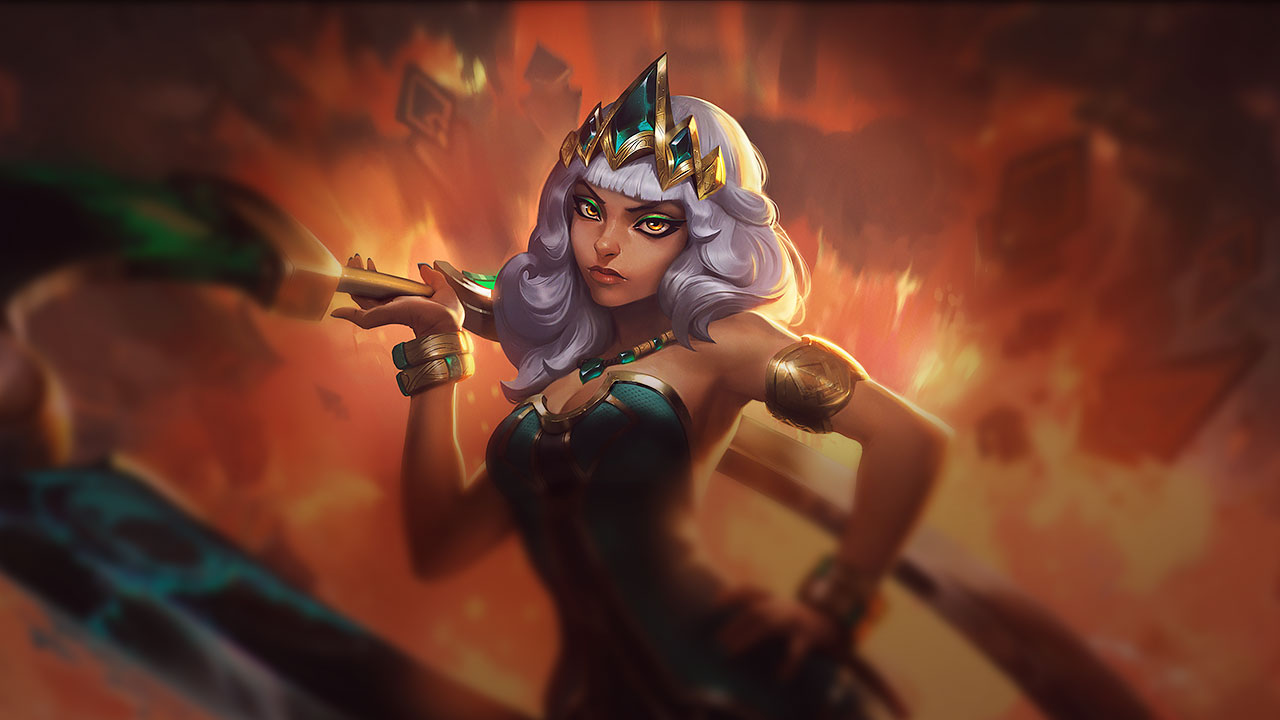 Empress of the Elements

Qiyana is a champion in League of Legends.[1]

This effect cannot occur on the same target more than once every few seconds.

Gathering an Element with

Active: Qiyana slashes forward in the target direction, dealing physical damage to enemies in a line, reduced to 75% damage against targets beyond the first. Edge of Ixtal deals 150% damage against

Gathering an Element with

reset the cooldown and upgrades Edge of Ixtal into Elemental Wrath.

Audacity's dash towards an enemy

champion and the target is within 150 units of Qiyana at the end of the dash, Edge of Ixtal will autonomously aim at the target.

Active: Qiyana hurls her blade in the target direction that blasts in a line upon hitting an enemy or maximum range. This consumes the current Element to empower the blade with an additional effect.

Enemies hit are dealt Edge of Ixtal's physical damage, reduced to 75% against subsequent enemies beyond the closest. Elemental Wrath deals 150% damage against

Brush: The blade creates a grass field around Qiyana that lasts for up to 3 seconds, granting her

20% bonus movement speed until she attacks, casts an ability other than

Terrashape, or exits the field.

roots enemies hit for 0.5 seconds, then

60% bonus damage against enemies below 50% of their maximum health.

on-hit and basic abilities. While out-of-combat and moving near the Element currently being held, she gains

A target Element is required to cast this ability.

Once Terrashape has been learned, Qiyana is automatically given the

Qiyana can cast any of her abilities during the dash.

dashes a fixed distance towards the target enemy and deals physical damage if they are still in range upon arrival.

Qiyana can cast any of her abilities during the dash.

Active: Qiyana sweeps a windblast in the target direction that

knocks back enemies hit, though not through terrain, and stops upon hitting Terrain.

The windblast creates a cascading shockwave across any River or Brush it passes through, as well as around the borders of Terrain it reaches, dealing physical damage to enemies hit, with the damage based on the target's health being capped against

stuns enemies hit for 0.5 − 1 (based on proximity) seconds, and grants

sight of the area along its path each for 0.75 seconds. 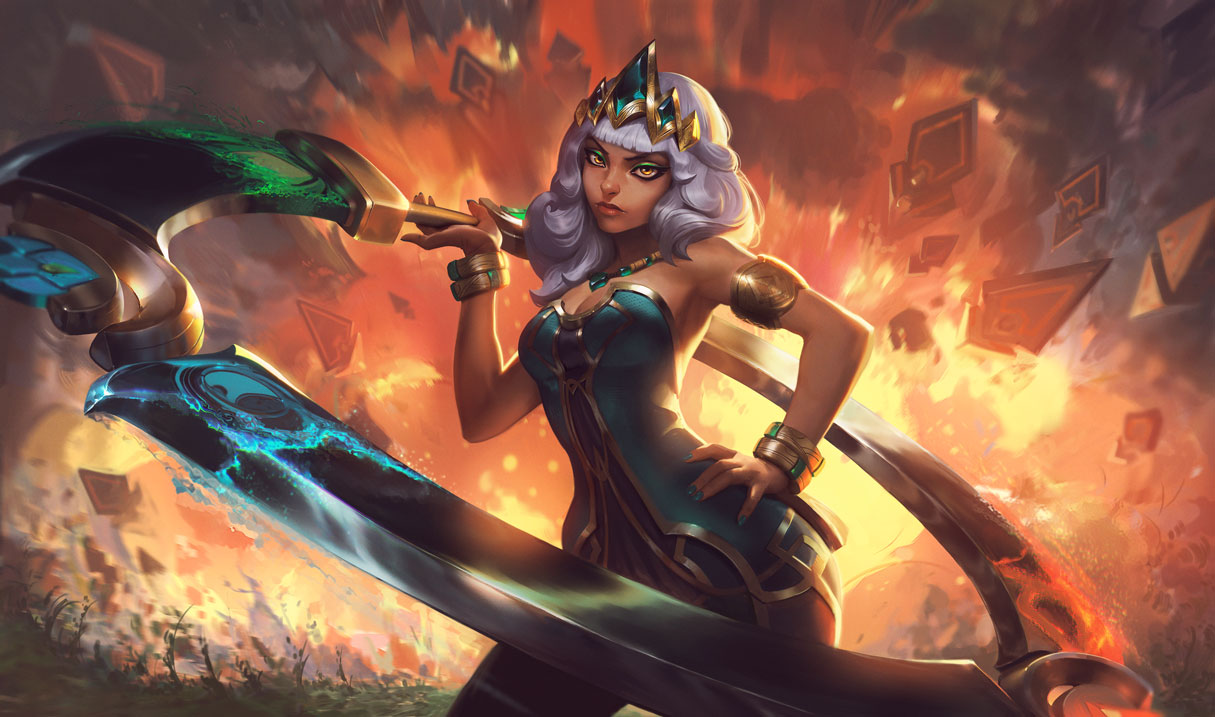 975
28.06.2019
In the jungle city of Ixaocan, Qiyana plots her own ruthless path to the high seat of the Yun Tal. Last in line to succeed her parents, she faces those who stand in her way with brash confidence and unprecedented mastery over elemental magic. With the land itself obeying her every command, Qiyana sees herself as the greatest elementalist in the history of Ixaocan—and by that right, deserving of not only a city, but an empire. 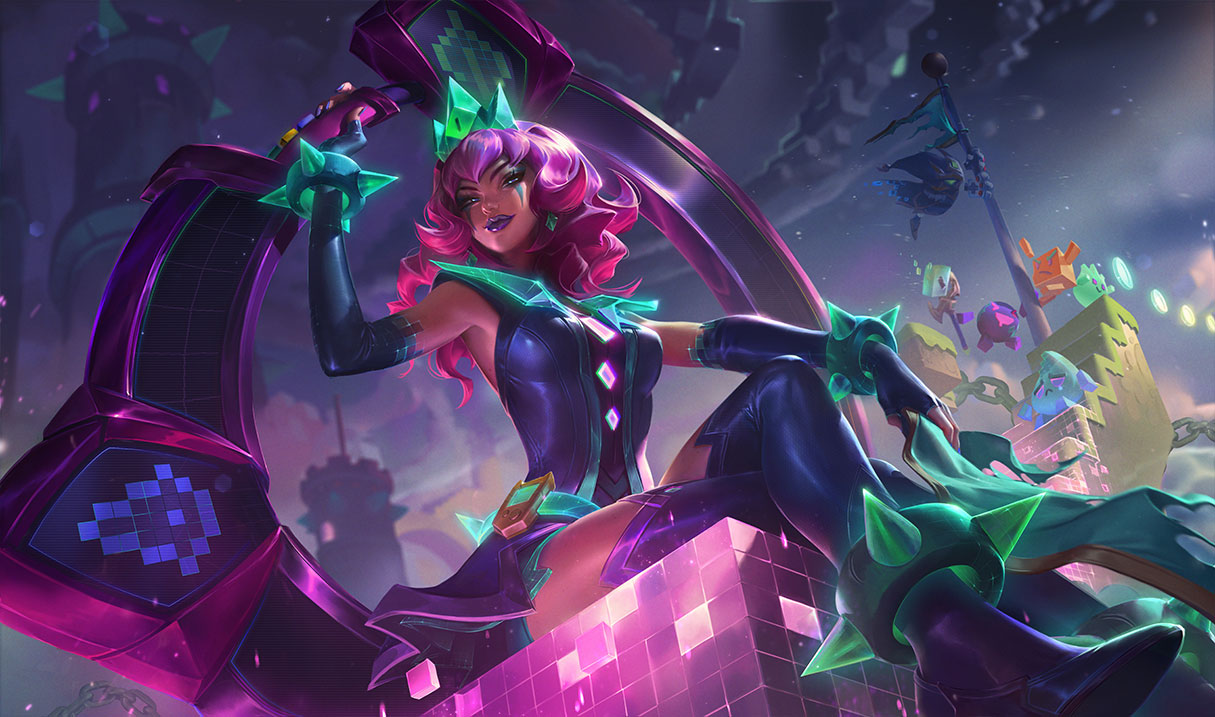 1350
28.06.2019
A princess constantly in need of saving in the 1981 arcade port of “Super Ixaocan Bros.,” Qiyana needed very little convincing to empower herself with malignant Battle Boss code. She wasted no time testing her newfound abilities on the aforementioned Super Ixaocan Brothers. They're dead now. She lives in their castle. 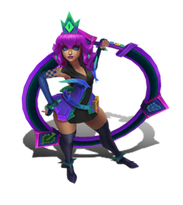 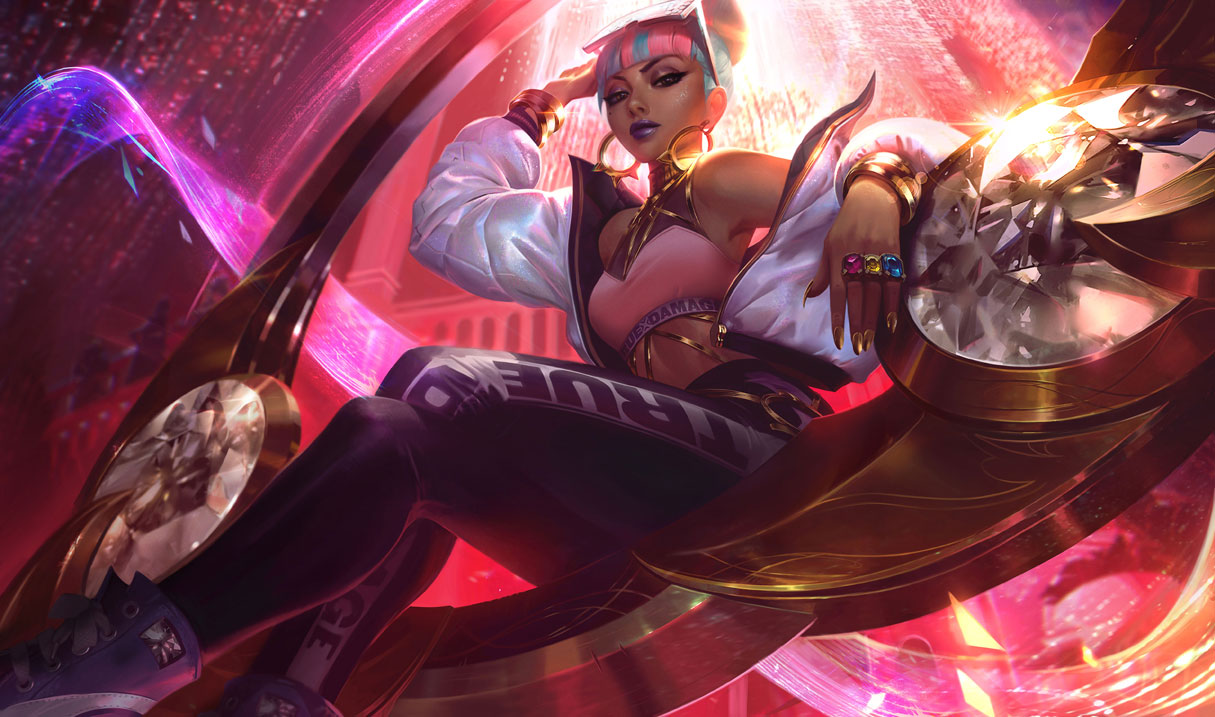 1350
10.11.2019
Qiyana is the daughter of Latin music royalty. With her family's esteemed reputation, she has an easy path to superstardom—and yet, she has her eyes set on something grander. With her brash confidence and rebellious persona, she is determined to change the game in not just music, but the entirety of pop culture. 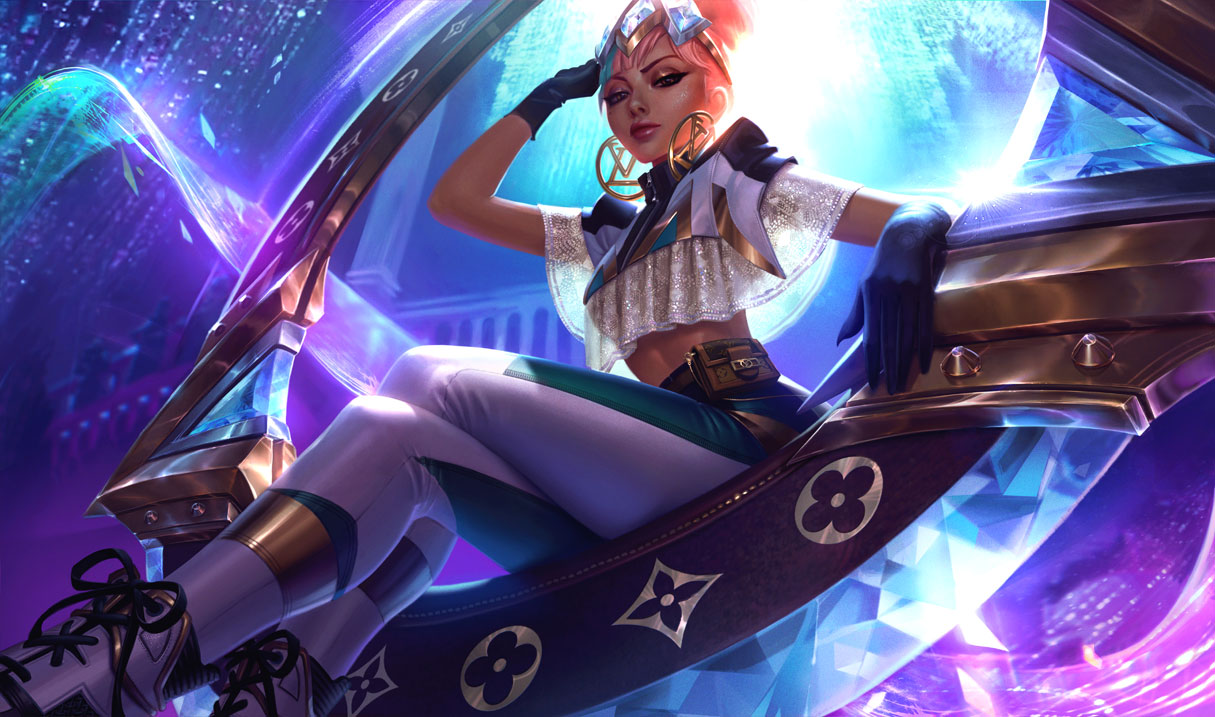 Prestige True Damage
View in 3D
Special
10.11.2019
Always a fixture in the spotlight, Qiyana dressed to impress at True Damage's sold-out concert in Paris. While the paparazzi swarmed her with photos and questions, she reveled in the attention, knowing this was only the beginning of her empire of celebrity. 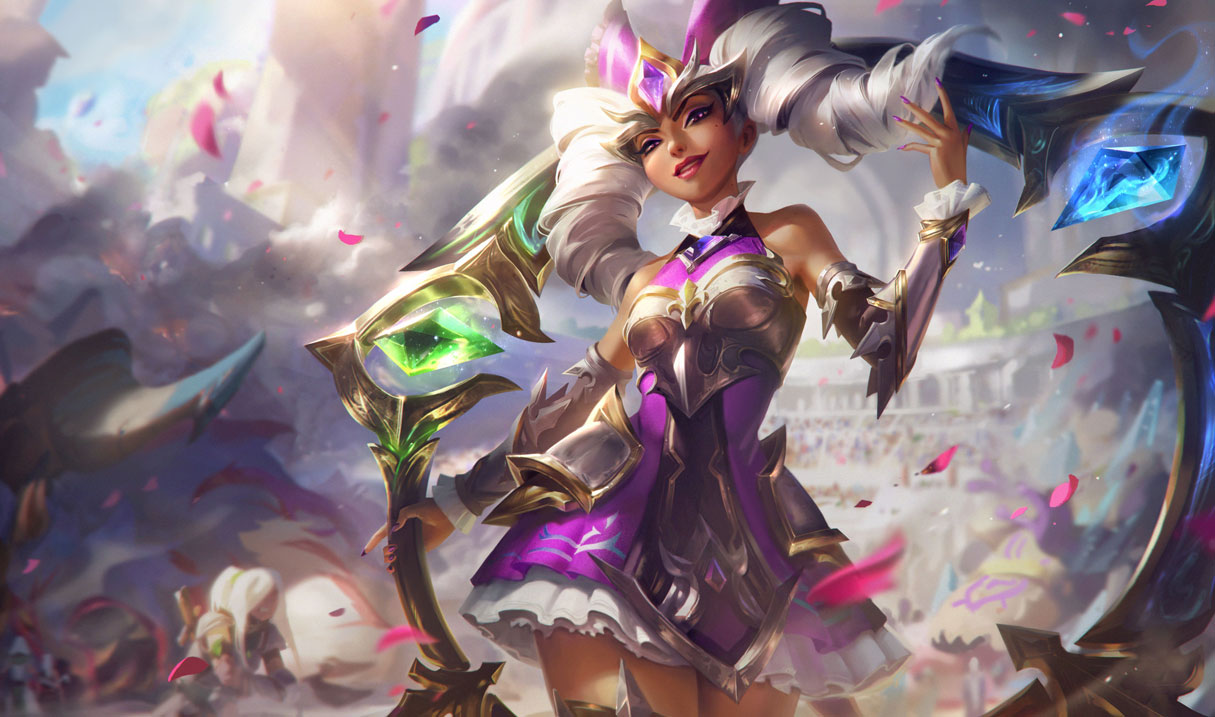 1350
10.12.2020
Qiyana is the youngest in a line of sisters who have been Queens of Ixtal for most of the recent Coronations. She's been waiting impatiently for her chance at the Crest and the title. Now that she has it, she intends to use the power she gains in the tournament to remake Ixtal in her vision. 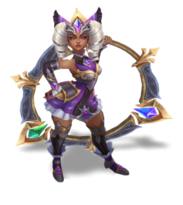 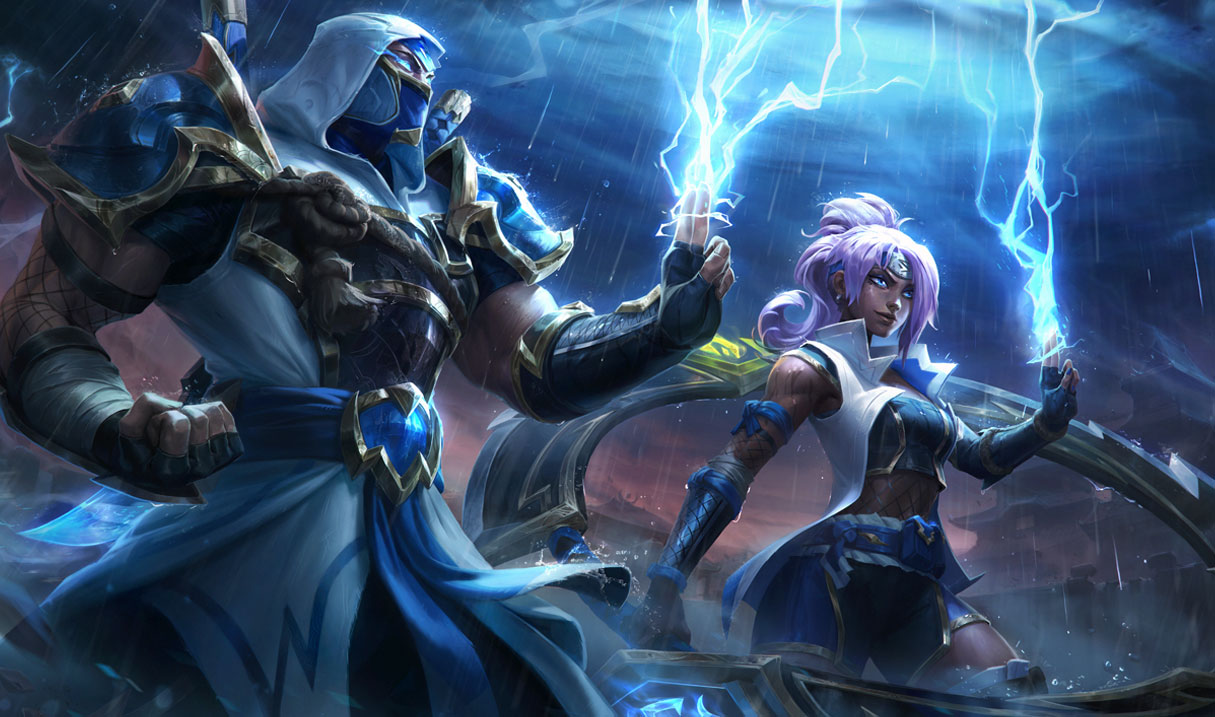 1350
17.02.2022
Tempestuous as the Storm itself, Qiyana braved the Cloud Ritual despite warnings that no one had survived in years. Perhaps it was her display of stubborn courage the Storm found worthy, or something else; either way, she is now Shen's student, determined to master lightning the same way she mastered the other elements. 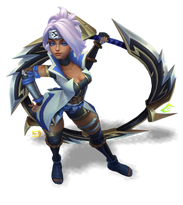