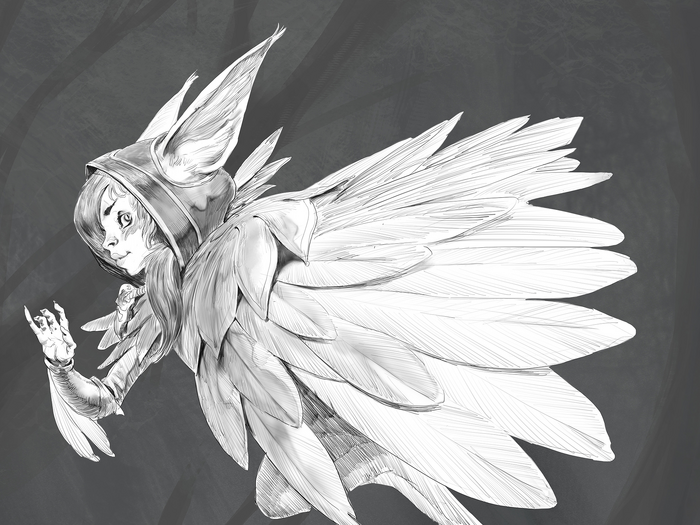 ...but with your heartfire by your side, no mission can withstand your graceful strike.

He's not listening. He's fixated on his own golden

feathers - as if they'd changed from when he cleaned them this morning. I'm going to have to repeat the plan. Although, thinking it over again, it probably was too complicated for a rescue mission. Simple is better.

"They will kill me if they catch me", I tell him.

"Who?!" He looks ready to kill at the thought of anyone harming me.

"Then I'll distract them!" He puffs his chest out. "When?"

"Look for a green flash before the sun sets. Then draw the guards away from the western walls while I run along the ramparts to the cells."

"I put on a show the moment the sun sets", he says like it was his idea. "Where do we meet?"

"At the gate. I'll throw a golden blade into the sky. But you have to be there in ten breaths." I pull one of his feathers from his cloak. It's warm on my fingers. A memory floods back of me lying in his arms by the Aphae Waterfall. The sun filtering through the leaves, catching the edges of our feathers as they lay atop each other. That was a lovely day.

"I will be at the gate the moment you throw the blade", he swears.

I take his hand in mine and lean close. "I know."

That smug, confident grin cracks his face. I want to slap him. Or kiss him. Or both.

"Now, darling - if I were you, I would stay behind the cover of the tree line, so you're not spotted."

Our embrace is so warm I wish it would last all night. But the sun is dangerously close to the horizon, and our esteemed consul isn't going to escape a dungeon guarded by a horde of

shadow acolytes on his own.

Rakan tells me to be careful as he wanders away, looking at the sky. Every time he leaves, my heart sinks. I'm sure it won't be the last time I see him. Although, one day, it might.

"Remember, my heartfire", I whisper after him. "Sunset."

I dart in between the fortress' parapets unseen. Years of avoiding the stares of humans taught me their many blind spots.

Six acolytes guard the gate leading to the dungeons. They carry double-firing crossbows, swords tucked in their belts, and who-knows-what-else in the pouches fastened around their waists. I slink along the inner wall behind them to get within striking distance. I pluck five of my

feathers and stack them neatly in my palm, holding them in place between my index finger and thumb, ready to send them flying.

There's a noise from outside the walls. The crash of a gong. Shouts. Confused men. It has to be Rakan.

The prison guards hear it, too. Worry chokes my heart. I hope my love is okay. I know he's going to be okay. He'd better be okay, or I will force a necromancer to resurrect him so I can murder him myself. He knows I'll do that, too. I'll figure it out.

The guards are distracted from their posts. He's early, but it's perfect timing. I can get in without needing to fell a single one of them.

I almost reach the dungeon door, when I see another guard climb the parapet and take deadly aim with his rifle. Nobody aims anything at my Rakan. I'll have the still-beating heart of anyone who dares to harm as much as one of his feathers. It'll make a cute beating-heart necklace.

I stop. The prisoners won't be going anywhere. I've got time to turn this guard into a sieve.

I leap back toward the parapet. The first

feather I throw slices off the barrel of the gun. It clatters loudly to the floor. The rest slice through his chest. He drops like a bag of turnips.

"Intruder!" one of the guards at the gate shouts.

I duck and roll as crossbow bolts ping off the stone wall behind me, or stab into the wooden posts. Staying low, I race straight toward the acolytes who are fanning out to get better angles. I leap. They shoot where they think gravity will take me, instead of where I am: hovering in the air.

I throw another handful of feathers, shaping them into

Five of the guards drop, my quills sticking out of their chests. The remaining acolyte narrows his eyes and squares his shoulders, ready to fight. His sword is out before my feet touch the ground.

"Your soul will serve me forever", he grunts. I can feel the shadow magic bound up in his blade, the essence of every life it has taken.

I laugh. "I killed more people in the last twenty paces than you have in your entire life."

The acolyte hesitates before slashing wildly in my direction. His little sword leaves wavering trails of darkness. I don't have time for this, the sun is setting. I turn my back.

With a snap of my fingers, my

quills tear free of the corpses behind the acolyte, and fly back toward me.

I hear the sword clang to the floor a moment before the dull thud of his body. I'm sure the Order of the Shadow will find some way to harness these men's souls into a slingshot or something. I don't really know how these guys work, but good on them for being so economical. One shouldn't waste life essence.

I take Rakan's feather and launch it high into the air. It hangs in the sky, a golden message that should turn some heads. But there's only one who knows what it means.

Meanwhile, I have a date in the dungeons with the consul.

He looks terrible sitting in a cage. Emaciated. Weak. Beaten. He doesn't look up, figuring me for one of the guards. He and his mate are Sodjoko, but his entourage are vastaya from other tribes. Their harrowed eyes thank me more than their tongues. They know as well as I that this is no time for gratitude. We're not out of the fortress yet.

As I lead the prisoners toward the eastern gate, I'm perplexed by the appalling lack of guards. Nearly every post is deserted. Isn't this supposed to be a fortress? Who makes their schedules?

We round past the armory and the barracks. There's the gate. Looks like Rakan found the guards. Dozens of them. They're surrounding him. My feathers bristle. Heartbeat necklace, here I come!

Rakan reaches us. His smile turns from confident to bemused as he speaks with the consul. Akunir is one of my father's oldest friends, and the most important of our ambassadors. I have much to discuss with him once we're out of this.

"All of you, run for the tree line", I command.

They're panicked, but thankfully Rakan took out the riflemen. More of us will survive crossing the field. "Run!" I yell.

Akunir's too slow. Rakan begins to lead him toward the forest.

The consul grabs at Rakan. "No. Please, protect Coll." Rakan turns back toward her.

I shake my head. Rakan understands. He drags the consul behind him.

I nod to the strongest-looking juloah. He lifts Coll in his arms. She calls him Jurelv, and he pledges on his horns to keep her safe.

He makes it ten paces before the first arrow strikes him, but he doesn't stop. He carries Coll into the forest. The shadow acolytes surge forward after them.

Instead, I join the fight.

And it's not pretty.

We were safe under the forest canopy by the time Jurelv's body could ignore its wounds no longer.

Coll kneels next to his corpse. His blood is on the leaves. We have already prayed that his spirit finds our ancestors in joy and peace. His family will mourn for moons.

I'm used to death. It doesn't move me as it once did. Rakan takes it hard: I have to be strong for him.

At least the consul is safe. After taking his hand off his wife's shoulder, he turns to me.

"I have friends in the south", he says. "The Kinkou must be informed."

"Humans broke the pact." I feel my blood rising. "How can you not see this as a grievous trespass? To them, magic is power. To us, it is life. They will never respect our boundaries."

"Humans are a splintered race, Xayah. Only

Zed and his shadows broke the pact. They do not speak for all men."

"You are naïve. Your friends in the south will betray you. Then, they will turn on us all."

"The Kinkou are honorable. They will believe me. I trust them."

"So you're not naïve, you're an idiot." Akunir is shocked that I dare speak to him like this. I reject the notion of being diplomatic. Diplomacy will not restore life to the dead.

Coll stands up. Her face is a mask of grief and anger. "I will go back north, Akunir. I will tell them what was done to us."

I honestly didn't think she had it in her.

The glow fades from Akunir's eyes. "Coll, no."

"I will bear word of Jurelv's fate to his kin, and mourn with them. Then, I will muster arms and prepare the tribe to fight."

"You cannot do that!" the consul proclaims.

Coll ignores him. "I forsake my claim to you. I forsake your claim to me."

The consul takes a step toward her, but Rakan stops him.

"I will speak with my mate", Akunir says to Rakan. To his guards.

But Coll is already turned away. She looks at me, and I no longer see a diplomat's wife. I see a warrior. She gathers those loyal to her - all but two of the consul's entourage.

"Thank you, Xayah", Coll says before she turns north and walks farther into the forest.

Akunir and his guards watch her leave, then wordlessly set off to the south.

Rakan moves in close to me. I feel his heart beating in time with my own.

"Promise me nothing will come between us like that, mieli", I say.

I watch Coll as she disappears among the trees.

I bury my face in his chest. He drapes his cloak and arms around me. My head rises and falls with his breath. I could stay here forever.

He smiles and kisses my forehead. The vows we took at the Aphae Waterfall spring to mind. His heart beats for me, and mine for him. Home is within his arms, his breath, his smile.

There is no one better than Rakan.
▲ TOP ▲

Lore and Events
Retrieved from "https://leagueoflegends.fandom.com/wiki/Puboe_Prison_Break?oldid=3151030"
Community content is available under CC-BY-SA unless otherwise noted.