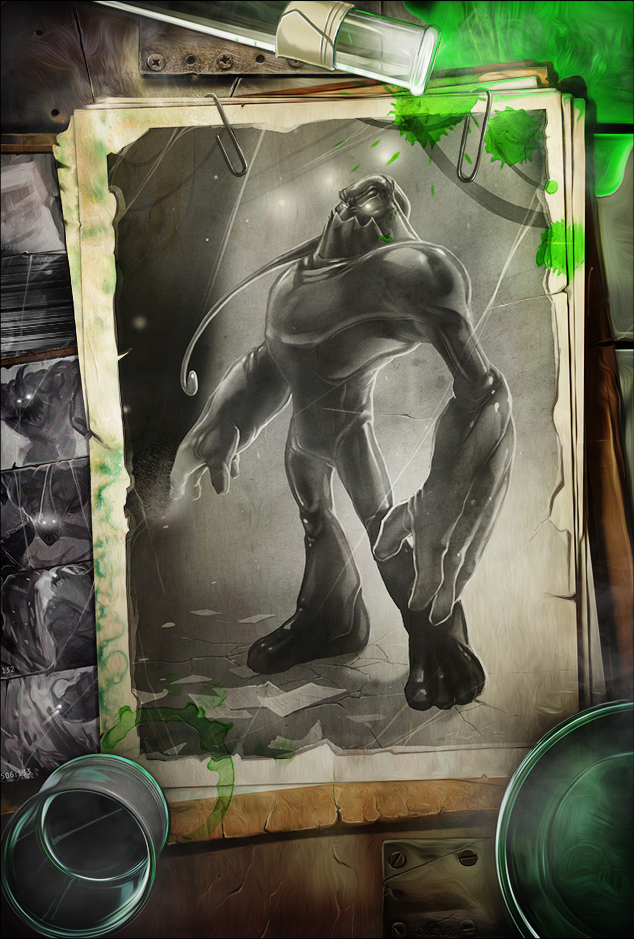 Their thoughts soak into me. It's nice, like a warm bath, though I tend to stretch out pretty thin when things get too hot. There's always a few people in the mix who aren't so happy. After all, life in Zaun can be hard. Some people are nursing broken hearts, while others can't stomach the thought of another shift and feel nothing but seething resentment. I absorb the good and the bad, because that's the way I was made. The bad feelings sometimes make me angry, but there's nothing I can do about that. My parents taught me it's okay to feel bad sometimes. Without the bad you can't properly savor the good.

I follow the crowd until people start to go their separate ways. A few lingering bad feelings drift through my thoughts, so I decide to do something good to push them out. I seep down through a network of cracked vents I've been meaning to fix for a while, but just hadn't gotten around to. I collect fragments of metal in my body as I go, extruding them from my amorphous form wherever there's a crack, then heating my outer layers to weld them in place. With the cracks sealed, clean air from the pump station higher up in Piltover flows once again. Which hopefully means fewer cases of lung blight in a good many of the streets below.

The bottom of the pipe brings me out in the upper reaches of the Sump level. Things aren't so nice here. Lots of people don't have much of anything, and there's plenty who want to take even that from them. The sump pools, full of toxins and runoff from the chem-forges, remind me of the time I spent alone as a specimen in a laboratory. I try not to think of that time, because it makes me angry. And when I get angry I sometimes break stuff, even though I don't mean to. I don't like feeling like that, so I ease myself into my favorite cleft in the rock, the one running beneath the twisting rookeries of the Skylight Commercia. It's always nice there. People out together, browsing the galleries, meeting friends, dining or going to see one of the companies of players that tour the undercity with their satirical works. The atmosphere warm and friendly, it's the perfect place to bask in all that Zaun has to offer.

But as I pass beneath the outlying streets, a spike of anguish ripples through me. A tremor of fear and pain disturbs my liquid flesh. I don't like it. It feels out of place, like something I'd expect to find deeper down in the Sump. That's the place where bad things happen more often than good things. It shouldn't be happening here! I get angry as more of the bad feelings soak into me. I follow them down, wanting to stop them from spreading.

I push my body from the corroded pipes running below a metalsmith's shop. My bulk fills the space under the warped floorboards. Light shines in angled beams through the louvers of a grille set in the floor. Angry voices come from above. Shouts and the sound of a weeping man. I press my body against the grille. My gelatinous mass breaks apart, only to reform on the other side. I push hard and quick, re-establishing my form inside the shop.

The owner of the shop is on his knees beside a woman who bleeds from a deep wound in her belly. He kneels at her side, one arm outstretched toward the four men standing in the wreckage of his shop. I know these kinds of men. I see them all the time in the Sump; thugs who force good-hearted people to pay up or face seeing their livelihoods smashed.

The interior of the shop is lit by chem-lanterns, one of which is held by a man wearing a butcher's apron and who has a meat-hook crudely fixed to the stump of his other hand. The other three are mere brutes, slab-muscled simpletons in canvas overalls and thick magnifier goggles. Their eyes grow stupidly wide with shock at the sight of me rising over them. I bloat my body, greenish limbs swelling with power as I form a mouth where I think it ought to be.

I want to really hurt these men. I know it's their emotions I've been feeling, but I don't care. I just want to hurt them as badly as they hurt these people.

arm shoots out, smashing the first thug from his feet. He slams into the metal stanchion by the door and doesn't get back up. A second thug swings a heavy iron club, a sump-scrapper's oversized wrench. It hits me in my middle and is promptly swallowed by my pliant flesh. I reach down and pluck him from the ground, hammering him up to the latticework girders of the ceiling. He drops back down, his limbs bending in ways even I can tell they shouldn't. The third thug turns and runs, but I reach up and stretch my arms toward the girders. I spring forward and hammer my feet into his back. I squash him to the ground as their leader slices the blade of his butcher's hook down the center of my back.

It hurts! Oh, how it hurts. The pain causes my body to lose cohesion. I fall to the floor in a shower of liquid green ooze. For a moment, I lose all sense of spatial awareness, seeing and feeling the world from a thousand different perspectives. The thug stands over me, a gap-toothed smile splitting his stupid face. He's glad he killed me, filled with pride at his destruction of a living thing.

His pleasure at this destruction courses through me like a hateful elixir. I don't want to feel like this, it's not what I was taught, but to help these people I need to use the wrath that fills me. I must turn it against these men. My scattered

globules reform in the time it takes him to realize he hasn't killed me as thoroughly as he thought. I surge from the floor and crash into him, altering my density to that of a thundering piledriver. We smash into the wall of the establishment, the flesh and bone beneath me disintegrating at the force of impact.

I peel myself from the bloody wall, feeling the anger slowly drain from me. I form my body into something man-shaped as I feel the mixed emotions emanating from the couple behind me. The man looks at me with a mixture of fear and trepidation. His wife smiles at me, though I can feel her tremendous pain. I kneel beside her and she takes my hand. It is soft. I am immediately soothed by her gratitude.

I nod and place my hand on her stomach. Heat spreads from me as I ease a sliver of my form into her wound. I'll be leaving a piece of me behind, a piece I'll never grow back, but I give it willingly, knowing she will live because of me. The portion of my body within her repairs damaged flesh, knits ruptured tissue and stimulates regenerative growth in her stomach lining. Her husband wipes his hand over her wound, and gasps to see her skin is pink and new.

I do not answer. I cannot. Expending such power drains me, leaves me thin. I allow my cohesion to loosen, flowing back down the grille and into the pipes. It is all I can do to maintain my form as I pour down through the cracks in the rock, heading toward the places I know will be awash with good emotions. I need to renew myself. I need to feel all the good Zaun has to offer.

I need to feel alive.

I need to feel.

Lore and Events
Retrieved from "https://leagueoflegends.fandom.com/wiki/Protection?oldid=3088686"
Community content is available under CC-BY-SA unless otherwise noted.