League of Legends Wiki
Register
Don't have an account?
Sign In
Advertisement
in: Lore of Noxus, Short Story, Darius lore,
and 2 more 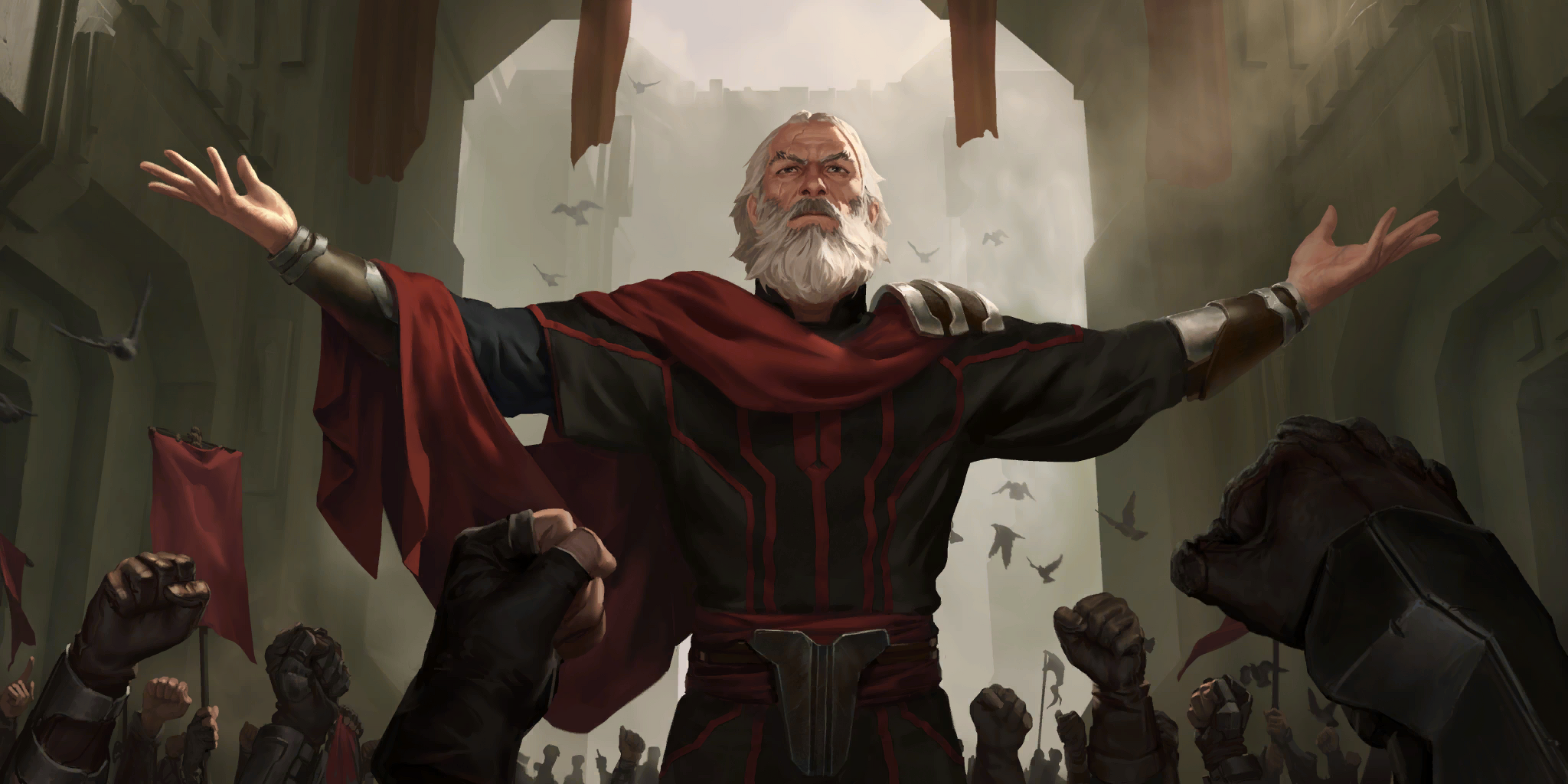 Citizens of Noxus, I bring word from the capital!

Noxus, I bring word from the capital!

It is a time for celebration!

The Hand of Noxus is returned, and stands with our new

Grand General! With the noble houses united behind them, the new age of our glorious empire begins now!

Let it be known that, on this day, from distant

Shurima to the shores of

Ionia, the countless wars initiated by Boram Darkwill have been ended. No longer will our treasuries be drained in pursuit of victories that none can truthfully promise. No longer will our brave warriors spend their lives needlessly, and without gain.

Noxian gold, and Noxian blood. These are the treasures that Jericho Swain has pledged to return to you, the people.

While on campaign in the northlands, mighty General Darius received orders to stand down. Rather than meekly accept this edict, he marched back to the capital with all his warhosts—for the duty of the Hand of Noxus is first and foremost to the empire itself, and not to whomsoever shall sit upon its throne, with the passing of years. It is right and proper that he would question these orders, and the authority by which they were issued.

Let it be known that General Darius met with General Swain. Let it also be known that Darius was satisfied that the coup against Boram Darkwill was just, and legal, and that Swain’s intentions were for the good of all Noxus.

Under the protection of Darius and his warhosts, representatives from all noble houses have met to hear Swain’s plans for the future of Noxus. Those who have sworn themselves and their houses to him in perpetuity have received full pardons for any prior wrongdoing, or opposition they may have offered. These men and women are proud and honorable servants of the Grand General, and are not to be harmed.

In his boundless wisdom and mercy, he has also granted clemency to those who refuse his benevolence. They have a full seven days to conclude their affairs within the empire, surrender their lands and titles, and depart Noxus forevermore. Any who choose to remain in defiance will forfeit their lives, with public Reckonings to recommence in the Noxkraya Arena three days thereafter.

Henceforth, let it be known that each and every Noxian shall be treated equally, and on the merit of their own ability and strength. Furthermore, let it be known that Jericho Swain and the noble houses are committed to ending the decades of incompetence and nepotism that plagued Darkwill’s rule.

But the former Grand General was not an evil man, and Swain would not have him remembered as such. Rather, he was a weak man—manipulated from behind the scenes by others...

Yes, friends. There is a corruption at the heart of our great empire. For centuries this corruption has grown, blooming like a

pleasant flower in plain sight, while its roots twist and spread in the darkness beneath.

No more, friends! No more! Jericho Swain will destroy any who seek to exploit Noxus for their own secretive gains! He will tear out this corruption, this blighted and thorned rose, root and stem! Every one of its agents and allies are hereby named enemies of the empire, and all good citizens are obliged to do them harm, if they are able. Together we shall prevail! Let none be above suspicion!

Before Boram Darkwill, these same sinister forces puppeted even the greatest kings and champions of the Noxii, all the way back to the Rune Wars. Indeed, our beloved Grand General has heard the fears of the noble houses—that if any could fall to such corruption, then why not him also? To that end, henceforth he has decreed that Noxus shall not be ruled by any single individual... but three. He draws upon the legacy of the greatest among the old tribes—the vision of the Noxidi, the might of the Noxkri, the guile of the Noxtali—to create a “Trifarix” council, whose members will eschew any throne, and embody those same principles of strength that have ever allowed Noxus to triumph over its foes.

Finally, let it be known that after much consultation with his dear friends among the nobility, the Grand General has reconciled with the leaders of the assassin guilds. Alongside Swain and Darius, they will find a place on the council prepared for them, maintaining a “faceless” representative to protect the empire against even the most insidious threats from within.

Go forth, citizens! Carry these words and proclamations to all! The greatest years of Noxus lie yet before us, and we shall rise as a single people, united in purpose and glory, once more!

ARCHIVIST’S NOTE: In spite of the inspirational and conciliatory promises contained in these official pronouncements, within a single year the Trifarix had completely changed the political landscape of Noxus. Imperial governorships and military commissions were no longer inherited, but bestowed through official channels. All personal wealth was to be declared and verified, and hefty taxes imposed on any gold or silver not held in trust by state banks. Finally, it became illegal for any citizen to be owned as chattel by another, and unauthorized sale or transfer of the same was made punishable by death.

Effectively, Jericho Swain courted the noble houses to gain a foothold within the assassin guilds, then systematically dismantled the power structures that had supported them for almost a thousand years. Though the full repercussions of this remain to be seen, it is likely that many nobles have been driven into alliance with his clandestine enemies, and eventual rebellion.