Priscilla, the Spider Queen is a cancelled League of Legends Champion.

Elise (originally Nidalee, and then Priscilla) was first in development back in 2009, but did not make it through the development phase[1]. For years to come, her artwork and spell icons would remain in the game files.

While her original name was later used by

another champion, it was confirmed by Coronach that there was no other relation[2]. It has been speculated that Priscilla's silhouette may have inspired

Priscilla's Blessing, an item released with the launch of Dominion in September 2011, was named in homage to the Spider Queen, although the item was removed shortly after.

There was a poll on the League of Legends forums petitioning for Riot to bring the Spider Queen into the game, which received over 24.000 votes[3]. She would later be reworked into

The presented information is extracted from Closed Beta 1 (25-Mar-2009) There are minor wording adjustments for this presentation.

Active: Priscilla lobs a sticky, silky net at a small area. Enemies caught in the web are

immobilized for a moment as she drags them back toward her over 1 second, dealing 1.25 damage per distance moved.

Passive: Priscilla's basic attacks inject the target with a poison,

If the target dies while injected, it spawns a Spiderling per Injected stack from its dead corpse, which last up to 60 seconds. A Spiderling has 340 hit points, 0 armor, and deals 20 damage.

pins her target down for 2.75 seconds with her back two claws, and slashes it rapidly with her front two claws, dealing damage every 0.25 seconds.

Priscilla does not have a unique voiceover. The below quotes belong to original

Evelynn. It is likely they were used during Priscilla's development as a placeholder for her proper voiceover at a later date, which due to her cancellation never came. 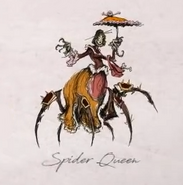