League of Legends Wiki
Register
Don't have an account?
Sign In
Advertisement
in: Lore of Demacia, Lore of Targon, Short Story, Morgana lore 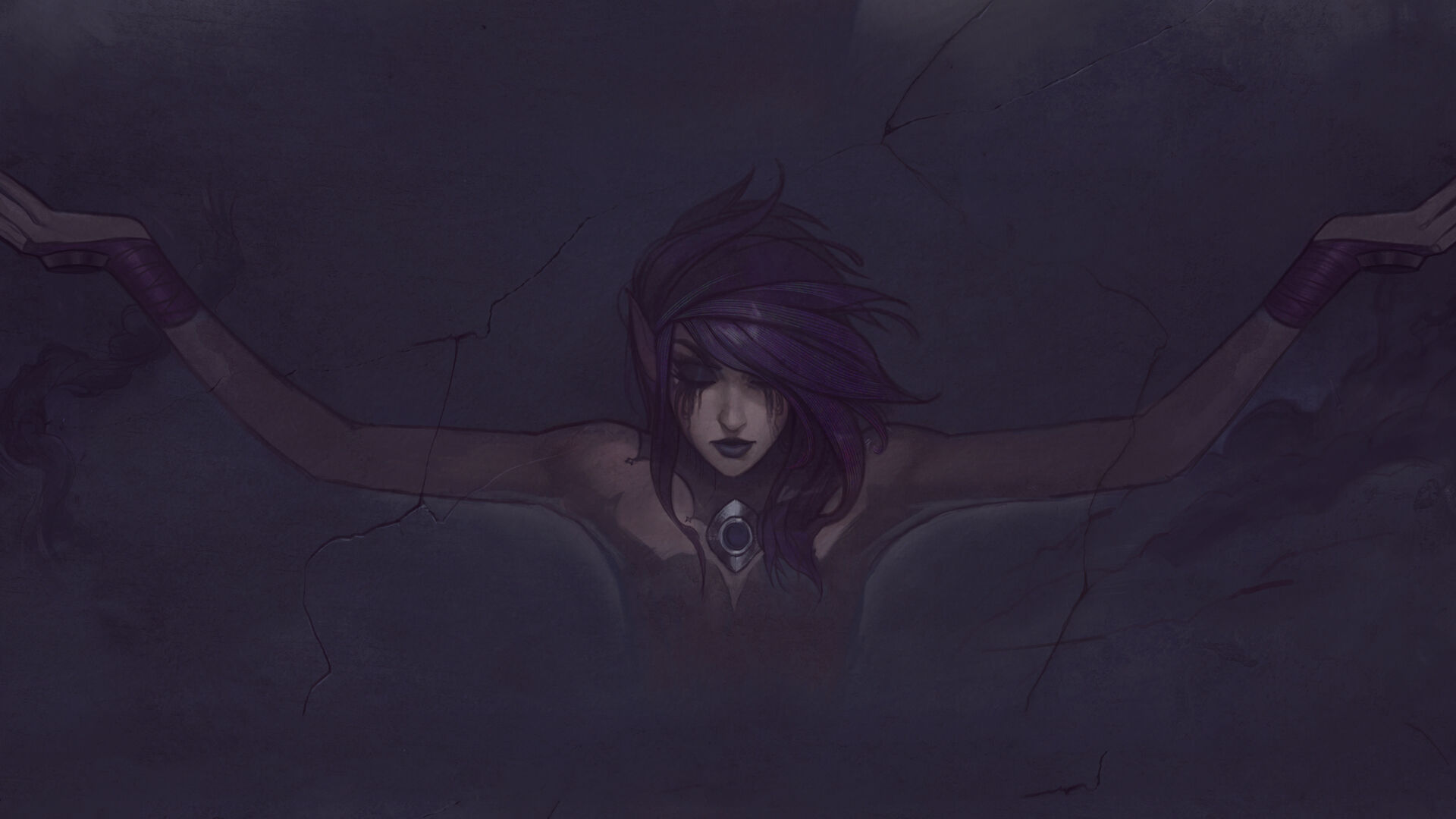 Guilt can teach many things to a heart humbled by intent.

Rin stubbed his toe on a root and stumbled, catching himself before he lost his balance. A few paces in front of him, his great aunt looked back.

“Need my old bones to slow down for you? Ho ha!” she chuckled.

“No,” he murmured to his shoes. His great aunt Peria was snow-haired and stooped with age, though she was still a few inches taller than Rin. He wished he could be as tall as his horrible brother—he would have towered over both of them if he was there.

Rin had never been in this part of the woods before. The pine trees grew closer together, so much that the light of the noonday sun had diminished to a glimmer amongst the shadows.

Aunt Peria stopped ahead. At first, he thought she stood in front of a mossy boulder, but as he caught up he saw the remains of a stone figure, eroded by time. Rin fiddled with the rocks in his pocket.

“Aha! Do you know who this is?” asked Aunt Peria.

“Uh, some old noble from the city?” said Rin.

“Oh no!” said Aunt Peria cheerfully. “To many, she was no more than shadow and myth. A figure known as the

Aunt Peria lifted her lantern up toward the figure. The statue’s left arm was missing from the shoulder, but her right palm was open, as if inviting them forward. Upon her head was what must have once been a delicate stone shroud, now coated in vines. Feathered stubs rose from her shoulders, broken and weathered. Rin could see that part of her face had crumbled garishly, and he shivered. The unbroken half of her face was not much better—her remaining eye was marked with stains, and her expression was spiteful, as if she was about to spit out sour milk.

“Don’t like her?” Aunt Peria said, amused. “You are not the only one. She is not the most beloved. But she knows all about revenge.”

Rin’s eyes widened. He thought he’d been so careful.

“Yes, yes, I heard the rocks clacking around your pocket,” said Aunt Peria. “I know you’re planning to get back at your brother. He didn’t mean to hurt you, you know.”

“He hit me in the eye with the blunt of his axe!” Rin cried. “What do you think he meant to do? Shouldn’t he be the one who gets a lesson?”

“He was showing you where to chop wood. You know he would never hurt you on purpose,” said Aunt Peria.

“He deserves his own black eye!”

“And if you gave him one, what lesson do you think he would learn from that, hmm?”

Rin did not think Aunt Peria would much like his response, so he stayed silent.

Rin sat himself down in front of the statue. With a sigh, he leaned his head against his hand.

“Long ago, in the deepest, darkest woods, where the trees grew together so tightly no sign of the sky or stars was visible, the Veiled One lived, far away from any settlement. Though few spoke with her, it was believed that she was older than dawn, sharper and wiser than any in the land. Those with disputes they could not solve themselves would come to her for final judgment, to seek wisdom, absolution—and occasionally, punishment. But they did so with caution, for it was also known that her lessons could be severe.

“One day, a Cleric and his Pupil entered the woods to find the Veiled One, for the Pupil had erred. The Pupil had acted in anger against his elder, striking him with a censer. Smouldering incense had scarred the Cleric’s face with a grotesque burn. The Pupil knew he done wrong and wanted to repent.

“The two had journeyed a day and a night before they found the Veiled One.

“They entered a cavern illuminated by candles. Water dripped from the ceiling, and strange potions lined the walls. It stank of gravesoil and moss. Dozens of raven-black feathers littered the floor.

“A figure silently emerged from the shadows to meet them—the Veiled One. A black shroud hid most of her features from sight, but her eerily violet eyes shone through. Her feet were bare on the cold stone floor. As the Pupil told his tale, she gazed at him with an unbroken stare.

“‘I see that your actions were no accident,’ spoke the Veiled One at last. Her voice, though rarely heard, was barbed like a thornbush. ‘You acted with purpose and certainty. And yet, now you feel much pain at having hurt your master.’

“‘Aye, I wish to atone for my sins so that I may rid myself of this guilt,’ he said.

“‘Guilt can teach many things to a heart humbled by intent. Why did you strike your master?’ she asked.

“‘Perhaps. What caused your anger?’ asked the Veiled One.

“The Pupil looked to his Cleric, and cast his eyes down.

“‘In my foolishness, I sought to end his lesson to another student,’ said the Pupil.

“‘And what was that lesson?’

“Before the Pupil could answer, the Cleric interrupted.

“‘My students require instruction in myriad ways,’ he said. ‘I teach them manners, patience, and restraint. If I must, I will use the lash. I do not enjoy it—these lessons are my sacred duty.’

“The Veiled One peered at the Cleric. Behind the shroud, her eyes seemed to bore into him.

“‘Tell me, scarred master, are your lessons truly for the good of your students? Or do you punish them to relish their suffering?’ said the Veiled One.

“The Cleric raised his hand and struck the boy.

“‘I don’t need your lying breath to defend me,’ spat the Cleric, his scarred face vivid with anger.

“The Veiled One opened her palm and

chained the Cleric to her with dark fire. The bindings glimmered with immaterial violet light, but the Cleric could not break them as he struggled.

“‘You came to me for another’s punishment,’ she hissed. ‘But you ignore your own sins. Your sick pride swells as they come back to you, Cleric. Since you refuse to look yourself, I will make you feel the pain you caused.’

“Through the chains that bound them, the Veiled One forced him to endure all the shame, suffering, and loneliness he had inflicted on his pupils. For an instant, the Cleric’s heart stopped, as a great weight he had never known constricted his very soul. He fell to his knees, fixed in place by bitter torment, as shadowed flames licked his flesh.

“‘Stop, please stop!’ the student cried. ‘Please, punish me in his place. He has suffered enough!’

“‘You defend him, even now,’ said the Veiled One. ‘The wretch has much to learn ere death's mercy lays claim. He alone must feel the pain he caused so he may never hurt another. You came here seeking understanding—its burden is now yours to bear.’

“The Pupil did not show his face at his cloister for many days. But when hunger and fatigue overcame him, he finally forgot his fear of his master’s lash. Upon his return, he found the Cleric a different man. Where his elder had been cruel and uncaring, he was patient and gentle. For though the burn on his face had not yet healed, the Veiled One’s lesson had cut far deeper.”

Aunt Peria set her lantern at the base of the statue. Half her stone-gray face was lost to darkness, with flickering shadows running down her shroud like tears.

“Be careful, Rin, when wishing for punishment. Can you teach a lesson that will make your brother a better person? Even if he did hit you on purpose, there is no sense in you punishing him selfishly.”

Rin felt the rocks in his pocket.

“I guess my brother did say he was sorry. After I fell down from getting hit in the eye,” he said. He begrudgingly dropped the rocks to the forest floor.

“Wonderful! Let us give thanks to the Veiled One.”

Aunt Peria opened her lantern and blew the candle out.

“Remember—revenge is an act of pride, but teaching is selfless,” she said. “In case you forget, I’ll be watching you! Ha! And the Veiled One might be, too!”

Rin watched the smoke curl and unfold around the statue’s empty stone eye, shrouding the figure in shadow. When he looked back, Aunt Peria had set off through the trees, back toward the village. Rin hurried to catch up.