< Poppy
View source
watch 02:52
Roblox: DeepWoken - The Loop
Do you like this video?
Play Sound 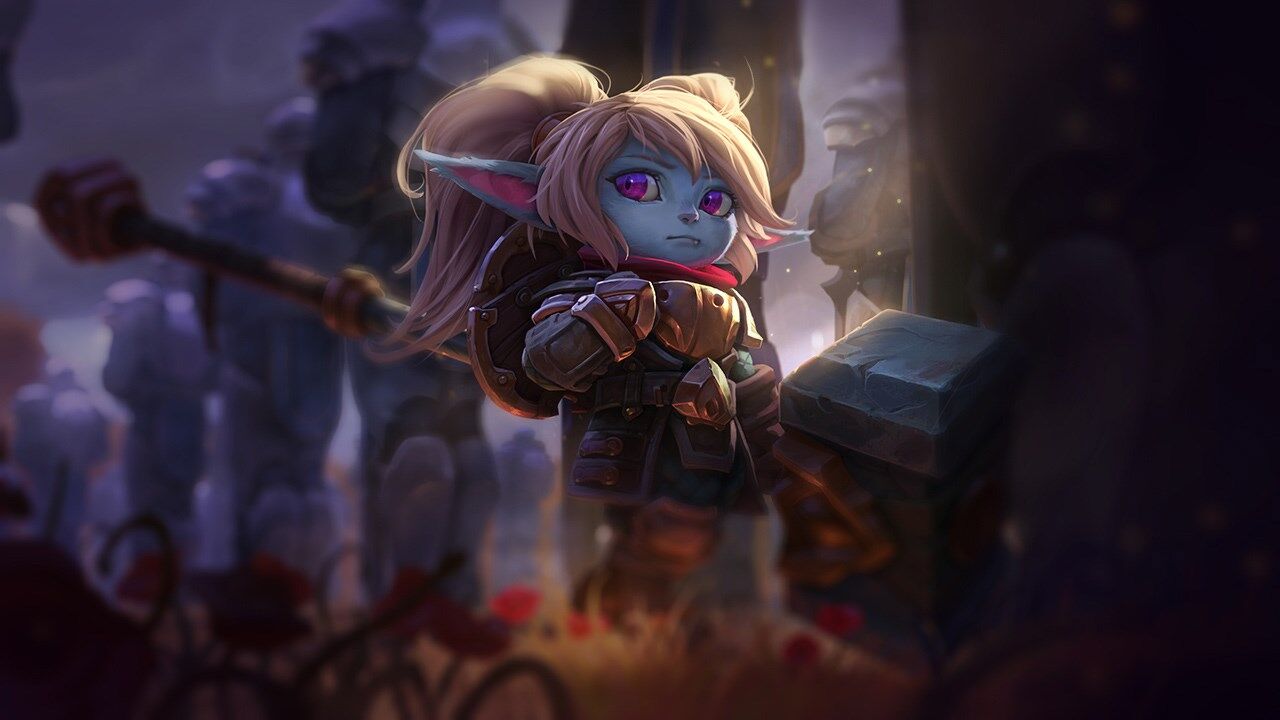 Keeper of the Hammer

Poppy is a champion in League of Legends.[1]

throws her buckler as her next basic attack, gaining

350 bonus range and dealing 20 − 180 (based on level) bonus magic damage. The buckler then falls near the target after hitting, landing on the ground after 1 second, where it remains for up to 4 seconds.

When Poppy picks up the buckler, she

15 / 17.5 / 20% (based on level) of her maximum health for 3 seconds. If the buckler kills its target, it bounces back to Poppy automatically. Enemy

champions can step on the buckler to destroy it.

Active: Poppy smashes the ground in front of her in the target direction, dealing physical damage to all enemies struck within. Against

monsters, the damage based on their maximum health is capped.

The impacted ground then becomes unstable,

slowing enemies within before erupting after 1 second, dealing the same physical damage to all enemies inside.

total magic resistance are both increased by 10%, doubled to 20% when she falls

40% bonus movement speed for 2 seconds and generates an aura around herself for the duration, causing all enemies who attempt to

dash into or within it to be dealt magic damage,

knocked up for 0.5 seconds and, if they were successfully interrupted,

Steadfast Presence can only block a single dash per enemy per cast.

dashes to the target enemy's location and, if they are in range upon arrival, she deals them physical damage and

carries them along with her for up to 400 units.

If the target collides with terrain, she deals them the same physical damage again and

stuns them for a duration.

knock back distance over 0.5 seconds after the first 0.5 seconds of the channel. Keeper's Verdict can be recast at any time within its duration.

Recast: Poppy releases the charge with a 0.25 seconds cast time, launching her hammer upwards to deal physical damage to all enemies in a radius around her and in an area in front of her and

knocking them up for 0.75 seconds.

If Poppy charged for at least 0.5 seconds, she smashes the ground, causing Keeper's Verdict to deal increased damage and

knock back its targets a massive distance towards the enemy team's fountain. If no enemies are within the uncharged hitbox, the slam creates a shockwave instead that travels in the target direction until it collides with an enemy

champion, causing a hammer to erupt. Enemies hit by the shockwave or the hammer's eruption receive the empowered effects.

interrupted during the charge, or the charge completes without reactivation, Keeper's Verdict is canceled and the ability is put on a 30-second

revealed and are rendered

untargetable while being displaced if Poppy charged Keeper's Verdict for more than 0.5 seconds. 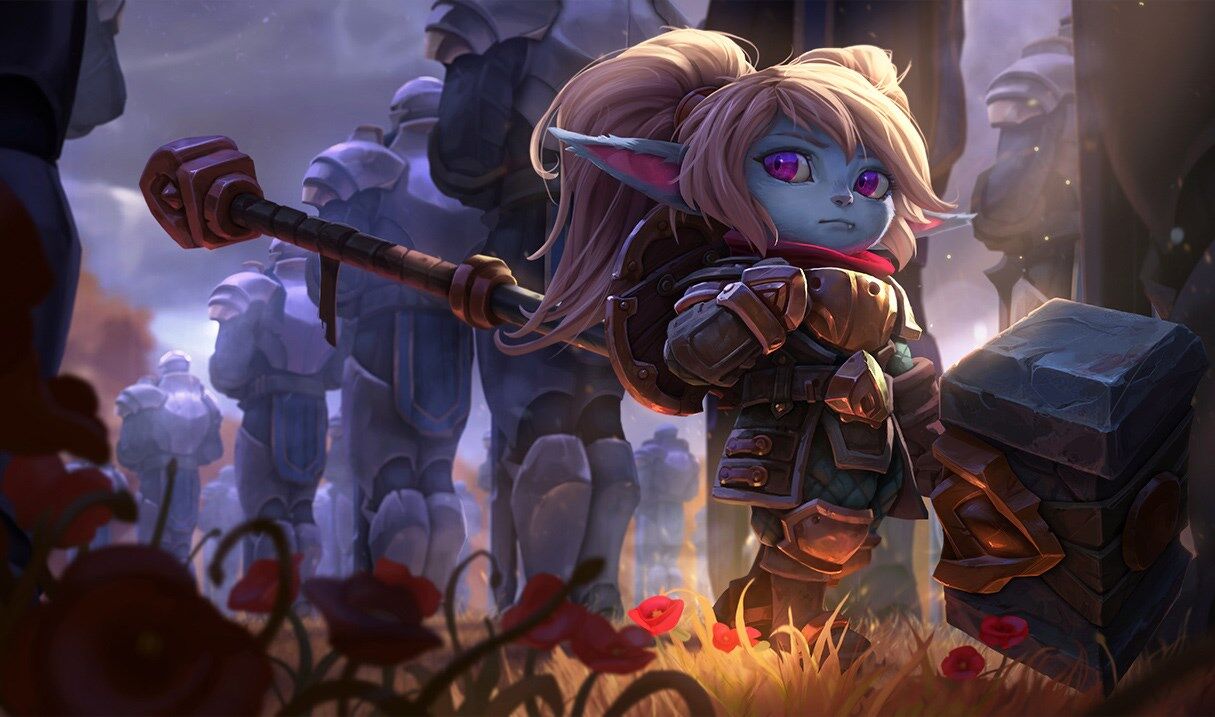 260
13.01.2010
Runeterra has no shortage of valiant champions, but few are as tenacious as Poppy. Bearing the legendary hammer of Orlon, a weapon twice her size, this determined yordle has spent untold years searching in secret for the fabled 'Hero of Demacia,' said to be its rightful wielder. Until then, she dutifully charges into battle, pushing back the kingdom’s enemies with every whirling strike. 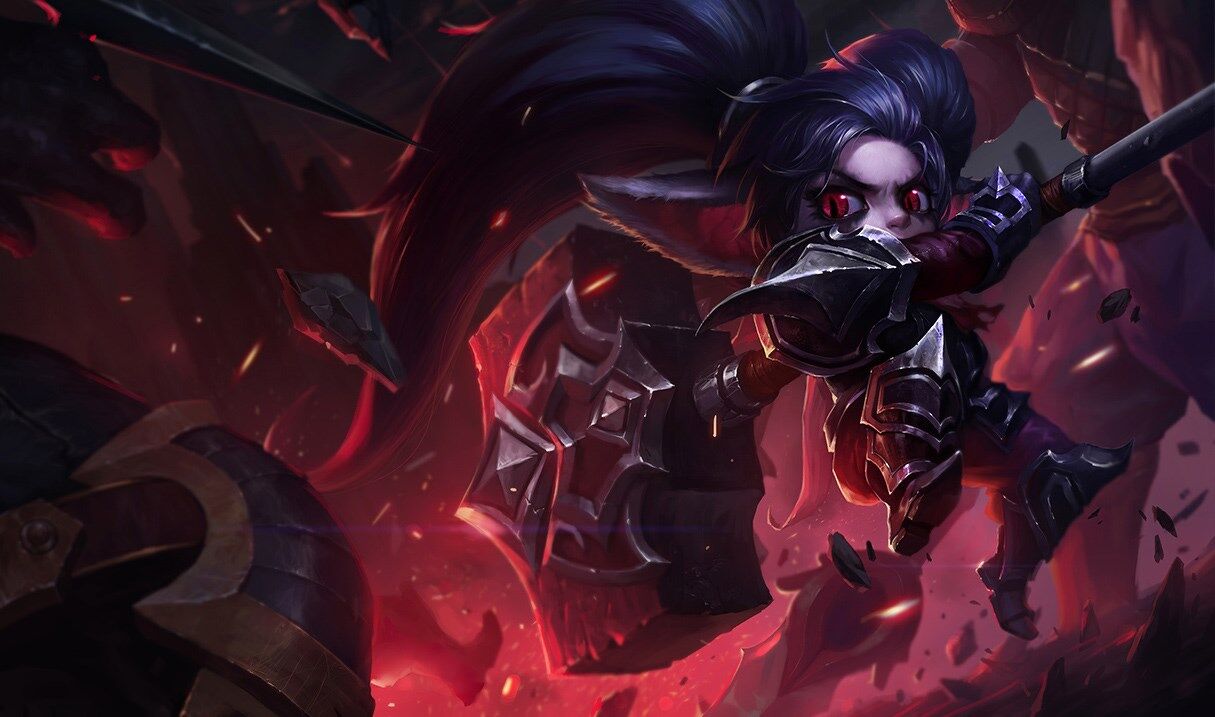 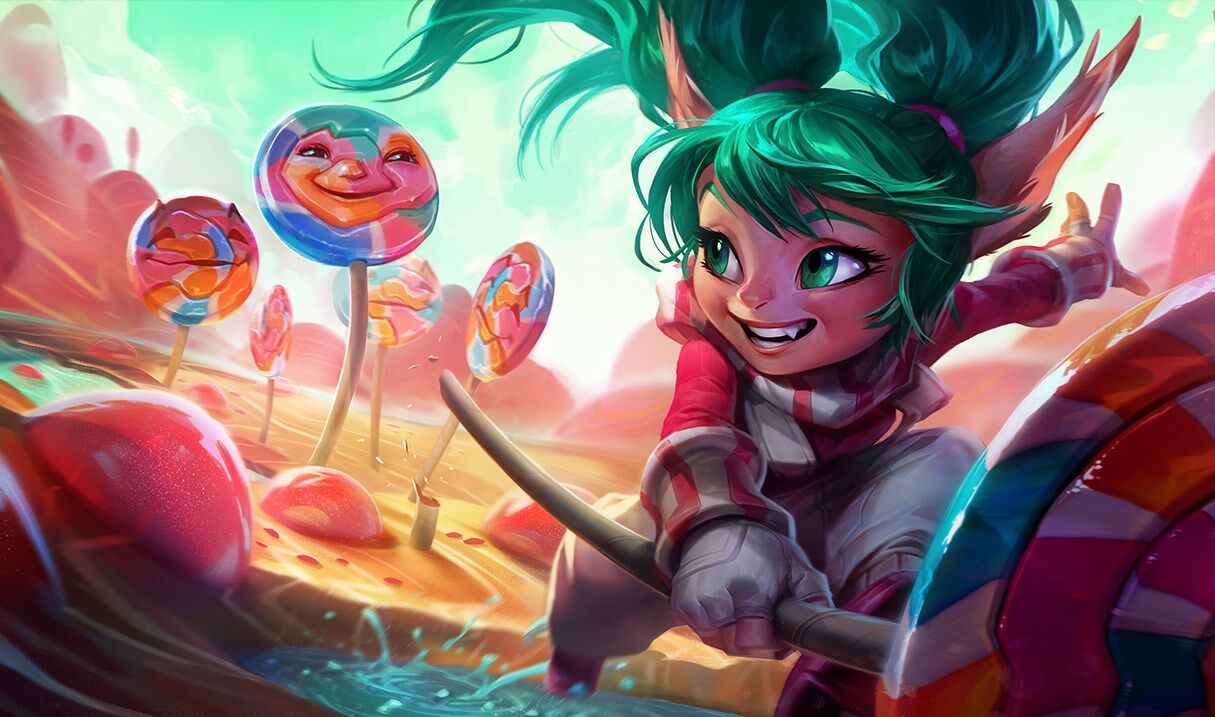 975
19.10.2010
Lollipoppy is a legend to the people of the Candy Kingdom. Everyone remembers her face. Everyone. 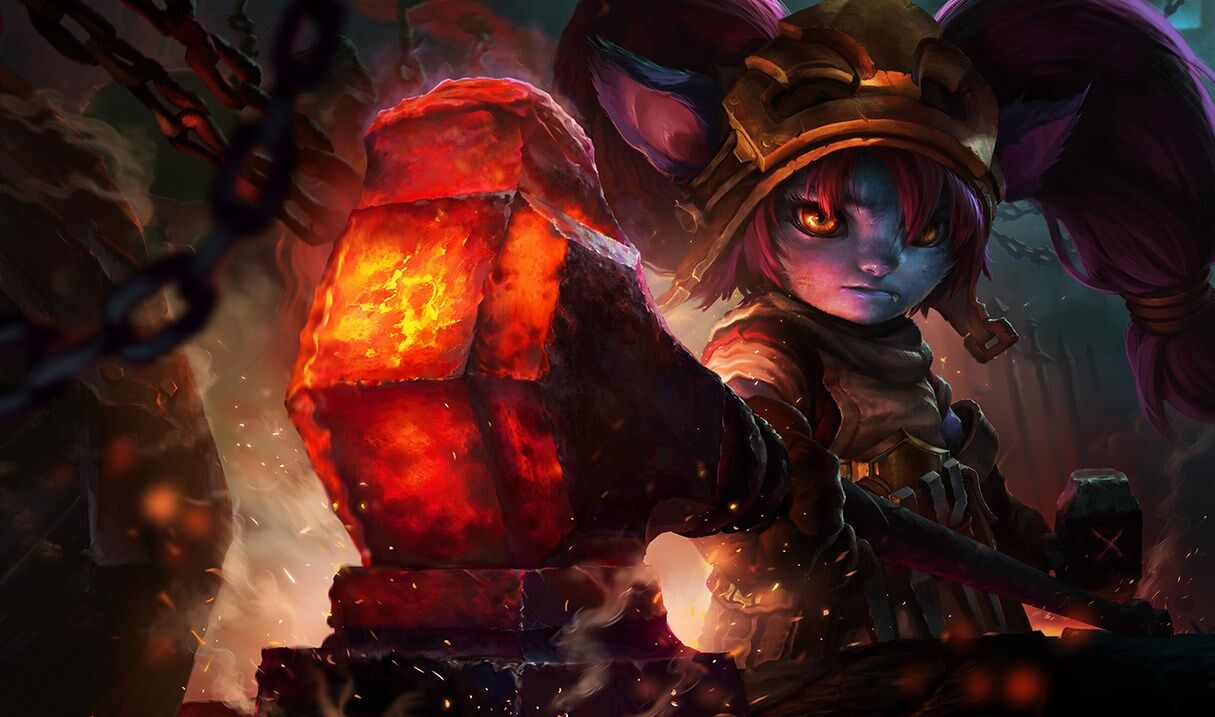 975
24.08.2010
A famously gruff blacksmith working under the tutelage of Sir Ornn of the Freljord, Poppy wields a hammer imbued with a powerful magic that she believes is destined for the weapon for an unknown hero. Little does she know the hammer is the weapon, and the hero… is herself. 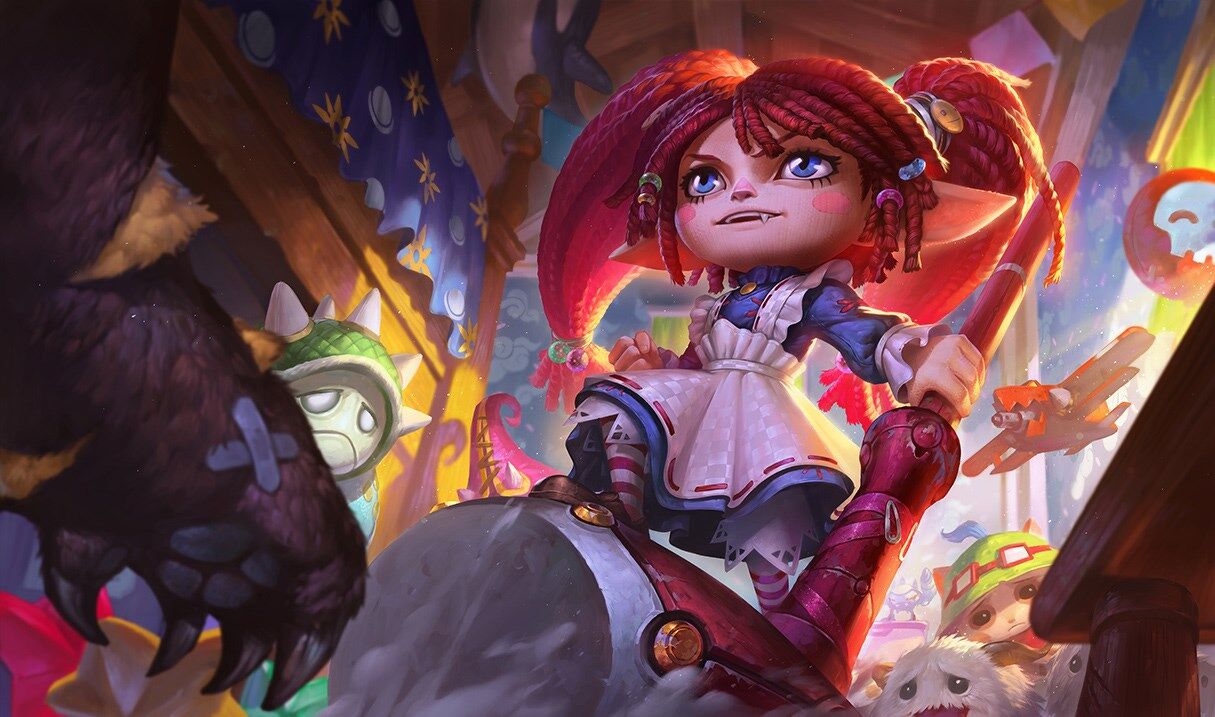 975
14.12.2010
Once an innocent cloth doll, Poppy watched helplessly as toy soldiers knocked over her peaceful block village. Now she leads her people to war, their cotton hearts filled with vengeance. 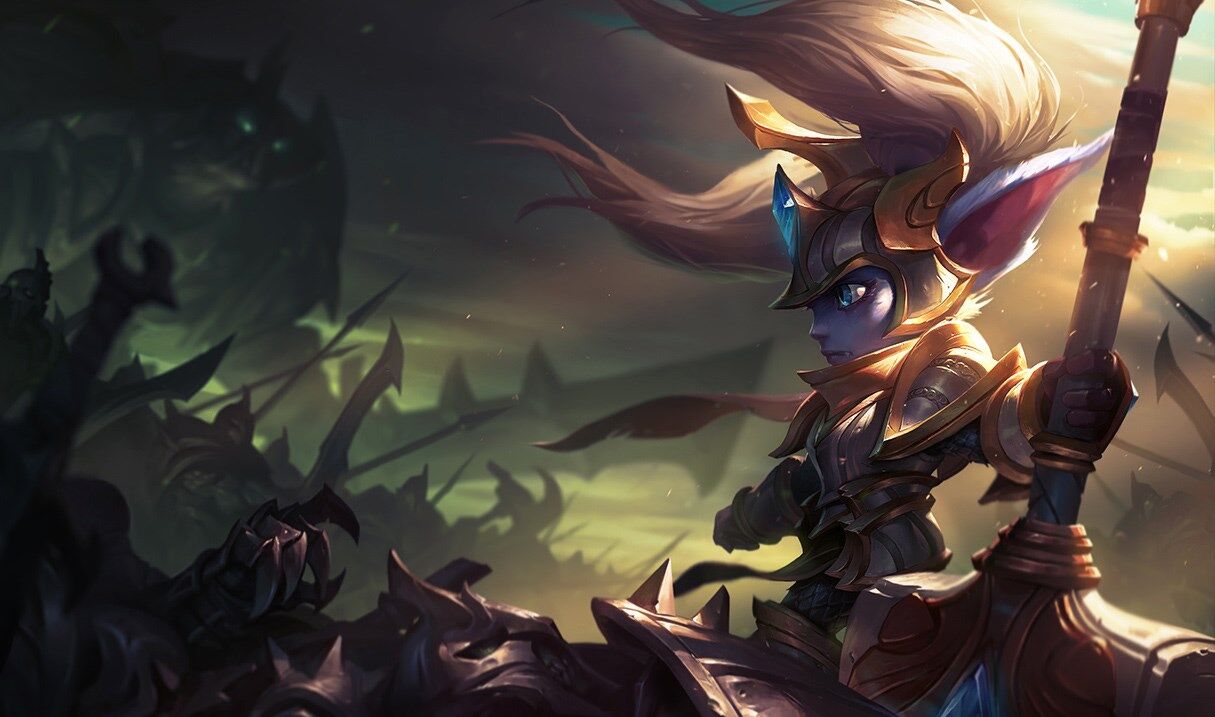 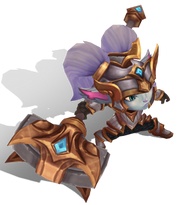 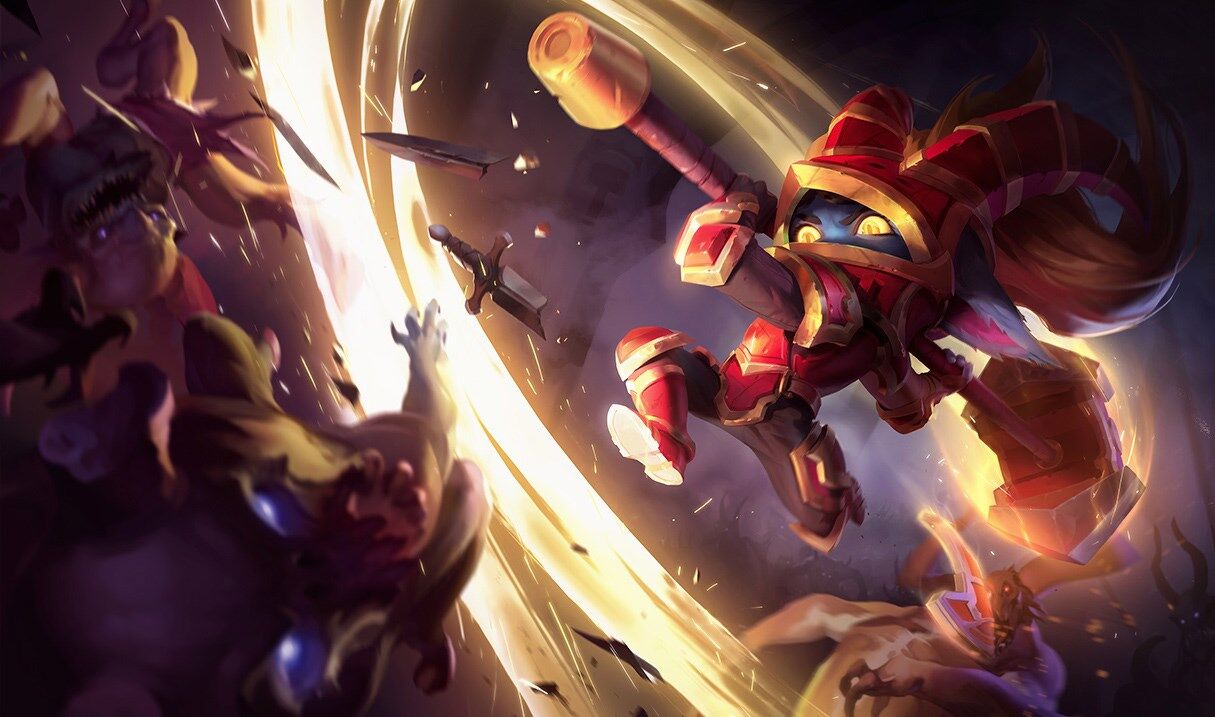 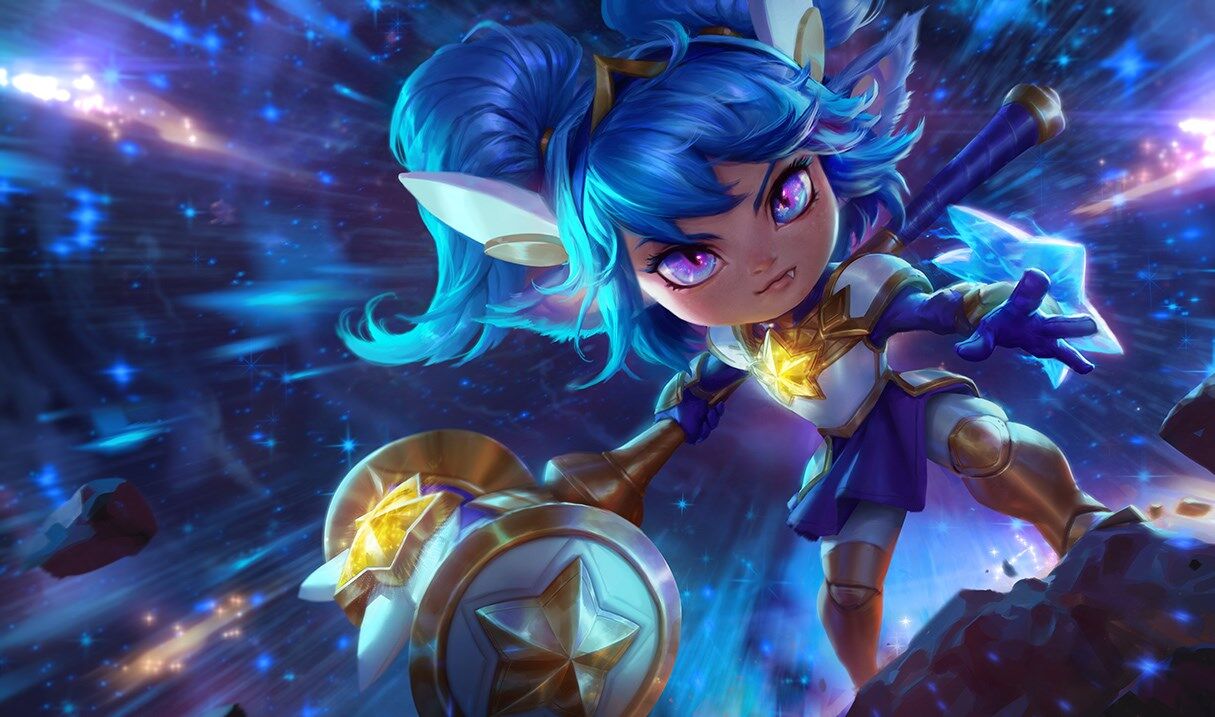 1350
05.10.2016
Fierce and no-nonsense, Poppy is often the first Star Guardian on the battle lines, ready to put her duty before everything else. With her trusty hammer, Poppy sees the universe as black and white: you're either here to smash anything that threatens the sanctity of the cosmos, or you're getting smashed. 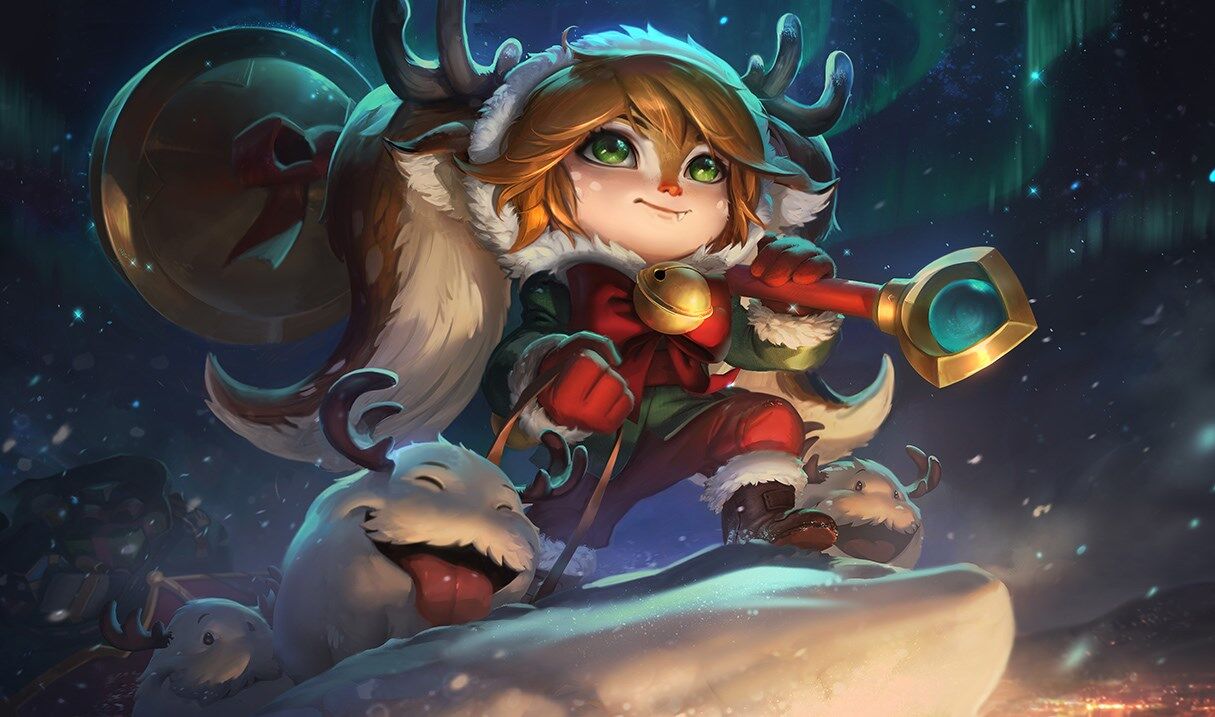 1350
12.12.2017
The Poro King's right hand and loyal shield, Poppy enforces her furry liege's decrees and protects him from all harm. She also enjoys Snowdown festivities, a holiday she discovered on one of her many colorful adventures. 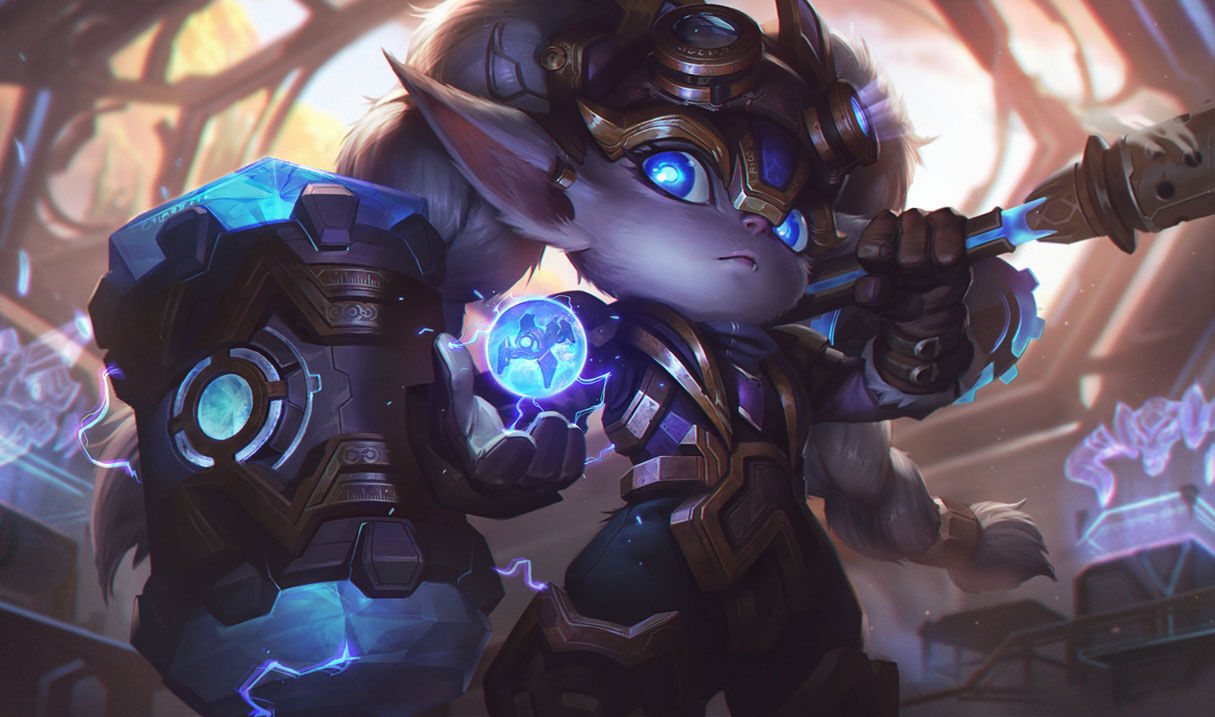 Hextech
View in 3D
Special
23.07.2018
Artificers of the Hextech renaissance owe much to Poppy, an expert engineer of the delicate craft. Having perfected the infusion of life into the inanimate, she now feverishly researches the ultimate scientific breakthrough—the creation of an artificial soul. 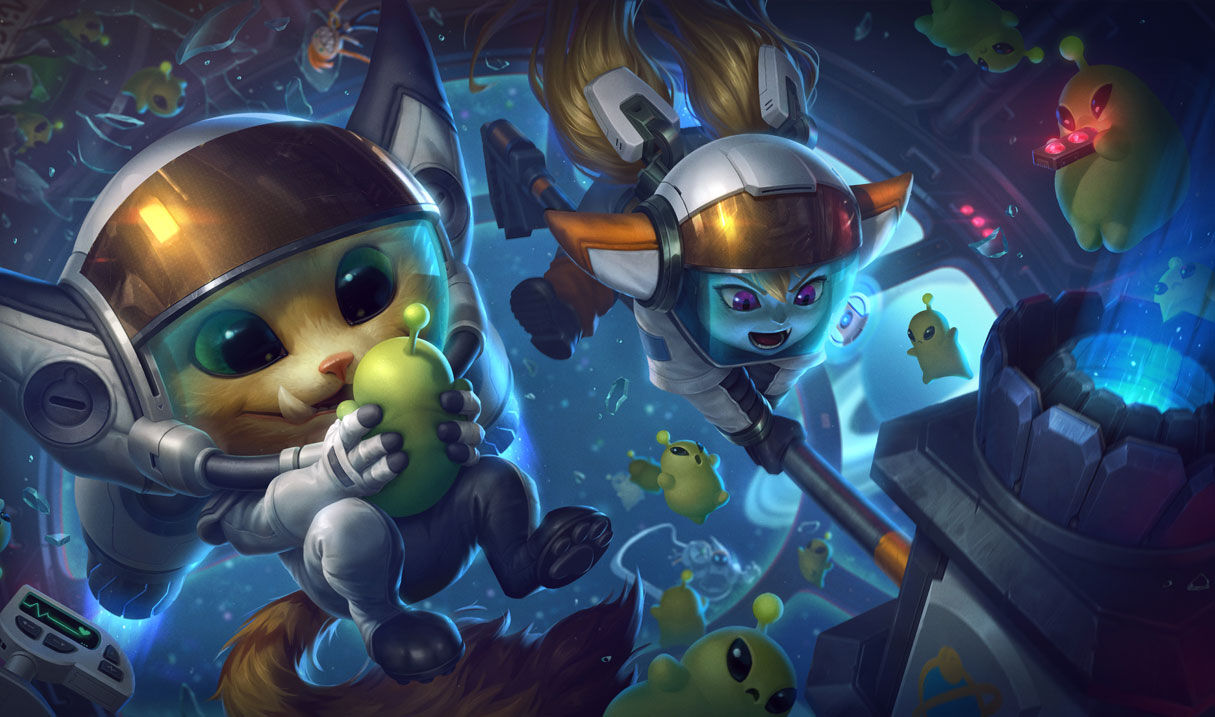 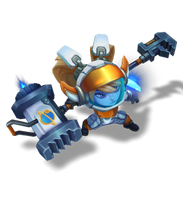 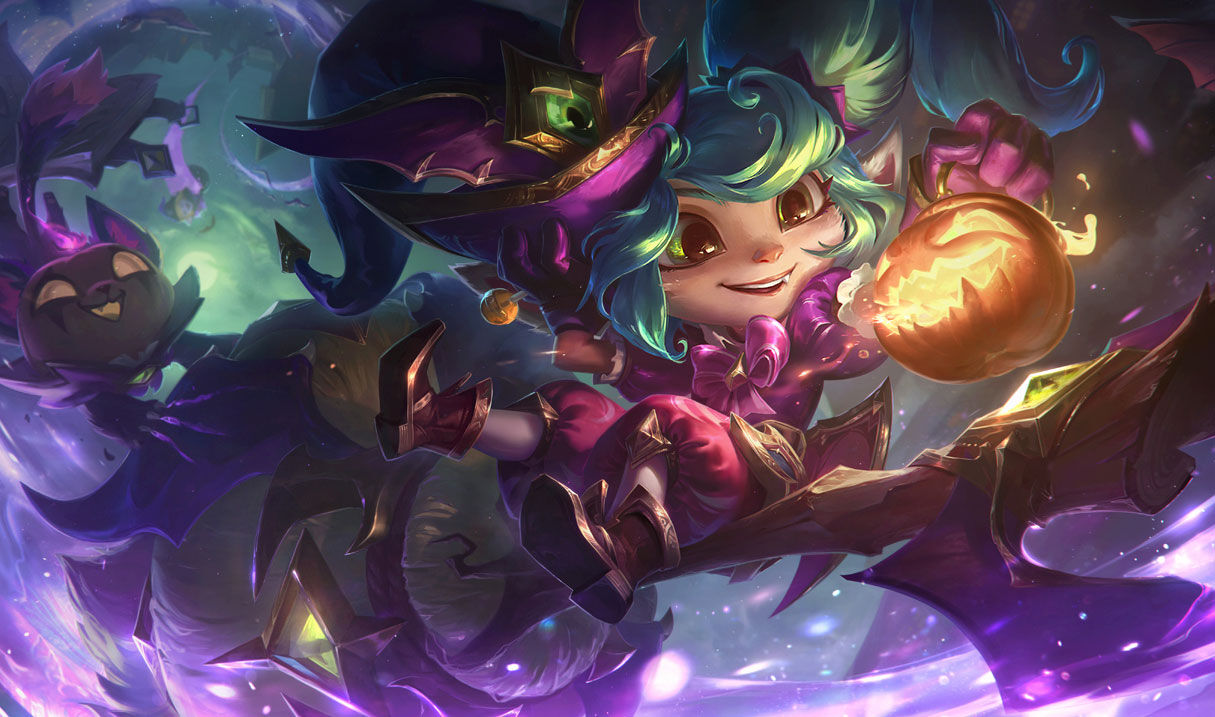 1350
07.10.2021
Poppy leads the trick-or-treating charge. She's always the first to arrive, even at particularly creepy doorsteps, undaunted by whatever frightening spectre—or delicious treat—lies on the other side. 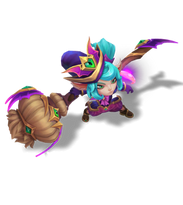 Poppy, Keeper of the Hammer