Palclyff is a coastal city-state in western Valoran. It closely borders both Demacia and Noxus 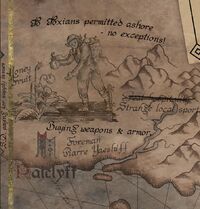 Palclyff is a sought after trade city with great hospitality (except for Noxians) and strange local sports.

Honeyfruits are a type of edible plant seen harvested near the city of Palcyff. Its healing properties are also used for medicinal purposes such as

Health potions. Being a semi-aquatic plant, it can be seen on the shores of rivers, lakes, and other bodies of fresh water.

Demacia has long protected neighboring city-states and nations from onslaught of invading armies such as Noxus. In compensation they are used as buffer states between larger nations and Demacia. Some Demacian traveling actors frequently visit perform in Palclyff.

As indicated by the Clan Medarda map, No citizen of Noxus is permitted to set foot on the shores of Palclyff and no exceptions are made. This is due to Noxus invading and annexing neighboring city-states and nations.

Piltover trading families have close trading ties with the city-state nation of Palclyff, such as Clan Medarda with Foreman Piarre Yaeshiff. One of the nations more well known exports to Piltover are weapons, armor, and