One for All was a limited time game mode in League of Legends. Players battle in a 5v5 match in Summoner's Rift map similar to Classic mode, with the only difference being that all champions on each team are the same. This mode was first made available from 2013-11-02 to 2013-12-02.

One for All games can also be created and played as a Custom Game, and the map choice is not limited to Summoner's Rift; all other maps can be chosen.

The process for selecting champions in One for All is called Vote Pick, which follows the Custom Game Iteration of Draft Pick. After banning 6 champions, each player will have a chance to vote with their team and decide which champion will be played by the whole team. Players may pick any champion in their team's pool of champions (owned and free). If all players or the majority pick (3 votes) the same champion, then the whole team has to play as that champion. In the case that no champion won a clear majority, a random champion will be assigned from the pool of votes.

Teemo were disabled in this mode in the past, and accidentally enabled in 2015. They can only be played in custom matches.

Due to the nature of teams in One for All, some champions and their abilities work differently in the mode.

The following champions apply debuffs to enemies that interact with their abilities in some fashion. If using the same champion, other players can gain these bonus effects even if they did not originally apply the debuff.

The following champions apply marks to enemies. If using the same champion, these marks can be triggered by other players.

The following champions create objects on the field. If using the same champion, these can be interacted with by other players.

One for All: Mirror Mode

Now it’s time for One For All: Mirror Mode! We’ve moved the action to the Howling Abyss and changed the rules so players on both teams clash with the same champ. Soon you’ll really play pinball with Monsoons, dodgeball with Dark Spheres or hide-and-seek with ten times the Noxious Traps.

For this iteration of One For All, champ select is determined by the combined nominations of both teams. A vote tracker shows the nominated champions - if one champ achieves a strict majority, they’re chosen. If not, we base the choice on a weighted random from all the nominated champs, so if four people vote for Amumu, three people pick Blitzcrank and the last three all pick different champs; there’s a 40% chance everyone plays Amumu, a 30% chance everyone plays Blitz and a 10% chance for each of the remaining champs!

After playing your first game, you’ll permanently unlock the One For All icon (it’ll take a few days to hit your account). Additionally, we’ve added a feature to One For All: Mirror Mode that allows you to purchase a Battle Boost for your team during champ select. If you purchase one (150 RP), you’ll temporarily unlock all the chosen champ’s currently available skins for yourself and your allies. Everyone on your team also gets a one-game 100 IP boost!

This game mode was inspired by feedback from you guys, so let us know what you think! One For All: Mirror Mode will be live from May 29 through June 8 and we’ll be hanging out on the Community Beta looking for your thoughts and awesome ideas!"[2] 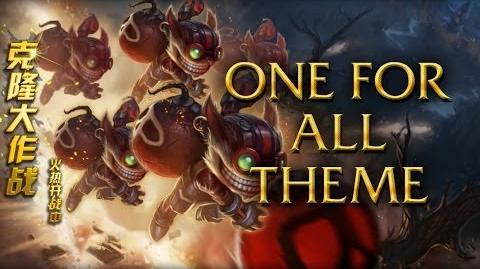