This article is about the short story featuring Sona. You may be looking for One Last Shot featuring Graves. 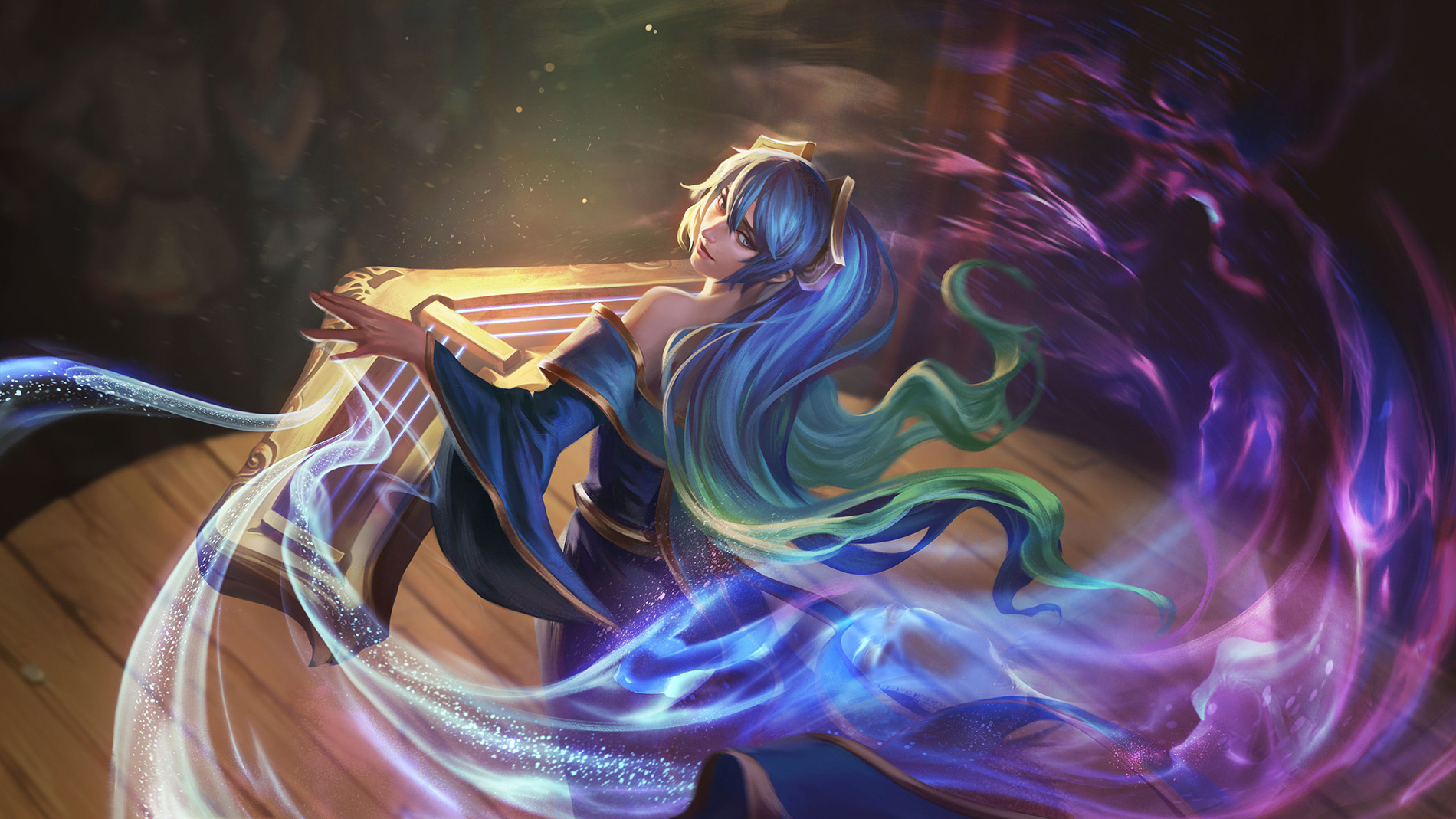 That old, familiar smell hit her first. Hay, strawberries, and sturdy wood. The courtyard of the Argentine Inn had a particular waft to it that brought the ache of memories long past: a hundred concerts, a thousand faces lit by lantern light, and—most painful of all—a time when things were simpler and happier in

But these days, that version of her home country felt distant. Worlds away. When she first spotted her old friend Etra emerging from the doorway of the inn, her breath hitched—maybe this, too, was different. But Etra’s eyes went wide. She shrieked with joy, and as she ran forward to wrap Sona up in her arms, Sona breathed a little sigh of relief. Some things didn’t change after all.

“You got my letter!” Etra said, and squeezed her tight.

Sona nodded. As Etra released her, she stood back to get a good look, still clasping Sona’s hands. “Someone’s been traveling,” she said, impressed. As if noticing Sona was on edge, Etra paused, released her hands, and slipped into the rough sign language they’d forged over a lifetime. All is well?

It was a relief to be able to sign back. To be understood by someone who loved her. Yes, of course, Sona responded, whether it was true or not. Missed you terribly, though. She held her hands a little lower. Didn’t want passersby to see the sharp gestures, the twitching fingers, and draw the wrong conclusions.

How long will you stay this time?

As long as I can, Sona signed. You know I never could refuse an empty stage.

There was no audience around sunset, when Sona struck her first chord, but the first few folks trickled in right away. She was standing front and center in the Argentine’s “concert hall”—a converted barn with a bit of raised wood at the front to make a stage. Some of the people she could see were familiar faces. They brought their evening plans with them: wine by the flagon, cheese in its cloth.

Sona had set her etwahl center stage. The burnished gold on the front was freshly polished, gleaming. It sat on its little frame, the one she brought for Demacian performances only. To Sona’s right, a man named Cal kept beat on the inn’s goatskin drums. Etra’s voice joined her on the left after a moment, high and clear and smooth like water.

As they settled into their familiar rhythm, the crowd swelled. Wagons were pulled up beyond the open door of the stage hall now, horses tied to posts. Some of the men had started to sing along loudly. They were drunk faster than usual. Sona smirked over at Etra, and she signed back with one hand: They missed you, too.

Things were tense for folks right now. They’d just lost their king and seen their country turn on itself in a single bloody year.

As if to punctuate Sona’s thoughts, four figures slipped into the back row of the audience, hoods pulled loose over their faces. Dark blue fabric. Not terribly suspicious on its own, but…

One of them tilted their head up at Sona, and she saw the hint of a gold mask glinting in the light.

Sona’s stomach lurched. She heard the slightest hitch in Etra’s voice, too, but neither of them dared look at each other right now.

The only answer was to keep performing, keep singing, and—hopefully—keep up appearances. The next song in the set was a solo. Etra and Cal slipped backstage.

This was the moment the crowd had really come to hear, and there were small murmurs and comfortable rustles in the audience as people settled in. There was no name for the piece, but they all knew it regardless. It was Sona’s own creation, and she relaxed into it. Her fingers brushed the strings, the air teemed with silence—and then, with a pick of a single note, they were off.

But then something evolved in the music. There were additional layers to it, notes that should have been impossible to play simultaneously. Sona looked up and saw only smiles and closed eyes. The audience had become enamored, absorbed.

It was time. The etwahl had awoken. Long, twisting illusions rose up from the strings, stretching and snapping as the very air hummed. To her, they were brilliant—a language she and the instrument alone shared. No one else could see them.

The etwahl had chosen someone. An old woman in the back of the room was thinking of her husband, a farmer, and the instrument had become throaty with the full warmth and bass of his voice. Sona could almost hear him talk. And in the shapes that rapidly shifted before her, she saw the outline of his weathered face, the way his cheeks crinkled when he smiled. But the outline morphed… the fuzzy curve of a sleeping figure. He had fallen ill and passed a month ago. A hard harvest without him, no doubt.

The etwahl hummed something private to Sona then: the last rasping song the man had ever sung to his wife. The notes hung in the air. She took the snatched phrases of the melody and, without even having to pause, she wove it back into the song, building around it. When she glanced up, Sona saw the widow’s eyebrows raised with recognition, tears trailing down the woman’s cheeks.

The music had reached crescendo now. She and the etwahl were deep in conversation. The shapes had expanded, brilliant and ever-moving, an aurora stretching across the hall…

A shout shattered the song. She halted, frozen. But the shapes still drifted, no longer a secret between her and the instrument.

The mageseekers in the back had risen, making their way down the center aisle. They were coming for her. Some threw their hoods back now. The rest of the audience was still transfixed, unseeing. They hadn’t yet registered what was happening. Sona took two steps back, toward the archway that led out the back of the barn.

“Stop!” one of the mageseekers cried. They were undeniably here for her. She bolted, hefting her skirts in one hand. The etwahl shuddered, broke free of its stand, and drifted after her through the air. Why hide it anymore?

She emerged out back and into the darkness. There was an alley back there—she could flee into the woods before they spotted her. But as she reached the end of the alley, two seekers stepped into her path. She pulled up short and turned around. Maybe… No. Three more blocked her way back to the inn’s door. She was trapped.

“If you don’t resist…” one of them started, but she saw the flash of Demacian steel in his hand and she heard nothing else. Behind her, footsteps. They were closing in.

She backed up against the wall of the inn, all five of them now standing in front of her.

She laid her fingers on the etwahl. I hope Etra ran, she thought.

The etwahl glowed. She struck a

violent burst of music. The chord shot forth from her and slammed into the seekers. The air was charged gold, sickeningly radiant. They turned away from her. She heard their groans, their broken screams, and knew it was over.

They were dancing, all of them. They cut an eerie sight to anyone who might see: contorted, twisting figures bent against their will like puppets being made to perform. It was painful, she knew that much. But she had to make them hurt. She had to make pain the only thing they could remember. That way, they couldn’t remember Etra. They couldn’t come after her.

At first they begged her to stop, but after a moment even that died away and there was nothing but gurgling, the shuffle of footsteps, the creaking and snapping of joints. I didn’t want to hurt you, she thought. I never do. But you… You’re the reason home isn’t home anymore.

One last beat. One final encore. She strummed. The chord reached them, deep violet. They dropped to the floor instantly like discarded toys, unconscious and forgetful.

And Sona disappeared into the silence of the woods.
▲ TOP ▲