Omen is a cancelled League of Legends Champion.

Omen was a quadruped demon/Voidborn-like creature which, as Tom 'Zileas' Cadwell explained in his GC Online talk 'Designers Are Humans Too—Causes of Poor Design Decisions', no one at Riot was sure if he was a

ranged DPS character. This lack of both direction and excitement for the Champion caused him to remain in limbo for a while. Eventually, even though Omen was halfway through his development cycle, Riot realized he wasn't 'getting any better' and was ultimately scrapped and

Riven was released in his place. Patch V1.0.0.125 had to be delayed due to Omen's cancelation in order to accommodate his replacement's release[1]

In 2019, Brian 'FeralPony' Feeney shared some details about Omen's spells.[2] 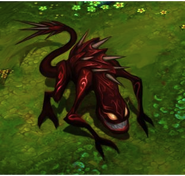