The True Power of Friendship

It's finally time to let the Yeti out of the bag and start talking about the next big VGU we have planned. Nunu and Willump have aged very poorly over time, and as such we'll be rebuilding them from the ground up. We won't be throwing everything away, as the dynamic duo absolutely have a few iconic abilities worth keeping, but thematically, we feel Nunu and Willump belong in a more whimsical, light-hearted space. We want to thaw out these two's relationship and boil down what their friendship really means to each other.

Nunu and Willump should capture the childlike feeling of having your first snowball fight or warming up next to a close friend on a cold winter night. It's not all snowballs and hot chocolate though, as when our heroes backs are against the wall, Willump will make sure his enemies learn the true power of a Freljordian behemoth.

This Snowball Has No Breaks!

With Nunu & Willump just around the corner, we can go into a little more detail on what's planned for the dynamic duo. As stated last time, our goal is to bring Nunu & Willump's kit up to modern standards while also rolling them towards a more whimsical theme. We tried out a ton of iterations for their kit, and in the end, it felt right to keep their ultimate intact. Absolute Zero is a high-impact ability that many players know and love, but current Nunu can struggle landing it. We’re looking to give them more agency to set up plays around their ult by utilizing the rest of the kit.

We also wanted to keep Consume because it's a very iconic ability and gives them their unique niche as objective control junglers. The rest of the kit will have significant changes in order to give Nunu & Willump more ways to set up creative and hilarious plays that will keep the two telling stories and laughing late into the night. 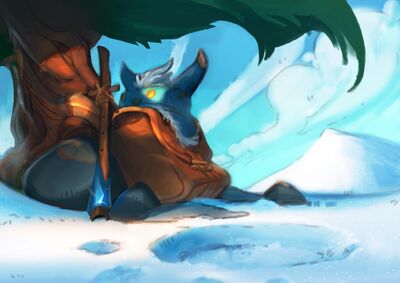 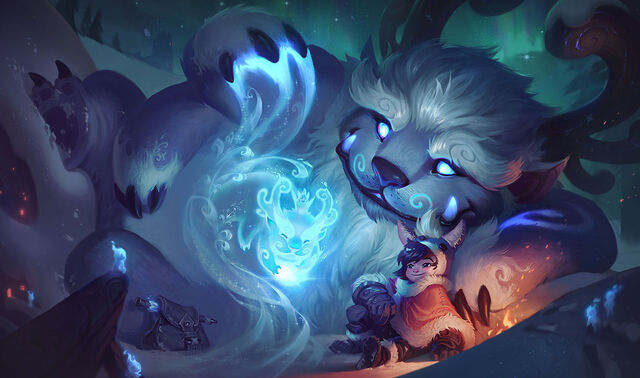 They'll be the greatest heroes ever... one day! After Nunu discovered the fearsome monster of legend was just waiting for a good snowball fight, he and Willump became the best of friends. Now they roam from one adventure to the next, their imagination running wild and wintry magic making it real—unaware that they play with the power to save the Freljord.[4]

Damaging enemy champions, large monsters, or structures increases the attack and movement speed of Willump and a nearby ally for a few seconds (prioritizing the ally with the highest attack speed).

While Willump hears the Call of the Freljord, his basic attacks cleave the immediate area for a portion of the damage.

Willump takes a bite out of an enemy, dealing true damage to monsters and minions or magic damage to champions, and heals himself.

The heal is increased significantly when Nunu & Willump are low on health.

Willump starts rolling a snowball that grows in size and speed. Crashing the snowball into a wall, enemy champion, or large monster damages and knocks up nearby enemies. Reactivating the ability sends the snowball forward in straight line, damaging and knocking up minions in addition to champions and monsters.

The damage and duration of the knockup increases with the size of the snowball.

Nunu rapidly flings up to three volleys of snowballs for a few seconds, damaging champions and monsters and marking them Snowbound. Enemies hit by all three snowballs in a volley are briefly slowed.

When Snowball Barrage ends, all Snowbound enemies near Nunu & Willump are briefly rooted.

Nunu & Willump sap heat from the area around them, gaining a shield and increasingly slowing enemies as they channel. Enemies still in the freezing zone when it reaches absolute zero take massive damage, increased based on the length of the channel.

Absolute Zero can be cancelled early, and channeling from brush or fog of war won't reveal Nunu & Willump.

Nunu & Willump traverse the wilderness in a flurry of snowy magic and yeti fur, locking down objectives and keeping watch for fellow adventurers. Make quick meals of jungle monsters with Consume after crashing into the camp with the Biggest Snowball Ever! Keep on rolling as you roam between lanes, pelting the bad guys with a Snowball Barrage to slow them down so Willump can have his turn. Once they're nothing but slush, follow the Call of the Freljord to take yeti-sized chunks out of the nearest tower.

If you're ready for the best snowball fight of all time, combine a frosty Snowball Barrage with your ult for an avalanche of disruption. Absolute Zero creates an icy no man's land no foe can cross, protecting friendly folk by zoning the not-so-friendlies. When the snow finally settles, take a final chomp with Consume to slay a legendary beast and become true heroes to all the land. 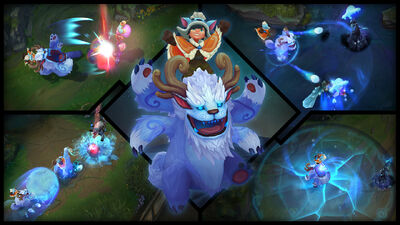 “Didn’t anyone tell you?
The bad guys never win.” 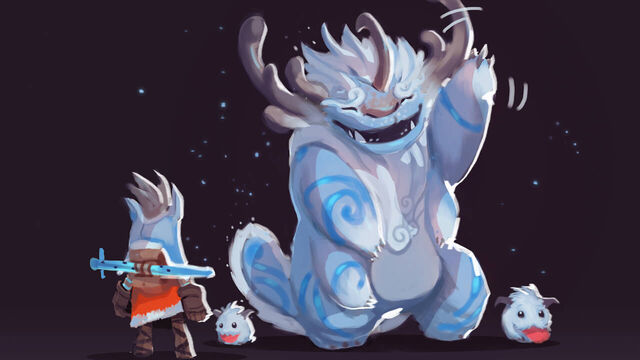 Nunu & Willump are probably the most wholesome duo in League of Legends, and they're heading to PBE this week. While you're waiting for your chance to roll the Biggest Snowball Ever!, here are nine tidbits about their development, featuring game designer Justin “Riot Xenogenic” Hanson, concept artist Justin “Riot Earp” Albers, and narrative writer David “Interlocutioner” Slagle.

1) Nunu and Willump's new kit has two abilities that have been (basically) locked from day one.

Nunu is one of League's original 30 champions, which means his ultimate is almost a decade old. Absolute Zero is iconic to both Nunu and League, which is why his ult works the same as before—only now it also provides a shield for the duo to weather the storm of battle. Nunu's Consume was important to his identity as a jungling objective controller, and with the update, Nunu's yeti pal can Consume more than just monsters. At last, it's time to live out your wildest fantasies of Smiting and Consuming enemy champions.

2) Playtesting Biggest Snowball Ever! was a huge moment in development. 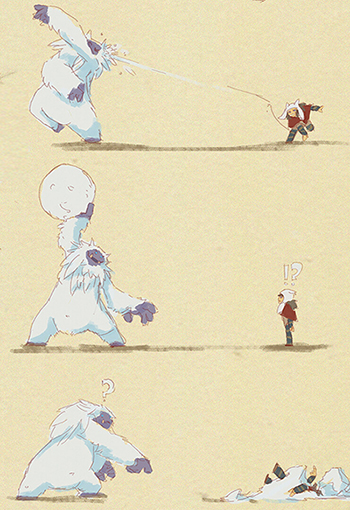 “As soon as we tried out rolling a giant snowball in game, that was it,” says Riot Xenogenic. People in playtests were hyped—it made ganking and traversing the jungle fun, even when they missed the target completely and smashed into a wall.

“I think that’s part of what makes playing Nunu special: I can have fun failing,” says Interlocutioner. “It ties into the sense of, ‘We’re here to have a good time,’ which is exactly what Nunu & Willump want.”

3) Creating their E was one the hardest parts—it took nearly 20 spell variations to land on Snowball Barrage.

Most of Nunu & Willump’s kit was ready pretty early, but it still took the full development time to finalize because creating their E was so tough. “We started with a couple of abilities that didn’t really synergize together, so it was hard to even know what we wanted E to do,” says Riot Xenogenic. “We ended up going for something with CC to make their ult more reliable and give them more tools to succeed as a Warden.” (Wardens specialize in keeping their allies safe and disrupting fights, like Braum.)

Plus, Snowball Barrage is a true team effort: Nunu smacks the targets with snowballs, and Willump freezes ‘em into the ground.

4) There’s a storybook about Nunu & Willump’s adventures hanging on the wall where the devs sit. It’s spectacularly hand-written and illustrated. With crayons.

Nunu’s narrative writer Interlocutioner created this masterpiece early in development, and it helped everyone rally behind the playful tone of the characters. “The fact he made it with crayons just felt so right,” says Riot Earp. 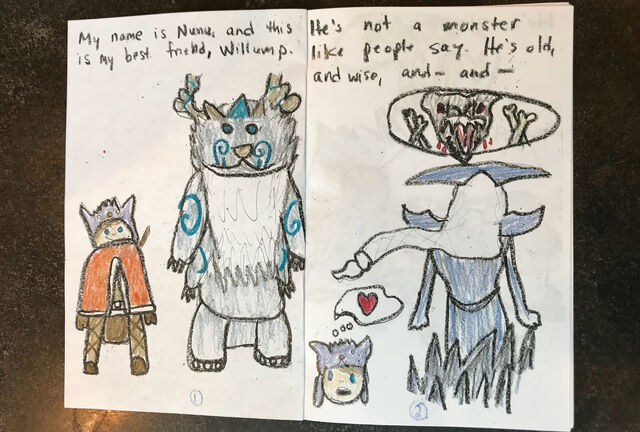 5) Willump could’ve been a scary behemoth, but people liked him more as a soft and huggable pal.

A bunch of concept artists kicked off Nunu's rework by taking a day to explore art directions for Willump. The result was a wide array of yetis ranging from adorable to abominable. “Whenever we’d dig deeper into the monstrous-looking guys, people would be like, ‘Yeah, but what if he was fluffy instead?’” says Riot Earp. “I’m pretty sure it was the huggable factor.” 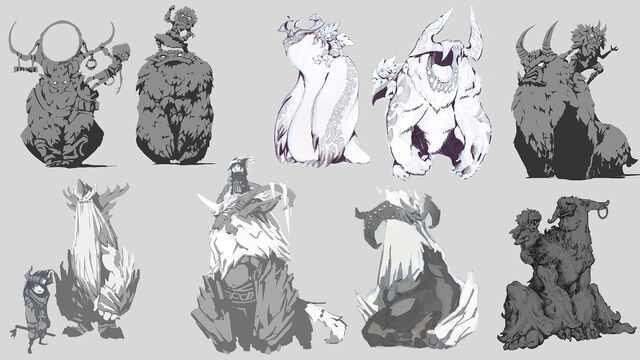 For the record, Willump's soft fur and extra arms make him the best hugger in Runeterra. This is indisputable fact. “During their recall, Willump throws Nunu into the air and catches him in a giant yeti hug,” Riot Earp says. “I want to do that. I want Willump to catch me.”

6) One of the (unofficial) goals of Nunu & Willump's rework was to give them the saddest death animation in the game.

And no, we haven't fully recovered from seeing this either.

7) Every sound Willump makes in-game has been translated into human words.

“We know exactly what Willump is saying because he’s actually talking, Chewbacca-style. Only Nunu can understand him,” Interlocutioner says. The team gave the English translations of Willump's grunts to his voice actor so he'd know exactly what inflections to put into the sounds.

What does the pair talk about? “Willump has a different perspective on the world because he’s so ancient,” says Interlocutioner. “He sometimes tones down his wisdom so he can have fun with his best friend, but they have moments of mentorship, too.”

8) All the trolliness associated with Nunu's core character was siphoned out and put into Nunu Bot.

Nunu Bot is troll turned up to 11. He honks a squeaky bike horn while rolling an electrical ball with a terrified robot inside down mid lane, all while saying classic lines such as, “We must tower dive,” and “Rito Plssssss.” And you can sleep soundly tonight—Nunu Bot's laugh is exactly the same as before. “We used text-to-speech to record his lines again, and the new laugh just didn’t feel right,” says Interlocutioner. “We wanted to do good by players with this skin, which is why we also kept most of his original voice lines.”

9) The AP Nunu dream is alive.

Absolute Zero still scales with Ability Power, and their snowball hits like a snowtruck when you build AP. “I just had a playtest where I drove a snowball into a Lux and one-shot her,” says Riot Xenogenic. “I had Predator boots and came rolling in with like 900 movement speed—so basically a Sion ult—and then SMACK! Deleted.” The AP ratio and movement speed on Snowball were both slightly nerfed after that playtest, but the AP dream is alive and well.

You can send us your one-shot montages in two weeks when Nunu & Willump roll onto the Rift. In the meantime, try not be too jealous of their perfect friendship.

The brisk chilling air is calling
And out there we're free
To run, and jump, and live so wildly

And though the Sun may set at night,
Tomorrow looks so bright

'Cause home is when you're by my side
No matter what we do,
Together we'll see it through

And I hope that we won't drift apart
Even though things change,
Without you, it's not the same

The Path to Hearth-Home
Dark smoke exhales, from the mountain half

Nunu & Willump - “It’s Me & You” League of Legends Community Collab

Retrieved from "https://leagueoflegends.fandom.com/wiki/Nunu/Development?oldid=3068426"
Community content is available under CC-BY-SA unless otherwise noted.