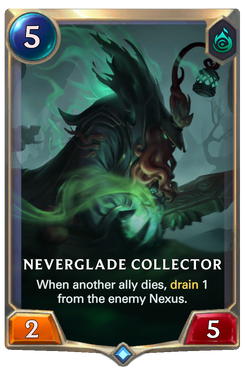 unit other than me

drain 1 from the enemy

"Bumped into Niven this... the new ferryman! He rowed us... to... He can certainly hold a tune! Before... must invite him to supper soon." - Recovered journal

Legends of Runeterra
Retrieved from "https://leagueoflegends.fandom.com/wiki/Neverglade_Collector_(Legends_of_Runeterra)?oldid=3279759"
Community content is available under CC-BY-SA unless otherwise noted.