The original single laned map was used for the game's tutorials. Due to community demand, the map was made available for selection in custom games and was eventually replaced entirely by Howling Abyss. The new features added for the ARAM game mode when the map was reworked into Howling Abyss – such as Shopkeepers, critters that give away nearby enemies, and the future addition of the

Dash summoner spell – do not have equivalents on Proving Grounds.


A little over a month ago, a number of developers and I participated in Riot's first ever Thunderdome - a periodic, company-wide event aimed at allowing developers to work on whatever they want. My team set out to make the Proving Grounds, our basic tutorial map, playable as full on 5v5. This is something I've wanted to do ever since I originally worked on the map, and with the help of some other devs (and a good bit of caffeine) we managed to get everything up and running. Everyone was pretty happy with how the effort turned out, and with the upcoming removal of Winter Summoner's Rift we saw an opportunity to sneak the new map out by repurposing the same UI hooks.

In the next patch, the Proving Grounds map will be selectable in custom games. While we've been playtesting it internally as All Random (and lovin' it) for quite some time now, all the pick options will be available - Blind Pick, Draft, and All Random - because we're excited to see what variation you enjoy the most. We'd love to hear any feedback that you may have, as both RiotNome and myself will be providing support post release. Check it out and let us know what you think!

Additional information was released to the players on the forums: 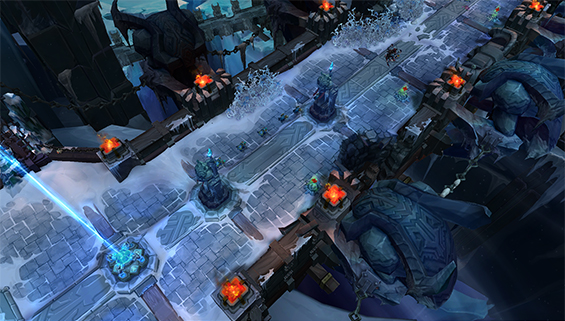 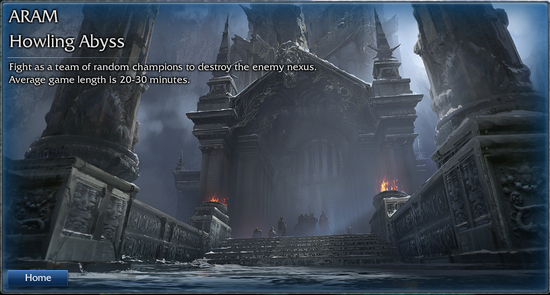 TLDR: Later this summer, we'll launch our next event called Bilgewater: Burning Tides. As part of the event, the temporary Butcher's Bridge ARAM map brings Bilgewater to life for the first time in game. Read on to learn more about the new map and the creative storm at Riot inspired by the possibilities in the teeming port city.[4]

Bilgewater: Burning Tides sails into port later this summer, but content from the event starts hitting PBE over the next few weeks. Consider this article a spoiler-free sneak peek, but you may want to avoid Bilgewater-related news until the event kicks off if you want to follow along with the story.

Bilgewater anchors the latest lore-inspired event after the Shadow Isles, the Freljord, and Shurima. Teams all over Riot felt it was pretty obvious the bustling port would make an awesome setting for an event for a while now. Narrative and world-building teams laid groundwork for an overlap of cultures and styles that'd scuff up the image of the place, and help the gritty black market come alive.

We ended up choosing Bilgewater when a dev team built a Bilgewater-style ARAM map from scratch during one of our Thunderdome hackathons. Everyone's enthusiasm at seeing Bilgewater realized in-game drove the overarching thematic of the event. After the jolt of creativity sparked by Thunderdome, tons of teams across Riot banded together to deliver a Bilgewater experience with a wide swath of content--including a re-imagined evolution of that Thunderdome map.

Butcher's Bridge brings Bilgewater to life in game. In the new map, the original native culture of Bilgewater and the outside influence from across Runeterra meld together, showing off the stratified melting pot of races, cultures, and creeds.

We've incorporated blends of ancient and modern Bilgewater imagery on inhibitors, nexii, towers, and scattered around the bases. On one side, boat houses flank a temple door, and on the other side a giant ship hull sits ensconced, ringed by temple carvings on the sides of the cliffs. Rotating cannon turrets launch heavy artillery fire along with other small details designed to put you inside the pirate bay.

We're focusing on the visuals in this blog because the gameplay for ARAM isn't changing at all; you'll still experience the same frenetic all-random action. It's just that now, given the nature of the slaughter-docks, you'll be fighting on what is quite literally a murder bridge.

With the overall event goal to deliver an in-depth exploration of the world, we had to rethink exactly what it means to be a denizen of Bilgewater. Our explorations into the pirates, smugglers, and shanty-dwellers led us to an indigenous island society when it became clear the city had existed for centuries.

From those suggestions, artists evolved the architecture of the islands with vibrant colors, uniquely textured shapes, and decorative motifs. The native culture took on a bigger role in shaping the look of the environment, emphasizing the hunting and harvesting trade the indigenous peoples had made of sea monsters.

Sea monster hunting and harvesting is a common way of life in Bilgewater, and seeing behemoths rise from the deep is just part of a normal day for grizzled veterans of the criminal haven. As a result, you'll see sea monster iconography all over the event, as part and parcel of Bilgewater's unique appearance.

The bustle and grind of a busy port betrays the wide variety of influences on the city. Between inverted Freljordian longships against the carved cliff-faces and the slow evolution of indigenous carvings and hints at other regions of the world, the depth in the narrative behind the streets and the culture finds new forms of expression.

We named the new map after the massive dilapidated bridge looming above the slaughter-docks. Once an ancient stone bridge that led to a temple entrance, it's been kept up haphazardly and now makes the perfect battleground for an all-random fray.

As Runeterra's biggest black market, keep your eyes peeled for clandestine, coded messages, illicit hextech pilfered from Piltover, and other easter eggs hidden amongst the shopkeepers' wares and the assorted scattered items around the scene.

We're putting Butcher's Bridge through the wringer on PBE, and it'll be moored up there just a little while since we still have some work left to make her seaworthy. One last note on the map: while Butcher's Bridge is replacing Howling Abyss as your go-to destination for all-random assault during Bilgewater: Burning Tides, we're still exploring post-event options.

Share your first impressions of the newest ARAM map and the upcoming event in the comments below or over on the boards. We're excited to hear what you think, and can't wait to join you for Bilgewater: Burning Tides, the next League of Legends event!