We've just about finished our latest update on

Morgana, who's now dressed for success and ready to torment live!

Unlike most of our recent work, Morgana's update was predominantly aimed at brushing up the Fallen Angel's readability, meaning we focused on adjusting the gameplay clarity of her abilities. We've widened the visual width of her

Dark Binding particle to better represent the actual size of the missile. Now Morg players can judge more accurately whether their

Q's going to land, while her enemies can more accurately see where they need to get to avoid getting snared. We also fiddled with

Tormented Shadow so that it's a little more visible in brush, and tweaked

Black Shield so you can better understand if Morg's

E has been taken out or just faded away. Finally, we made some changes to

Soul Shackles, giving visual and audio cues as the tether ramps up to stun, and adding a new unique sound whenever enemies successfully duck outside the tether's range.

Finally, let's talk about another iconic League of Legends duo: Kayle and Morgana. Time has been a pretty kind judge to Morgana, though not so kind to her sister Kayle. For both of the winged sisters, we'll be evolving their art with a new theme that binds their narratives together and gives them a stronger place in the League universe.

As for their gameplay, Morgana's has held up well over the years, so if we do change anything, it'll likely be adjustments to her passive or W in order to better match her new theme. Kayle, on the other hand, will be receiving bigger changes to her kit. We want to preserve Kayle's identity as a champion who starts as a melee/ranged hybrid champion, and as the game goes on, ascends to become a ranged powerhouse, raining down holy judgement on any she deems unworthy. Not only do we want to preserve this, but we want to embrace it so it's reflected in more than just her stats, radiating through her entire theme as well. The sisters are still a ways off, so look for more info on their development in the next Roadmap, scheduled for early next year. 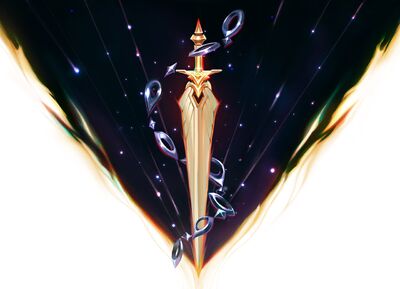 I talked a little about Kayle a few months ago. As I mentioned before this will be a full VGU, where we build her art, audio, gameplay from the ground up, to truly deliver on the Holy Angel fantasy that Kayle embodies.

While all her abilities will be altered or changed in some way we do want Kayle to still have the same overall feel as live Kayle.

For one we will be keeping her an Auto Attack focused Champion, and building her kit around a core Auto Attack pattern. We also want to enhance the feeling of starting as a melee range champion and then ascending over the course of the game into a ranged hyper carry. We also want to preserve Kayle's supportive side, so expect to see some form of a healing and invulnerability on the kit, even if they work differently then current Kayle.

Expect to see Kayle in full light soon, but every light casts a shadow which brings me to my next topic.

In the last Roadmap I mentioned that we weren't sure if we were going to do any gameplay changes at all to Morgana. That being said we still wanted to take this opportunity to explore if there were any small changes we could make to Morgana's kit to make it feel fresh. The Goal of the changes will be to make it easier and more rewarding for Morgana to make plays with her ultimate in the late game, as currently it can feel like using her ult in the late game can be very risky and oftentimes just leads to her own death.

Morgana is a Champion loved by many players and we wanted to giver her new visuals, VO, animations, to really make the Fallen Angel theme shine when she finally steps out of the shadows later this year. 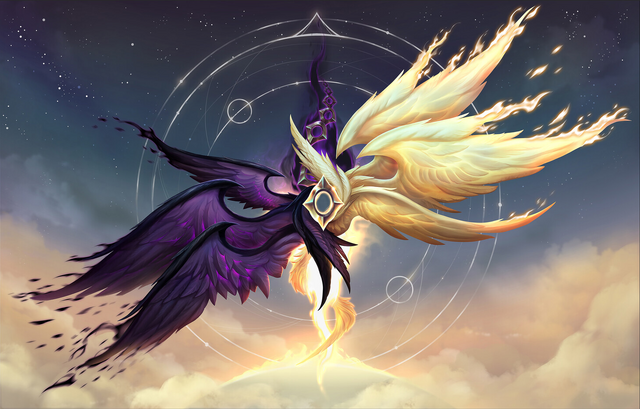 Two sisters were born from the Aspect of Justice. Kayle, the Righteous, wields celestial might and purges lands of the guilty. Morgana, the Fallen, refused to forsake her people. She bound her wings and receded into shadow, pained by her sister's choice. Two sisters born from Justice chose opposing paths. They bide their time waiting for the destined day when they cannot evade their other half.[4]

Split between her mortal and Celestial self but wholly opposed to the unyielding ideology of her twin sister, the dark enchantress has been visually updated to match her divine origin. Morgana has bound her wings by choice, reflecting her connection to humanity and our shared suffering, but her ultimate reveals her birthright. In addition, the Fallen's shadowy spells have new animations and visual vibrancy. Already a powerful pick in both mid and bot lane, Morgana's abilities remain the same—save for her ultimate, which now grants movespeed towards enemies to ensure they can't escape their share of torment.

“Justice is a lie of the powerful.”

Retrieved from "https://leagueoflegends.fandom.com/wiki/Morgana/Development?oldid=3060665"
Community content is available under CC-BY-SA unless otherwise noted.