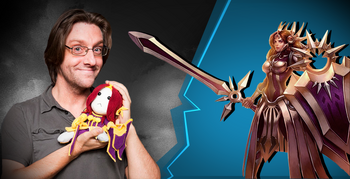 He draws pictures and plays video games for a living.

IronStylus is has an almost cult-like following, dubbed the Iron Solari. He also enjoys noodles and is often baited into threads with Leona, who they based off their wife who they themselves have described as "beautiful and extremely tall",[2] and parrots. (They own several.)

He continuously gives information about champions of Mount Targon, as he has had a signicant deal of interaction with them.

Of the art team, he is the only one who was actually active on the forums, as well as continuously involved in champion designing.

Continuing his stay on the boards, IronStylus has created a thread for summoner's to share their very favorite skin ideas on the forums!

"Yup! I know there's a lot of individual threads with suggestions. However..

I'm looking to doodle some skins in my spare time. I know there's a TON of great community concepts out there. Some are serious, some are silly. I'm interested in what's floating around. Got any suggestions? I know there's individual threads, but sometimes it's hard to skim through them all D:

TO CLARIFY! Ideas floated have no guarantee of actually happening. I'm just overall curious to see what shows up in this thread and what rises to the top, as well as maybe messing around with some ideas on my spare time.

Anyways, give it some thought! I'd love to see what the cream of the crop ideas of the community are! And as always..." 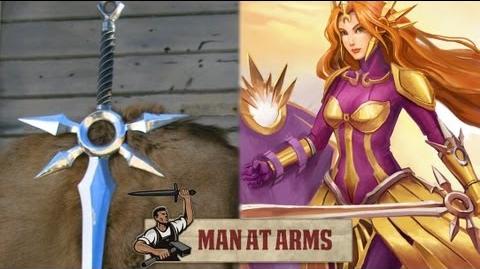