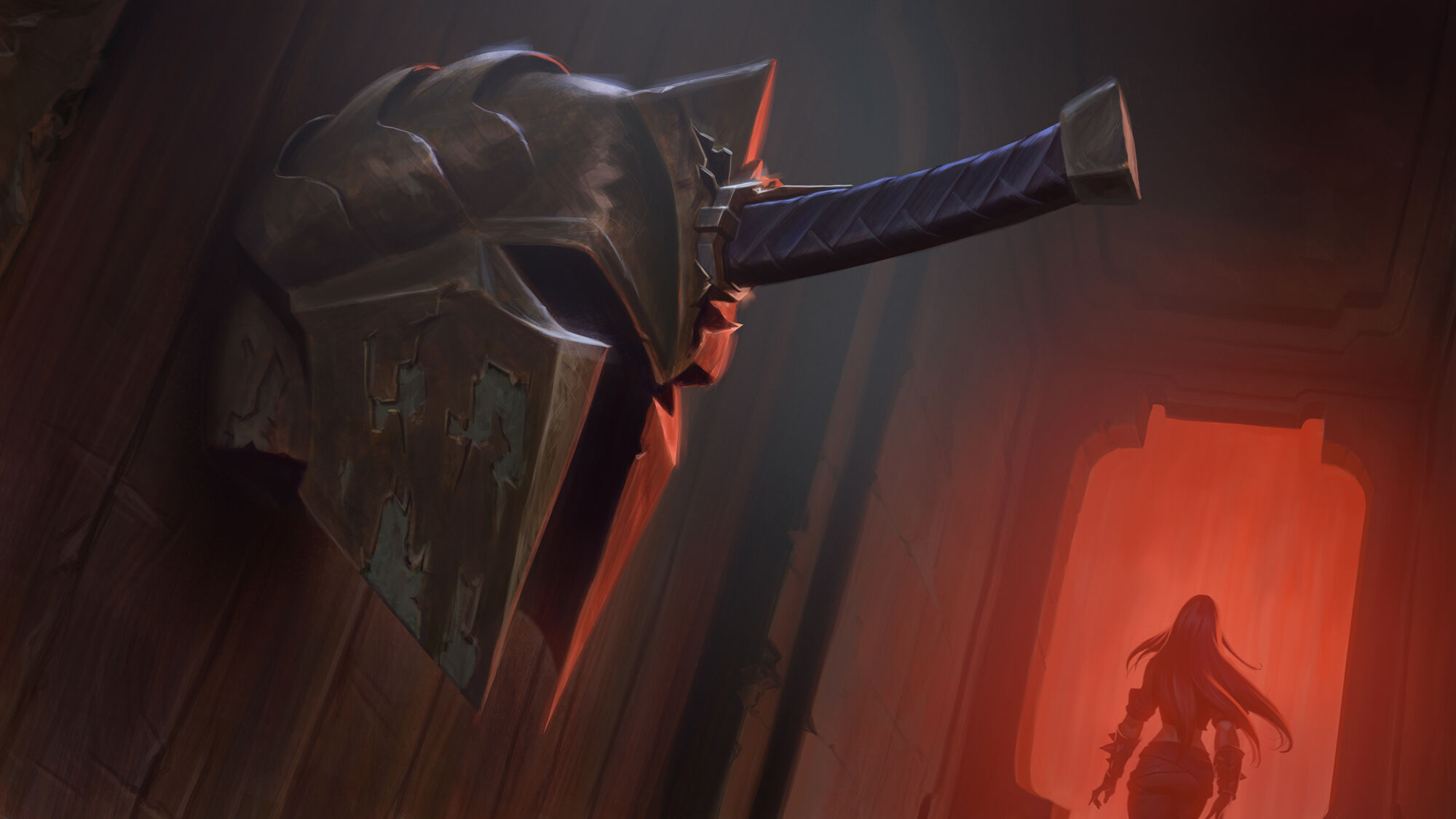 A shout from behind. Someone’s caught sight of me. Doors flash by as I sprint down the wide hall. Stone archway ahead—my way out of the barracks. Suddenly blocked as an entire patrol skids into view. Not good.

I turn and dash back the way I came. More soldiers careen towards me. My fingertips itch, but there are too many. I vault through a door, slam it shut, and drop the wooden bar across it.

An assassin’s blades are but one of her weapons, his voice echoes in my head, cemented there by years of training. Know your mark. Know the killing ground. Anything can be a tool to secure the kill.

I run through the room. Some kind of trophy chamber. Well fortified, with a side door leading to a back corridor. Behind me, armor thuds against oak. Iron hinges and strong construction should buy me more than enough time to—

My thought is broken by the sound of splintering wood, as a massive axe chews its way through the frame. Ahead, the other door swings open, and more soldiers pour in.

Too many, too well prepared. They knew I was coming.

These soldiers wear Noxian colors, but bear the sigil of a house in open rebellion against the Trifarix. So assured of their strength, they spent time painting rather than preparing. How cute.

I draw my blades.

Those ahead slow their advance, fanning out, weapons at the ready. Behind, those storming through the broken door do the same. They circle, taking a trained formation. Six in front. Seven behind. Won’t be easy.

I let a blade fly. It glances off the chandelier hanging above, breaking the chain and sending it crashing down onto the soldiers behind me. Two bodies hit the floor as candles bounce and sputter out, casting wild shadows and drawing eyes betrayed by reflex. I spin into the nearest distracted man, and slide my dagger into his side. He gurgles as his lungs fill with blood.

I unsheathe my blade from his body with a satisfying squelch, and fling it at the second chandelier. It also crashes to the floor, the last sources of light flickering out. At the same time, I sidestep the swing of a charging soldier, letting momentum carry him into the two rushing me from behind.

Cries of alarm and confusion echo off the stonework as they struggle in the darkness, suddenly uncertain which silhouette friend, and which is foe.

I don’t have that problem.

Adapt where others cannot. Lead their intuition astray, and their instinct to betray them.

I dash forward, low to the ground, scooping up my first blade where it fell. It finds a throat, then an eye, then a kidney, before a shout cuts through the screams.

“You fools! She’s right there!”

As the remaining soldiers stumble toward me, I close my eyes, sense my second blade where it lies, draw my focus inward, and leap.

They cry out in confusion as I disappear from their sight. I land low behind them, snatching up the dagger and spinning, cutting through ankle tendons. I am rewarded with screeches of pain and surprise as three more fall. That never gets old.

I invert the grip on my daggers and jump, plunging them down in an overhead strike into the shoulders of the man who yelled, then kick off him into a backflip. He falls to the ground as I hurl both blades into the faces of two others.

The butt of a spear smashes into my head. I recoil, slightly dazed. With a flourish, the soldier that caught me off balance brings the spearhead to bear and jabs for my heart. I leap again, appearing in midair, my hand wrapping around one blade and wrenching it from the face I left it in.

I barely pivot my attack into a parry as an axe swings toward my ribs, the clang of metal ringing in my ears as I stumble back. The titan of a man wielding the weapon hefts it again, and I leap once more to my remaining blade. I pull it back just in time as another soldier swings a morningstar at me, and she smashes through her comrade’s face. The weapon’s points graze my arm, drawing blood.

I roll back and reset in a crouch. Four remain standing, scattered before me. Several more are injured but still alive. All of them squint at me in the darkness. Clearly they now know to track my daggers as well as me.

Never take a fair fight. The cornered assassin is a dead assassin. My eyes flit between the exits.

Then she strides into the room.

Through the side door. Flanked by her two personal guards, each wielding a crossbow. She has a torch in one hand, a sword in the other. An arrogant smirk dances on her lips. Even in the darkness, she oozes confidence and charm. All other eyes immediately fly to her.

“Well, this is disappointing,” she drawls. “If all the Trifarix has to throw at me is a disgraced assassin, then they must be desperate.”

Her taunt is undercut by footfalls outside the room. Reinforcements, arriving fast. Clearly she underestimated the numbers needed to trap me.

But that will be of little consolation if I end up dead.

If you’ve been made, vanish. Never take your mark head on. Never kill in the presence of witnesses.

I smile and stare into her eyes. “Goodbye, commander.”

throw my blade straight up in the air. Crossbow bolts fly toward it, predicting my leap. The four standing soldiers charge.

Time seems to slow as the blade spins.

I fling the remaining dagger past the charging soldiers at my target. One of the guards shifts in front of her, and the dagger sticks fast in his breastplate.

I leap to my dagger—my momentum forces the point through the man’s armor, into flesh. I see the white of his eyes, the mixture of shock, pain, and fear. Behind me, I hear the others shout and pivot. Impressively fast. Still not fast enough.

The commander stumbles back and raises her sword. Reaction dulled by surprise. I pull my dagger free and lunge forward. My free hand finds her hair, my edge her throat.

Another crossbow bolt flies through where I had stood a moment earlier, but I am gone. It pierces the mark’s chest, as I land back at my falling blade, now plunged into the ground. In one hand, I hold a bloody dagger. In the other… the severed head of my mark, her face frozen in surprise.

Her body collapses. Blood sprays over the stone floor. Her soldiers halt, caught in disbelief and horror.

I throw the head down in front of them.

More soldiers arrive at the doorway. I revel in their gasps and angered cries.

Never take your mark head on. Never kill in the presence of witnesses. The voice repeats itself in my head. Somehow, it seems quieter than before. I laugh out loud.

I am no longer your assassin, father. I have outgrown your timid little rules.

I flick blood off my blades and stare down the soldiers before me. Fear is as powerful a weapon as any dagger. Let them see. Let the rumors spread. I am far more than a mere instrument of death.

I am the true will of Noxus.

Before me, a soldier lets out a shout and charges. I can’t help but smirk as I again raise my blades.

Not that I mind the killing.

Lore and Events
Retrieved from "https://leagueoflegends.fandom.com/wiki/Message_on_a_Blade%27s_Edge?oldid=2987806"
Community content is available under CC-BY-SA unless otherwise noted.