Runeterra Prime
Meltridge is a settlement located in the eastern part of Demacia. 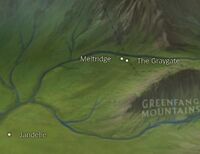 Meltridge was the peaceful settlement before the Mage rebellion. While ignored due to their small amount of magic, once the rebellion started Mageseekers gathered all the inhabitants of Meltridge with even a shred of magic within them. This has almost lead to a civil unrest against the Demacian military and Mageseekers if it weren't for the quick actions of a soldier named Cithria. She promised to find and return Meltridges loved ones.