League of Legends Wiki
Register
Don't have an account?
Sign In
Advertisement
in: Mel, Characters, Characters in Arcane (TV Series)

Piltover and a member of Piltover's ruling council. A disowned heir of the

Medarda Clan, Mel is an ambitious politician willing to do anything to put herself at the top. Using her political prowess, the actions she made have forever changed the course of Piltover's history.

As the daughter of Ambessa, a

Noxian Warlord, Mel would learn about death and war from a young age. However, her advocacy of diplomacy and distaste for intimidating violence as a deterrent would later be deemed a liability by her mother. She was disowned and banished to

Piltover. Despite being a Medarda, one of the richest clans in the city, she would be considered as an outcast amongst her Piltovan family members.

With dedication and political talents, Mel would succeed in rising up the political ranks of her clan, becoming a member of the Council of Clans.

During the trial of one

Jayce Talis she would learn about the potential of magic being utilized with technology. This would intrigue her enough that she would vote for Jayce's expulsion from the Academy (as oppose to his banishment from Piltover), even convincing another councilor to vote in her favor.

Later on, she would even help Jayce and

Viktor with their attempt to sneak into

Heimerdinger's lab, stipulating to them that they have one night to prove themselves and that their invention is workable. She then aids in concealing their activities by distracting a guard patrolling the Academy. After Heimerdinger arrives to thwart the two in conducting their experiment, he arrives too late and the two manages to prove they can harness magic via Hextech. Although Heimerdinger doesn't think Piltover should enable Hextech, Mel intercedes and proclaims that is an issue for the council to decide.

With her influence, the council votes towards the open implementation of Hextech, even funding the construction of the Hexgates.

As a Councilor, Mel was present during the 200th Piltovan Progress Day, where Jayce was to reveal his new Hextech inventions. With Jayce faltering in the last minute, she would leave the celebration early. This however, did not stop her in eventually turning Jayce to her side, with political scheming and intimate relations. She managed to thwart Heimerdinger from his seat through manipulation while also getting Jayce appointed as a council member.

Due to the increased violence from

Zaun and the death of her brother Kino, her mother would arrive in Piltover to closer inspect the actions of her daughter. Objecting to the violent approach suggested by her mother, she would advise Jayce and the council to find more peaceful and diplomatic approaches to the Zaunite crisis before Noxus intervened. This would ultimately lead to Jayce brokering a peace with

Silco in exchange for Zaun's independence. Siding with Jayce, Mel would be the first councilor to agree to this proposal, spurring the rest to follow suit.

While the meeting was almost done and the crisis nearly averted,

Jinx attacked the council chambers; her

Super Mega Death Rocket hitting the glass window right next to Mel. It is unclear if Mel survived that attack.

Mel is a slender and ebony skinned woman. She has dark curly hair and green eyes. She wears elegant clothing with gold elements reminiscent of both

Mel is a clever and cunning person, able to convince and manipulate people to her advantage. She cares for Piltover and wants to see it prosper, but she is very analytical, and can often be hesitant to support radical or hasty solutions to problems. While she cares for certain members of her family, she does not like her mother and would end up voting for peace with Zaun in defiance of her mother's ideals.

A brutal Noxian warlord, she taught her daughter about the art of war from a very young age while still being Solari. However, eventually she would see that Mel's forgiving nature was a liability to her, so she banished her to Piltover. A strained relationship, Mel fears her mother while also resenting her for her past actions. She would eventually confront her about it, which would lead to Mel symbolically cutting ties with her Noxian roots.

Mel respected Heimerdinger as the founder of Piltover. However, she saw his conservative and stifling ways to be a hindrance in her rise to power. She would undermine his authority by aiding Jayce and Viktor legalize the use of Hextech in Piltover, and later voting him out from the Council.

While initially using Jayce to gain more wealth and prestige, Mel would eventually have some deeper feelings towards the inventor—even defending him from the self-serving influence of her ambitious mother. She would be concerned over his issues and would give him sound advice, all while still putting her own goals into consideration. Over time, Mel became less reserved around Jayce and began sharing personal details about herself as well. While Mel's relationship with Jayce started out as a means to an end, it ultimately became sincere love. Mel was crucial in Jayce's meteoric rise to fame: she even swayed the council to elevate Jayce and grant him a seat on the council.

Kino Medarda is the brother of Mel. Kino was said to be gifted with a silver tongue and also believed that he could talk his way out of anything. He eventually crossed the wrong man and died for it. Kino used to tell Mel that "War was a failure of statecraft", which may have influenced Mel's preference for diplomacy. 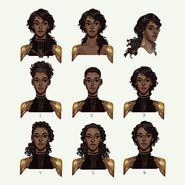 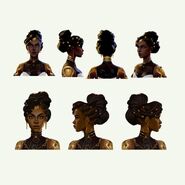