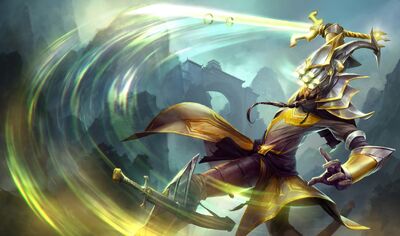 Master Yi in the coming patch. In addition to new sounds, voice over and spell effects, the Wuju Master is also getting a kit overhaul to combine his popular AP and AD builds into a single cohesive playstyle. Check out his reworked abilities and read how the kit plays out below.

Master Yi leaps forward and strikes up to four enemies, dealing physical damage to each. Alpha Strike can

crit to deal additional physical damage and will deal bonus damage to minions and monsters. Basic attacks reduce the cooldown on Alpha Strike. 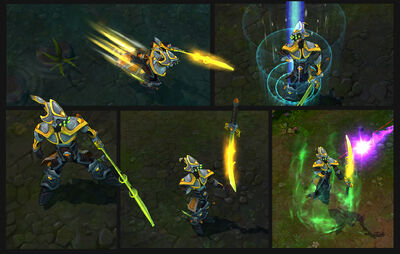 Alpha Strike make Master Yi a more dynamic fighter in lane while rendering him less frustrating for his lane opponents. Since

Alpha Strike prioritizes nearby units instead of striking randomly, a skilled Master Yi player can carefully aim his attacks while a canny opponent can avoid damage through careful positioning. Meanwhile, the cooldown reduction from basic attacks allows Yi to

Meditate make it a more potent option in emergency situations, but prevent Yi from simply spamming it to top his health off every time he takes damage.

To compensate for reduced early game damage on

Alpha Strike, we've made the bonus damage to minions and monsters guaranteed to smooth out his jungle time. The cooldown reduction he gets from basic attacks should also allow him to

Double Strike now deals less damage more frequently and requires Yi to stay in combat, it should be harder for him to queue up a double attack, then come tearing out of the jungle to score a massive burst combo onto an opponent.

As the action edges into late game and the team fights begin, the changes to

Highlander start to shine. The new

Alpha Strike. The true damage on

Wuju Style gives Master Yi the freedom to initially focus tankier targets while waiting for the right moment to open up on vulnerable targets. Then, when the time's right, he can open up with

Alpha Strike and punish the enemy team's more delicate back line. Meanwhile, the changes to

Meditate increase its lifesaving potential when he's under significant focus fire, and the added damage and crit on

Alpha Strike help it scale to keep up with his basic attack damage in late game scenarios.

Overall, the changes should help Master Yi play more consistently by combining the sustained damage of his AD playstyle with some of the nuke-and-juke utility of his AP build.

Retrieved from "https://leagueoflegends.fandom.com/wiki/Master_Yi/Development?oldid=3070504"
Community content is available under CC-BY-SA unless otherwise noted.