Keeper of the ancient art of Wuju, Master Yi is a mystical warrior from the isle of Ionia. He descended from one of the few tribes dedicated to the preservation of Wuju, a martial art founded with the principles of absolute spiritual awareness of one's self and one's enemy. When the armies of Noxus invaded Ionia, Master Yi joined in the Ionian defense to fight the craven enemy, bringing his village honor through his unparalleled mastery of the blade. The ensuing battles ravaged the land, but no conflict inflicted as much horror as the day the armies of Noxus closed in on Yi's village. Left undefended, the village became the unfortunate test subject of the latest invention by an up-and-coming chemist, now known as

Singed. The remains of the village that Master Yi returned to were so horrific that it remains a festering scar on Ionian history. To this day, no Ionian will ever publicly speak of what occurred.

After the Noxian invasion was contained, Master Yi fell into a deep isolation. For years, he trained morning to night, speaking to no one and refusing offers of consolation by fellow Ionians. The only thing stopping him from madly charging into Noxus battle lines headfirst was his pledge to keep the Wuju style alive. Even though he seethed with impatience, his rage became a tool for sharpening his practice of Wuju, developing stronger and deadlier skills for his eventual vengeance. The only thing that roused him was news of the League's formation, and Noxus's subsequent enrollment in the League. Master Yi now brings his mastery of the blade to the League of Legends with unflinching purpose: to avenge his kinfolk and end the predations of the Noxus once and for all. 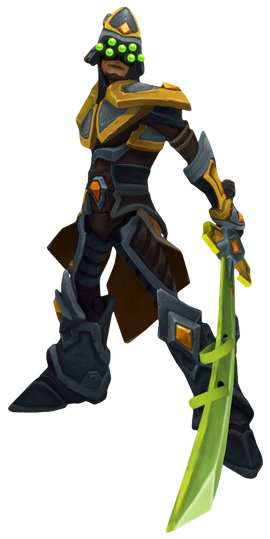 Through the ancient martial art of Wuju, Master Yi tempered his body and sharpened his mind until thought and action became one. Though he chooses to enter into violence as a last resort,the grace and speed with which he wields his blade ensures resolution is always swift. As the last living practitioner of Wuju, Master Yi has devoted his life to finding able pupils to carry on the legacy of his lost people.

Even before Yi mastered Wuju, he was considered one of the most skilled practitioners of the mystical martial art. He would soon prove his mastery when word of a massive Noxian invasion reached his remote village. Yi swept across the battlefields of Ionia, turning back the tide of Noxus's vast infantry with swift and deadly strikes, much to the embarrassment of the Noxian High Command. Recognizing the threat the Wuju disciples posed to their invasion, the Noxians chose to unleash a nightmarish chemical attack on the home of the deadly art. Those who somehow survived the poisonous concoction had their minds twisted beyond repair. Yi's home was left in ruin.

At the war's conclusion, Yi returned to the grotesque remains of his village. There he became the attack's final casualty. Slain in spirit, if not in body, Yi clung to the only feeling left within his heart: vengeance. Driven only by his desire to punish those who'd destroyed his home, Yi spent years training in seclusion. He became a deadlier swordsman than he had ever been, but true mastery of Wuju still eluded him.

At the height of Yi's frustration, a

monkey of unusually noble bearing interrupted his training. Standing as straight and tall as a man, the monkey watched and mimicked Yi's movements. Yi shooed the monkey away, but the agile creature took great amusement in turning Yi's own techniques against him. Gradually, Yi felt his anger subside as he sparred with the playful animal, and when the burden of his hatred had fully lifted, he found he had caught the monkey by his tail. Yi then understood that he would never master Wuju so long as he pursued it for vengeance, and as he let go of the monkey, he also released his desire to shed his enemy's blood.

Yi thanked the monkey for showing him what he'd been blind to, and was surprised when the creature actually replied. He wished to learn Yi's art of fighting. It was an odd request, but through it Yi saw his new path: the way to honor the memory of his lost people was to pass their teachings on to a new generation.

Goggles from the Revered Inventor

Heimerdinger, the Revered Inventor. Master Yi first used these goggles when defending his homeland from Noxus invaders in the time after the League has just formed and before Ionia had affiliated itself with the League. The goggles are fitted specifically for Master Yi; while someone else may wear them, they won't receive anywhere near the same benefit as he does himself.

The one-of-a-kind goggles, known as the "Seven Lenses of Insight", allow Master Yi to see across a wider range of the spectrum than normal people see. They also give him abilities not dissimilar to that of real world binoculars and telescopes. The goggles are synced to Yi's own magical resonance, allowing him to adjust settings without the use of his hands. He simply thinks what he needs, and the goggles act accordingly.[1]

If asked, Yi will tell you he was born from wisps of the cosmos, and that is why he moves like the wind. Those who have faced him in combat know the bite of the Wuju Bladesman - he strikes twice, without warning, and is gone. Often, the only clue that you are about to be struck by Master Yi is the hiss of his blade as it parts the air.


Keeper of the ancient art of Wuju, Master Yi is a mystical warrior from the isle of Ionia. His village was steeped in Wuju, and his kinfolk were some of the few to carry the tradition into the modern day. That is, until the armies of Noxus came to Ionia, ravaging the land. Master Yi went to fight the craven enemy, bringing his village honor through his unparalleled mastery of the blade. However, in his absence, the armies of Noxus closed in and tested the latest invention of the chemist now known as

Singed. What was done to his village is something of which Master Yi will not speak. However, he has brought his mastery of the blade to the League of Legends in order to avenge his kinfolk and end the predations of the Noxus once and for all.


Master Yi brings the art of the Wuju style in a way that makes his enemies falter. He is capable of fighting with lightning speed, as well as finding purchase behind the defenses of an enemy's armor. He can call on his inner fortitude, regenerating at an accelerated rate. Calling upon ancient forces, Master Yi can fold space, appearing behind enemy after enemy. He is even able to reject magic, rendering it useless against him.


Master Yi himself has studied the arts of Wuju for more than a thousand years. He is the oldest known living human on Valoran, but to gaze upon him, you would guess him no more than thirty years old. The art of Wuju lives on in Master Yi, and is plunged through the hearts of his foes.[2]

Any League of Legends player will tell you that sometimes the jungle on Summoner’s Rift can be a dangerous place. In addition to all of those wolves and lizards and golems, if you’re not careful you might run into something like this lurking out there in the trees!

Allow me to introduce Headhunter Master Yi. Featuring some menacing new armor and brand new spell effects on both Alpha Strike and Wuju Style, this is one rendition of the Wuju Bladesman that you won’t want to run afoul of on a stroll through a wooded area. You may want to steer clear of the jungle for a while if you want to stay out of his trophy case!

Headhunter Master Yi is coming soon to a Field of Justice near you, so stay tuned for more information on this fantastic new skin!

Retrieved from "https://leagueoflegends.fandom.com/wiki/Master_Yi/Background?oldid=1845214"
Community content is available under CC-BY-SA unless otherwise noted.