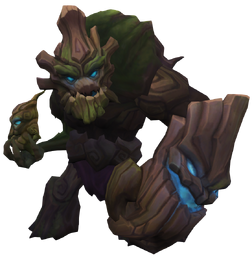 Maokai is allegedly an Anti-Ability Power "tank", without begin Warden.

Moakai's biggest strength point is when he cant be bursted by high-damage Mages and cant be melted by Auto-Attacks (Ranger/Assasins), to achieve this, he needs a required a set of items and Allie units and begin used in a Wind-Elemental Field.

The team comp revolves around the following units:

Retrieved from "https://leagueoflegends.fandom.com/wiki/Maokai/TFT?oldid=2891612"
Community content is available under CC-BY-SA unless otherwise noted.