The Magma Chamber is an unreleased 2v2 Field of Justice, played for the first time publicly at 2013 All-Star Showdown.[1] It is designed for Showdown.

It is based on an old concept for a

This article largely discusses that initial idea due to the available information. Both iterations are named "Magma Chamber", the 2v2 version can unofficially be referred as "Magma Corridor".

Deep within the obsidian mountain from which the Institute of War is sculpted lies the League's most intense Field of Justice to date: the Magma Chamber. Before the time of the League, the Chamber was the heart of a powerful, but now dormant, volcano. Ancient magma flows cut out a gigantic cavernous room that the League has reshaped for its own purposes. This battle arena was built specifically to address the increasing number of disputes between Demacia and Noxus. It is one of the largest Fields of Justice found anywhere on Valoran. To that end, teleporting platforms provide champions with the ability to rapidly relocate to strategic points in the arena. The magic-infused stone and cooled magma that dominates the structure of the arena will force champions to work together more closely in pushing toward the enemy's nexus. It will be harder for a champion to rely on their summoner to traverse hazards and obstacles. The League is preparing this Field of Justice to be the premier, a slew of new monsters and minions await champions in what will surely be their greatest challenge yet.

Insatiable creatures seethe below the molten earth. Magma Chamber is just one of many locations in the infernal landscape ruled by

Several fire creatures live in this molten landscape. They are the infernal equivalents to

The map was advertised for 5v5 play, similar to the original Summoner's Rift map, but was intended to have a different feel and strategic approach. Unlike Summoner's Rift, which focuses on larger team fights in the mid and late game, Magma Chamber emphasized smaller, more tactical fights, map awareness and victory in specific lanes.

One signature feature is a teleport pad placed within the jungle that transits players to the other side of the jungle. 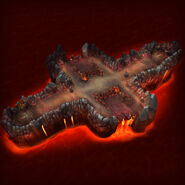 Magma Chamber "Legends of Runeterra" Board 1

Magma Chamber "Legends of Runeterra" Board 2