League of Legends Wiki
Register
Don't have an account?
Sign In
Advertisement
in: Lore of Zaun, Short Story, Ekko lore 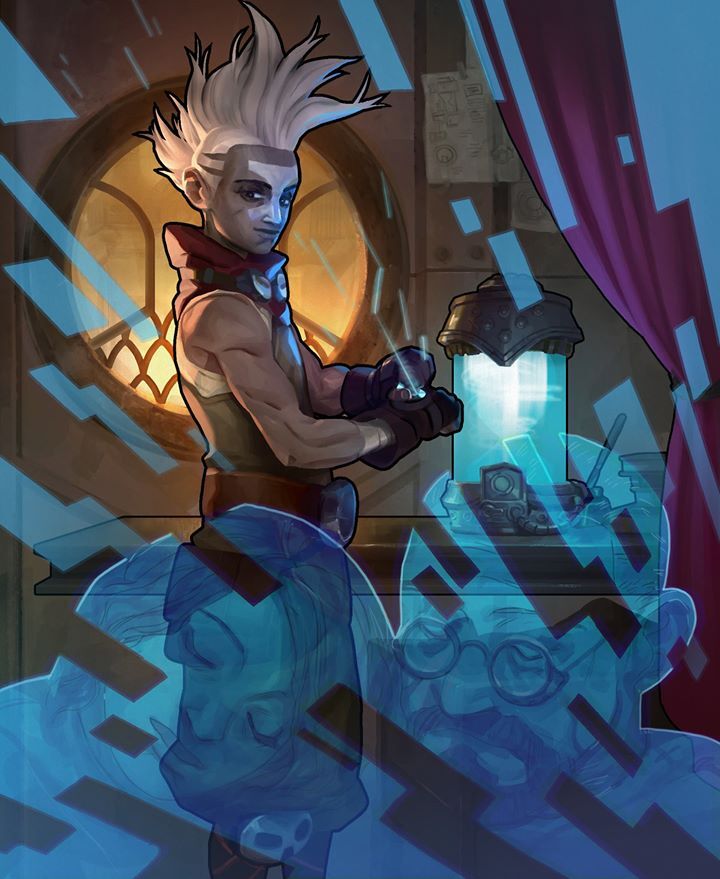 Ekko, this was both literal and metaphorical. Everything went wrong and it took forever to put it back just right. First,

4 Ajuna had nearly gotten himself killed trying to climb Old Hungry. The younger boy wanted so desperately to be like Ekko that he vaulted up the side of the clockwork tower at the heart of the sump before any of their friends could stop him. It was the first tricky jump that nearly did the kid in. Good thing Ekko had triggered his

Z-Drive. Eighteen times he heard the blood-curdling scream of the boy falling to his death before he figured out how and where to arrest the fall and save his life.

Then, while pillaging a scrap heap with ties to

Clan Ferros for bits of tech, a particularly aggressive gang of vigilnauts surrounded him. Big ones, too, covered in augments that made the ugly even uglier. Ekko was surprised at their speed, but less surprised at how they shot to kill. Pilties and their backup didn't care about the lives of sumpsnipes like him. Good thing the Z-Drive existed to get him out of seemingly inescapable encounters like that one. After a few dozen rewinds, he changed tack and pulled out his latest toy: the

Flashbinder. It was meant to explode in a dazzling flash and pull anything not bolted down in toward its center.

But the Flashbinder didn't work. Well, at least not as intended. It exploded. And that's when things got interesting. Unlike most of Ekko's inventions that exploded, the blue-hot magical detonation froze in mid blast. Columns of billowing blue energy fanned out from the epicenter. Bits of the disc's shrapnel twisted at a snail's pace along what, at normal explosion velocity, would be a deadly trajectory. Even the spherical blinding flash itself was frozen in space.

And then it got even more interesting. The explosion imploded, reforming itself into the palm-sized Flashbinder, and rewound back toward Ekko, landing square in his palm, as cold as the wind.

Cool, Ekko thought. He rewound the moment so he could throw it at the vigilnauts a few more times. For science, of course.

When Ekko finally got home, his body was tired, but his mind was alert. The apartment was functional - the furniture sparse and with little flourish. Ekko's room was a little curtained-off nook filled with discarded books, bits of scavenged technology, and hiding spots for the Z-Drive and Flashbinder. Today was one of the rare days both his parents would be home early, and he had something to tell them.

"Mom, Dad." He practiced to his reflection, which stared back at him from the Z-Drive's shiny cylindrical surface. "I'm not going to apply to any of the Uppside clans or a snooty Piltie school. I'm staying here with you and my friends. I'll never turn my back on Zaun."

The words were filled with the confidence that comes with being alone in an empty apartment, with only walls and reflections to respond. And their response was silence.

He heard the jingle of the keys, muffled by the front door. Without a second to spare, Ekko tucked his Z-Drive under the table and draped a black cloth over it. He didn't want them worrying about his escapades with an unstable hextech time-manipulation device.

The door opened and Ekko's parents returned for the first time that night. They looked like strangers to their own son, their jobs aging them even more in the weeks since he'd seen them last together. Their routine was predictable. They'd shuffle home, supply a meager meal purchased with the day's wages, save the rest of the money for taxes and bribes, then fall asleep in their chairs, chins resting on chests, until Ekko removed their workboots and helped them into their beds.

The bags under their eyes carried enough weight to pull their heads down. Tucked under his mother's arm was a small paper-wrapped bundle, bound at the ends with twine.

"Hello, my little genius." His mother expended energy she couldn't afford in an attempt to make the words come alive. Yet her expression in that moment of lightness when she saw her son sitting at the table, waiting, was something no one could fake.

"Hey, Mom. Hey, Dad." The three of them hadn't sat at a table as a family in such a long time. He quietly chided himself for not saying something substantial.

His father beamed with pride; then he mock-scowled as he brushed his fingers through his son's mohawk. Ekko struggled to remember a time when his father didn't look so old, before the prematurely thinning hair and the deep wrinkles in his brow.

"I thought I told you to cut that hair" his father said. "It’ll make you stand out in the Piltover academies too much. The Factorywood's the only place you can look like that. They'll take anyone. And you are not anyone. How are your applications coming?"

This was the moment. Ekko felt the words he'd practiced swimming up to be spoken. The hope in his father's eyes gave him pause.

His mother filled that empty moment before Ekko could.

"We have a treat for you." She set the brown parcel down on the table. They pulled their chairs close to watch as Ekko reached over and untied the knotted twine, straightened both strings, and laid them next to him. He unraveled the butcher paper without a single rip. In the center lay a small loaf of fragrant sweetbread, its crust glazed with honey and candied nuts. The cake was from Elline. She made the finest pastries in all of Zaun, and charged a pretty penny for them too. Ekko and his friends often pilfered her desserts from the rich folk who paid the hefty price without even a tiny hesitation.

Ekko's head shot up to see his parents' reaction. Their eyes were beaming. "This is too much" he said. "We need meat and real supper, not sweets."

"We would never forget your name day" his father said with a chuckle. "Looks like you did, though."

Ekko had completely lost track of what day it really was. Still, the gift was too extravagant. Especially since he was about to shatter their hopes for him. Guilt rose in his throat. "The landlord'll have our heads if we're late with rent again."

"Let us worry about that. You deserve something nice" his mother said. "Go on, you can have cake for dinner once a year."

"What are you going to eat?"

"I ate at work" his father lied. "Cheese and meats from Piltover. Real nice stuff."

They watched Ekko take a tiny bite of the cake. It was sweet and buttery and the crumbs stuck to his fingers. It was so rich, the taste stuck to his tongue. Ekko went to divide the cake into three pieces, but his mother shook her head. Her soft voice hummed the name day song's playful melody and he knew they wouldn't partake. It was his parents' gift to him.

His father would have joined in singing the name day song if he hadn't already fallen asleep, slumped in his chair, chin dropping to his chest. Ekko glanced over to his mother, her eyes fluttered closed as the melody was swallowed by her own encroaching slumber.

One future Ekko briefly considered was the Factorywood life and barely living wages for some other city's benefit, for someone else's glory. He couldn't stomach the thought. He remembered fragments of conversations, snippets heard through the filter of infant ears, of his parents' whispered dreams of inventions, and entrance to the clans. Ideas they hoped would change the world and contribute to a future unwritten by the birth of their son. Ekko knew they saw him as their only hope. But he loved life in Zaun. If he did as they wished, who would take care of them or his friends?

He couldn't dash their dreams. Not tonight, on his name day. Maybe tomorrow.

Ekko didn't finish his cake beyond the first bite. Instead he

primed his Z-Drive. His home shattered into swirling eddies of colored dust. The thrum of the everyday fell to absolute silence. The moment splintered and encircled him in a vortex of light.

When the fragments of the future reassembled into the past, Ekko's parents were coming home for the second time that night. It would be followed by a third, a fourth, a fifth, a sixth, and so on.

Each time he went back, Ekko didn't change a single thing; the light in his mother's eyes, his father's proud smile as he nodded off. But Ekko fought the edges of sleep to hold onto those stolen moments forever, until finally, he let his mother's soft voice, and the warmth of their little apartment lull him to sleep.