Lost Empire is a series of alternate future/universe skins in League of Legends. Set in an alternate Shurima, all of the champions are ancient pharaohs.

The city-states of the Great Desert have long been lost to time, but their ruins—and the ancient pharaohs who once ruled them—lie hidden just beneath the sands. 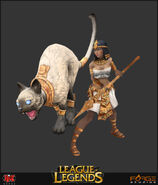