Fantasy Manager
LoL Esports Manager is an upcoming management simulator developed by Riot Games Inc. The game was first announced by Riot Games on October 15th 2019, coinciding with the 10th Anniversary of League of Legends. It will be released in 2020.

Players will manage their own League of Legends team. A ranked system has been announced. 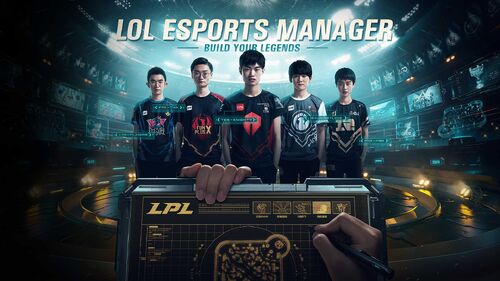 Today we are excited to announce LoL Esports Manager, a new game that puts you in the role of a team manager leading a top-tier professional League of Legends team. First launching for the LPL in 2020, LoL Esports Manager will provide players with the full experience of what it takes to run an esports team through major decisions that include: strategy selection, pre-match bans and picks, and winning the off-season by building the best team possible.

The game will create unique moments only possible through the collection of popular pro players to create never-before-seen rosters. Using gameplay that combines esports strategy with a brand new AI system, the title will create a tactical experience bespoke to LoL Esports. You’ll be able to play through the game in two ways: Experiencing an esports story through the eyes of a single protagonist, or competing against friends and other players through ranked play.

At Riot Games, we are committed to creating deeply engaging esports experiences for the League of Legends fan base. Our goal is to create a multi-generational sport that will bring joy to billions of fans across the world. In addition to providing an exciting new gameplay experience, LoL Esports Manager also will reinvest back into the esports ecosystem. Starting with the LPL, a portion of the revenues from LoL Esports Manager will go back to pro teams featured in the game, allowing the sport as a whole to share in the success.

The title will first release for the LPL in 2020 with the intention to gradually expand and include players from other leagues. The reach and depth of the LPL provides an ideal environment to launch the first League of Legends game in the sports manager genre and create a product that deeply resonates with our fans before broadening to additional regions. As we head into the 10th season of LoL Esports, we remain deeply committed to elevating our sport and eagerly prepare to bring you another great year of competition.

Games from Riot Games
Retrieved from "https://leagueoflegends.fandom.com/wiki/LoL_Esports_Manager?oldid=3247678"
Community content is available under CC-BY-SA unless otherwise noted.