The embodiment of wispy firelight, the Lightcharger can be seen soaring across the skies of Targon as dusk turns to night. It bathes in the moon's most radiant glow, galloping nobly from east to west and protecting the world from the eternal darkness. 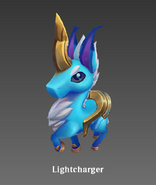