League of Legends Wiki
Register
Don't have an account?
Sign In
Advertisement
in: Character stubs, Ledros, Characters,
and 2 more
English 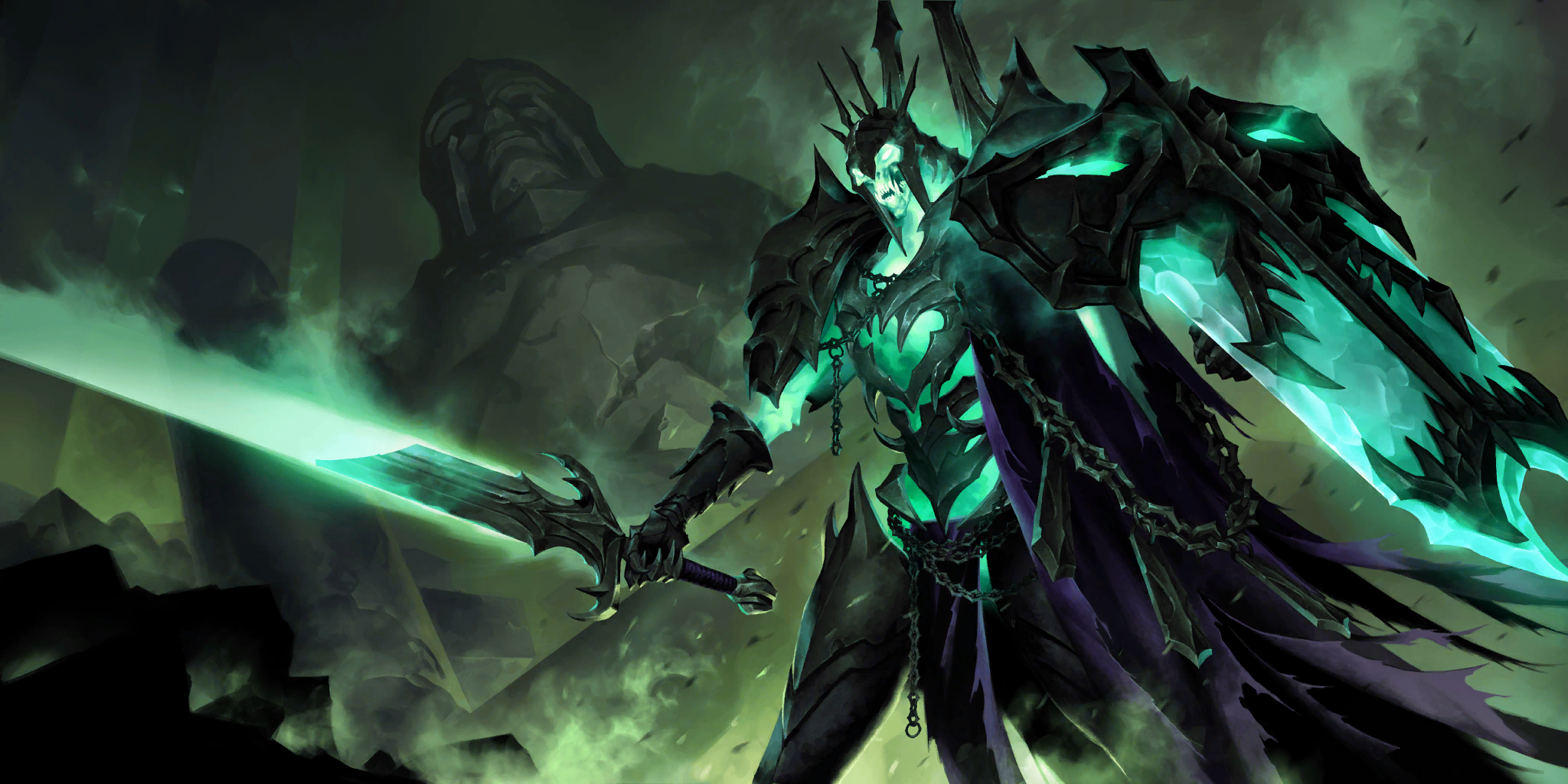 Ledros is a Wraith on the

Shadow Isles. His strong mind and his love for

Kalista allowed him to retain his will instead of getting lost in the Black Mist, and he is committed to ending the curse of the Isles.

Events leading up to the Ruination

In life, Ledros was a respected member of

King Viego's court, a strong man and fighter. He was chosen as the "King's Champion", or "Shield" of the king, doing his bidding. At the court, he fell in love with the king's niece,

Kalista. When he tried to give her a silver pendant, symbolizing his love, she refused due to their positions at the court.

Ledros was part of the expedition sailing to the

Blessed Isles and was close when

Hecarim and the Iron Order turned on Kalista. He blamed himself for her death, as he was too slow and didn't stop Hecarim. Ledros also was killed by the Iron Order, but both were subsequently resurrected as Wraiths in the Ruination of the Blessed Isles.

As a Wraith, his goal was to free the soul of Kalista, to stop her from losing herself as the Spear of Vengeance. At first, he hunted down her killers, convinced that destroying them would release her. He had killed Hecarim multiple times, but the horsemen only returned stronger from the mist. He even schemed to bring Kalista and Hecarim together, in the hope that killing him would finally free his love. She had killed him, but that too did not accomplish anything.

His many failed attempts led him toward self-destruction: He sought out the sunlight to destroy him, a

purple-skinned sorcerer that tore him apart with runic magic, the faith of

indigenous witches of Bilgewater burned him to nothingness, a

blade that seared him with the intensity of the sun. All of that could not truly kill him; He always returned and awoke in the mist once more.

The Echoes left Behind

Main article: The Echoes Left Behind

Returned from the Back Mist once more, he tried to break through to the Kalista he once knew and loved. He had discovered that his pendant still meant something to her, that it could bring her back for a short time. Together, they fought against a group of horsemen from the Iron Order, and after Kalista killed them all, he brought out his silver medallion. Kalista recognized him, but quickly was lost in her role again. This is when Ledros had a new idea: He named himself as a betrayer, claiming he betrayed her when she died. This pledge led to Kalista killing him, and as he dissolved into the mist, she recognized him.

The next time he returned, Kalista was there to meet him. At first he rejoiced, but then reality crashed over him: It had not worked. Kalista accepted his pledge, and moved on to the next betrayer. At this point Ledros realized that they can never be freed as long as the black mist cursed the isles, and decided that his new goal must be to end the origin of this curse, not knowing how close he was to freeing Kalista.

Kalista was the niece of the Ruined King, while he was a knight and general for the king. At the royal court, he fell in love with her, but she claims "she could have never given him what he wanted" and refused. Nevertheless, his silver pendant, engraved with two roses, still means something to her, even in death. He tried to use this to free her from her role as Spear of Vengeance and partially succeeded, but it would only last a short time before Kalista was consumed by the choir of souls inside her.

Ledros now has thrown the pendant away, and seeks another way to free them all: Ending the curse of the black mist.

Ledros fought against Hecarim often during his quest to wake Kalista, and killed him and was killed by him many times. Ledros even managed to get Kalista to kill Hecarim, but that still was not enough to free her soul.

Thresh started visiting Ledros in the past, delighted by his futile errand to free the love of his life. Trying to anger Ledros, he stole the pendant he used for this multiple times, but returned it so he could continue to fail. After his last failed attempt, Ledros threw it away, and Thresh finally took the pendant into his lantern. 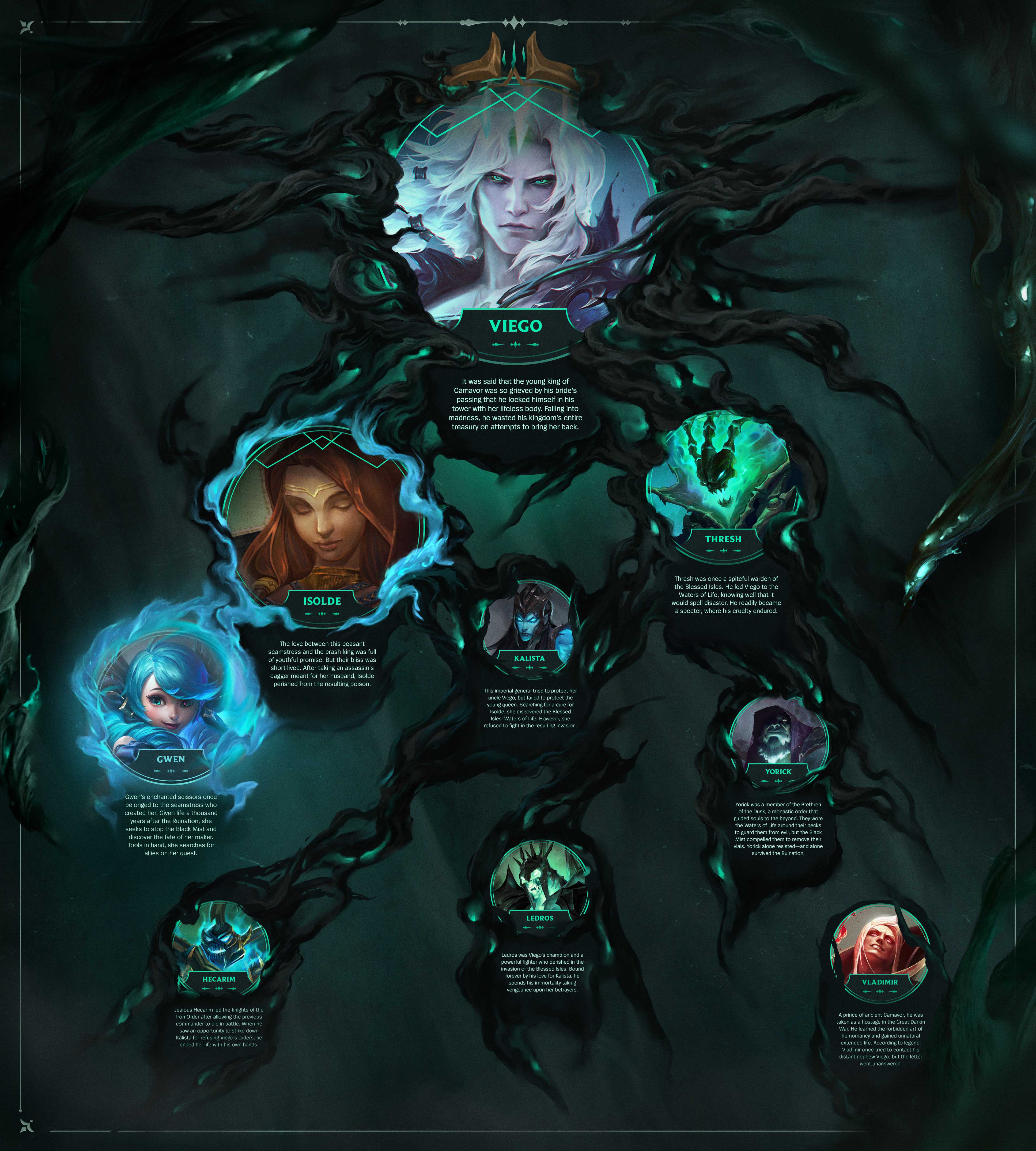 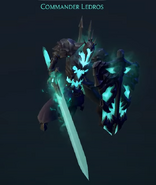