League of Legends: Wild Rift (also called Wild Rift or WR) is an upcoming multiplayer online battle arena game for mobiles and consoles. The game was first announced by Riot Games, and entered its first closed beta, on October 15th 2019, coinciding with the 10th Anniversary of League of Legends. It will be released in 2020.

The game is an abridged version of its PC counterpart, League of Legends. It will have its own Champion roster and content releases.[1][2]

Experience the thrills of League’s competitive and strategic 5v5 gameplay, rebuilt specifically for mobile and console. Choose your champion, take to the Rift, and destroy the enemy Nexus in 15-20 minute matches.

Explore the Wild Rift, a new-yet-familiar 5v5 map based on Summoner’s Rift and streamlined for faster games. A responsive dual-stick control scheme, designed exclusively for new platforms, makes sure your

Customize your champ’s look to your liking with loads of skins across dozens of themes. Then, get closer than ever before with Wild Rift’s all-new 3D model viewer.

All champs can be earned for free, and there’s no paying for playtime or power. Ever.

Each team has its base, which contains the re-spawn point, item shop, and Nexus. The two bases are connected by lanes. Periodically, waves of minions spawn from the Nexus. Minions are AI-controlled NPC's that move down the lanes, engaging any enemies they encounter. The lanes are lined with turrets that engage enemies within range. Once a turret is destroyed, it will not respawn. The turrets that line the base walls also act as inhibitors, if a team destroys this kind of turret, more powerful 'super minions' will spawn for that lane. The nexus itself also attacks like a turret.

Besides the lanes, the maps also contain "jungle" areas, populated with neutral monster camps. These monsters can be killed by a champion for gold and experience. Some large monsters will grant the killer a buff, such as killing a Blue Sentinel grants its killer the ability to

Crest of Insight help them in battle. Another special terrain feature is the brush. A brush blocks the line of sight of units, allowing champions to hide and set up a surprise attack, or "gank".

The goal of each team is to destroy the enemy Nexus, with the winner being the one who manages to do it first.

Not all champions from LoL will be released onto Wild Rift. During release there are 40 champions to choose from.

Many champions in LoL have been ported over, several champions' abilities have been modified to accommodate either the twin-stick control scheme or the smaller scope of the match. 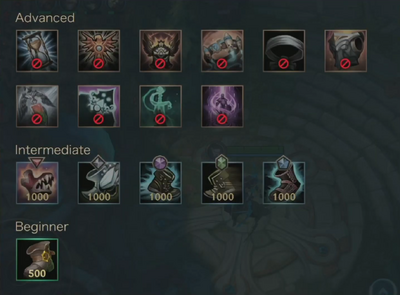 While many of the game assets are directly ported from LoL, some assets have been tweaked/updated to better match newer assets:

Games from Riot Games
Retrieved from "https://leagueoflegends.fandom.com/wiki/League_of_Legends:_Wild_Rift?oldid=3049762"
Community content is available under CC-BY-SA unless otherwise noted.