The game was removed from the App Store some time in 2010, and although an upcoming flash version was mentioned, it was never released.

The official League of Legends game for the iPhone and iPod Touch, League of Legends: Turret Defense, is now available in the iTunes App Store. Created in close collaboration with the team at GOA/Orange Labs, this game is completely free, and a great way for players to continue enjoying

turrets on the field and defend against waves of

dragons and even a couple of the

Champions from League of Legends!

Click here or search for League of Legends in the App Store and download the free app today! We hope you guys have fun with this, and be on the lookout for a flash version coming soon.[2] 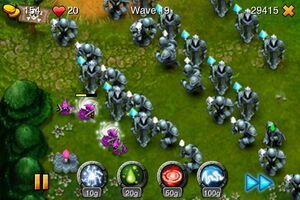 On a custom version of the old

Summoner's Rift, enemy units marched through the map from an entry point to an exit point in waves. Players had a limited amount of lives which were lost whenever an enemy breached the exit point.

gold, the player could select, place and upgrade turrets on the map to attack and eventually kill these enemies with targetting priority given to the frontmost opponent. The turrets also blocked grounded units' path, adding an element of strategy for path and maze construction to hinder the enemies' progress as much as possible.

The game could be fast-forwarded by tapping the corresponding button.

No information was given regarding the stats of neither the turrets nor the enemy units, making it difficult to gauge the exact damage output of turrets. There was also no indicator for what enemies the upcoming waves would send out.

There were two game modes: 50 Waves and Endless. The 50 Waves game mode has the player go through 50 waves of enemies. The Endless mode instead has an infinite number of waves for the player to defend against. 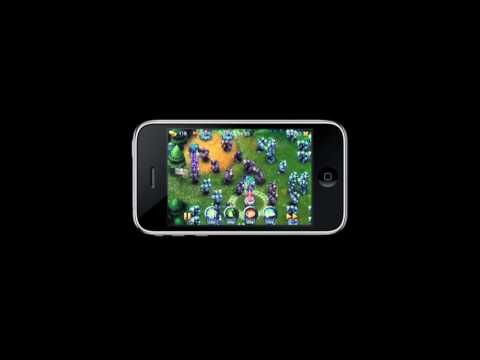